I’ve (Finally!) Been Invited to Buy a New Amazon Echo

Posted on January 13, 2015 by blogqueendiane 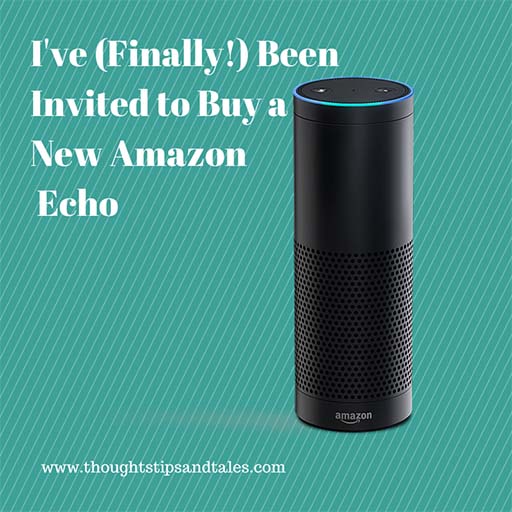 In early November 2014, I wrote a blog post after reading about the cool new Amazon Echo digital household assistant, raving about what a great Christmas gift it would be. Well… that didn’t work out because you had to be “invited” to buy it — and at long last (and, of course, after Christmas), my official invitation arrived. (See it below, with the interesting questions and answers it contains about the device).

Although I’m still excited about it and January’s not a great time to make a $200 purchase (broke, broke, broke), I decided to scrounge up money somewhere and do it anyway — because the Echo looks like so much fun. (And the invitation stipulates you have just seven days to buy the product.)

If you have Amazon Prime membership (which is $99 a year), the Echo is only $99 (instead of $199). I called Amazon customer service and the helpful rep in the Echo department told me I could sign up again for a free Prime trial (which I was able to do, even though I’d taken advantage of the offer  previously during 2013). Then I ordered the Echo, and it totalled $99. (It’s my understanding that I don’t even have to buy the Prime $99 membership after the trial period ends since you just have to be a Prime member when you order the device.) That was an unexpected boost to my finances.

Online ordering worked fine once I registered for the free trial — but the ship date for the Echo is May 21! Yikes!

This entry was posted in amazon echo and tagged amazon echo. Bookmark the permalink.

4 Responses to I’ve (Finally!) Been Invited to Buy a New Amazon Echo