Posted on August 6, 2014 by blogqueendiane 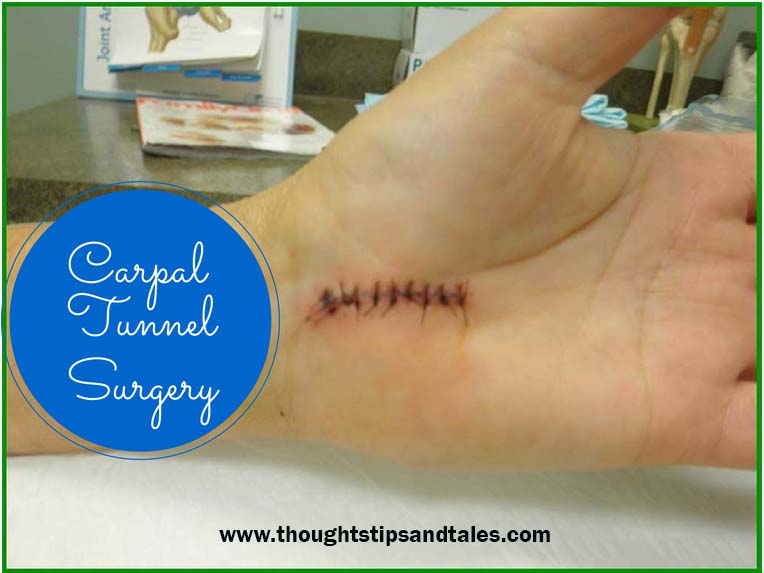 If you or someone you know will be undergoing carpal tunnel surgery in the future, you may benefit from seeing photos and reading information about my recent surgery so you know what to expect. (A family member who lives in another state also had this surgery within the last year, and so did a local friend, and my experience was remarkably similar to theirs, so I’m assuming what happened to us was standard procedure.)

To determine that the tingling or numbness in your thumb and several other fingers is, in fact, a problem with the carpal tunnel in your wrist  and not some other malady, your surgeon will probably send you to a neurologist. That doctor will place several types of electrodes up and down the arm of the affected hand and administer “jolts” of current. Testing with the initial (larger) electrodes doesn’t really hurt; it just feels a little odd.

After the first test, he or she may place more electrodes at various locations on your arm and hand and do additional testing. (I closed my eyes and looked away during the whole test in case something gruesome happened.) The second part didn’t feel so good. (At that point, I understood why, when I left the surgeon’s office and blithely said to one of the nurses, “Gee, electrode testing can’t be that bad,” she raised her eyebrows and gave me an odd, sort of questioning, look.

After the last part of the test occurred, I felt the doctor wiping my hand and applying pressure with what felt like a paper towel — and realized he must be wiping away blood. (I have a needle phobia.) I finally asked, “Are you sticking needles in me?” and his (crafty) answer was, “No, they’re just thin electrodes.” Riiiighhhhtt….

If you are diagnosed with carpal tunnel syndrome and surgery is scheduled, the outpatient procedure doesn’t take long (less than an hour, with no complications).

You won’t be able to eat after midnight and someone will need to drive you to the facility, since you’ll receive light anesthesia and won’t be able to drive home. In my case, I was home less than three hours after we got there! The friend who drove me went to the drugstore after dropping me off and filled the prescription for pain pills that the surgeon gave me. Don’t forget to do this!

Your hand will be wrapped in a thick bandage that resembles a cast — with your fingers free — and it’ll be numb for a few hours so you won’t feel pain. After the numbness goes away, your hand may hurt and you may need to take some pain pills for a day or two. The hands contains the most dense concentration of nerve endings of any area in the human body.

In my case, my hand hurt the rest of the day of the surgery and half of the next day. From then on, I didn’t feel any pain unless I twisted my hand a certain way. (My relative – who must be tougher than I am! – said her hand didn’t hurt at all and only took one pain pill the whole time.)

The bandage will remain in place on your hand for about ten days, and you’ll be advised 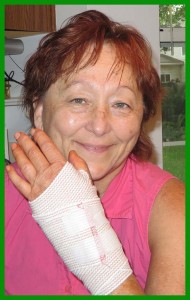 not to type or lift anything heavier than one pound with that hand. I had surgery on my left hand (and I’m right-handed), so while it was inconvenient and some things (like washing, drying and curling my hair) took longer than they normally do, I didn’t have any real problems with everyday activities. My relative had surgery on her right hand and she did amazingly well! With the fingers totally free, you’re able to do a lot more things than you might imagine. (I went to help her during the week after surgery and  ended up cooking meals and running around after her saying repeatedly, “Don’t pick that up! Let me help you!” She did all kinds of things!)

When you bathe, you’ll need to cover the bandage to avoid getting it wet. I found that umbrella bags — like many stores display on a rack at the entrance — with a large rubber band holding the top closed, worked well to keep the area dry. (Before surgery,  you might start “borrowing” a few umbrella covers to gather a supply.)  I also collected the plastic bags that are wrapped around my daily newspapers to have a supply of them in advance, as well as a stash of grocery store plastic bags.

About ten days after surgery, you’ll return to the surgeon for a follow-up visit and the bandage will be cut off  your hand and stitches will be removed.

I found out I’d had ten stitches the day they were taken out!  As an avid blogger and scrapbooker, I naturally asked the nurse to take a photo (seen here), and when I showed it to my girlfriend later, she said if I’d had a bolt in my head I would’ve looked like Frankenstein! 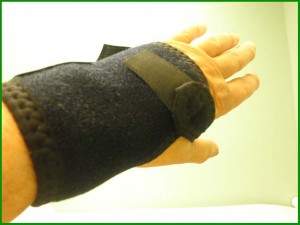 The doctor gave me a neoprene-like hand and wrist wrap to wear for several weeks after the bandage was removed; a thick, silicone pad was attached inside the wrap to protect my hand, which was very tender. I loved the glove because (A) it was a lot less unwieldy than the bandage had been and (B) it enabled me to do nearly everything without pain. The first day I typed with the brace, my hand hurt after an hour or so (I was SO happy to write blog posts with two hands again!), but after that, it was fine. I occasionally twisted my fingers a certain way that made me want to scream, but it didn’t happen very often!

In addition to wearing the glove, you’ll be told to massage the incision with unscented lotion several times a day; the purpose is to avoid scar formation and to desensitize the hand. A year after surgery, both my relative and my friend show no signs of a scar on their hands, so I’m taking the massage message seriously!

I work as a writer, so I had to take sick leave the day of the surgery and until the bandage came off, because I wasn’t able to type with two hands. (However, I did continue to type blog posts with one hand! That was not fun — or efficient.) I took eight and a half days off work, and worked only half a day the  first day back. After that, I worked full days and haven’t had any problems.

The surgery and recuperation wasn’t as bad as I anticipated, and not having tingling, numb fingers is a blessing.  Have a positive attitude about your surgery and you’ll probably have the same experience!

Sinus Surgery: What to Expect