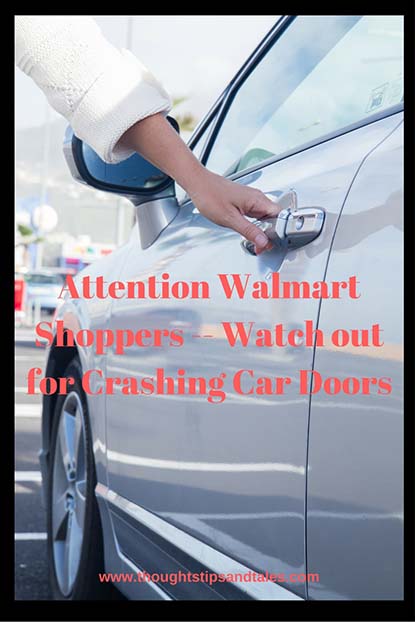 A lot of jokes have been made about offensive customers in Walmart stores; numerous videos and websites are devoted to the subject.

But nobody talks about things that go on in the parking lot.

Recently, I came out of Walmart, got in my car, started the engine and was ready to drive away when I heard a loud crack. I looked up and saw that the man in the car next to me had let his car door smash into the middle of the passenger door of my one-year-old car.

He didn’t even look up, and continued loading merchandise into his back seat.

And I was sitting right there!

I was horrified that he didn’t even glance over, so I rolled down the automatic window and said, “Buddy! Your car door just slammed into my car!”

He looked up in surprise and came closer to inspect the door. I asked, “Is it bad?” and he answered “Um, no…..” (and then I realized it was like asking a kid with chocolate on his lips if he’d just eaten a cookie).

I turned off the car and walked around it — and saw a quarter-inch chunk of missing paint and some navy blue paint (the color of his car) next to it — right in the  middle of the door.

I asked him for the name of his insurance company, and he dug out one card and then said it was the wrong card and brought out another, suggesting I take a photo of it. Also got his phone number, but all he gave me was his first name.

He seemed amazed that I was concerned at all. And he helpfully pointed out that there were a couple other tiny little scratches on the car already, like this scrape wasn’t a big deal. We both took pictures of the damage.

Realizing that the info he’d given me might be bogus, I took a photo of his car’s license plates, too.

Meanwhile, he started telling me a big story about how his wife and infant daughter had been stuck on a plane for four hours, etc. — as if that excused him and explained everything.

And he finally apologized.

In my heart of hearts I didn’t think I’d call his insurance company or chase him for reimbursement for repairs (more trouble than it was worth, and possibly making a mountain out of a molehill), but I wanted to make a strong point to Mr. Oblivious that it is NOT OK to carelessly slam your car door into someone else’s car and damage it.

As I drove away I realized (in hindsight) I should’ve asked him, “How would you have felt if the situation was reversed and you were sitting in your car and I slammed my car door into the side of it?”

I bet he’d have gone ballistic, especially because his car was way more expensive than mine.

I only buy a new car every 12-15 years, and save my tax refunds in between to pay for it, so damaging my one-year-old vehicle was a big deal to me.

I went home and buffed some rubbing compound on the scratch, which took off the navy blue paint from his car. And I got out the bottle of touch-up paint I’d picked up at the dealership when I bought the new car and did my best to repair the scratch, but it’s still pretty noticeable.

In the end I decided remaining upset about it and pursuing payment from him would only upset me further and that I should just let it go for my own mental health.

The following day I told the story to someone who implied that confronting the man could’ve been dangerous if he’d been unbalanced or reacted in a violent way, which I hadn’t even thought about at the time. I feel sure, though, that if he’d been someone other than a 35-ish year old family man I might’ve restrained myself.

Meanwhile… I guess in the future I’ll resort to my dad’s defensive parking measures — and park at the far side of the parking lot, a mile from the store.

Apparently, the bad manners of Walmart customers extend to the parking lot.