Posted on September 4, 2014 by blogqueendiane 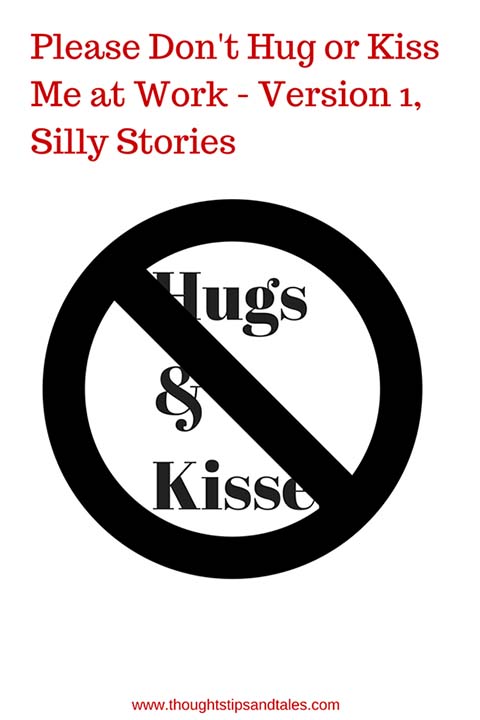 I’ve never been big on hugging or kissing anyone but my son or the man in my life.

My girlfriends all tease me about my “problem” – especially after I revealed that one time the minister told everyone to hug their neighbor at church and I purposely put my hands in both pockets, smiled at my neighbors and said, “Sorry – I don’t do hugs.” When some demented stranger still tried to “reach out” — and laid his or her hand on my shoulder from behind — I shook it off!

Aside from church (and first dates), work is the place where weird incidents involving hugging and kissing seem to happen most often.

Years ago, the janitor used to talk to me for five minutes or so every day when he cleaned my work space. X was nice enough and seemed like a fairly decent guy. He often brought tomatoes from his garden and told me how he was going to get a big lawsuit settlement and quit his job.

About two weeks before the last day of work he was so eagerly anticipating, he came into my cubicle, backed me against the wall and gave me a big “good-bye” kiss. A long one. Right on the lips.

I was horrified – for many different reasons, and for the next two weeks, when I heard him coming my way every afternoon, I had to run to somebody else’s cubicle for 20 minutes until he’d passed through the area.

A few years later, a man I knew socially from work (and formerly liked) was brought in to be supervisor in our department. All I can say is it was a terrible experience for all of the employees because he wasn’t right for the job, but we tried our best to be nice to him.

One day — out of the blue — he walked up to me in the middle of a large room full of people and gave me a smile and a huge super-hug. I could feel his soft, squishy body pressed up against mine and it was just disgusting.

I told my coworker about it and she commiserated, but also laughed!

A few days later, the supervisor walked up and hugged me again! (I swear – it was like a puppy who instinctively knows you don’t like dogs and keeps sniffing and pestering you.)

This time, I was able to put my hand up at chest level to attempt to minimize the body-to-body experience as my amused coworker called over, “Hey you guys! Get a room!” (I love her, but I wanted to slap her.)

Luckily, not long after that incident the supervisor was reassigned — and I haven’t been hugged or kissed in the workplace since. Hooray!

4 Responses to Please Don’t Hug or Kiss Me at Work – Version 1, Silly Stories