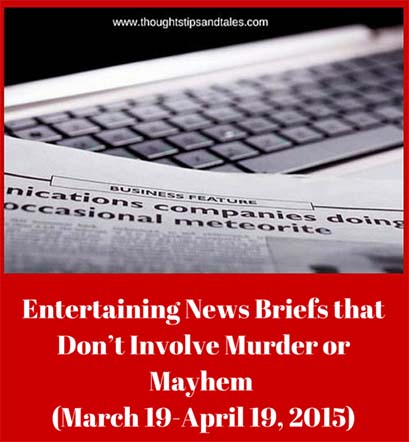 1) A movement’s in motion to remove Andrew Jackson’s photo from the $20 bill and replace his face with a woman’s! The “Women on 20s” website displays biographies of 15 high-achieving women and invites visitors to vote for a female face to put in Jackson’s place.

2) Treadmill dancing is apparently a new fitness trend. (Check out the video, but don’t try this at home!)

3) ) Dan Price, CEO of Gravity Payments – a credit card processing service, lowered his million dollar salary to $70,000 and promised all employees they would be making $70,000 within the next three years. Amazing and wonderful!

4) An Arkansas woman became the world’s oldest person at 116, with the death of 117-year-old Misao Okawa in Japan. The staff at the rehabilitation center where she lives said she’s in good health and attributes her longevity to treating others well.

5) A company called BioPet Vet Lab provides Poo-Prints testing kits to identify dogs whose owners fail to clean up after them. An apartment in Seattle uses the kits and fines pet owners $100 each time their dog leaves a mess.

6) Iran announced April 4 that women would be allowed to attend big sporting events; a previous rule barred them from entering stadiums to watch matches attended by men. Women and their families will now be allowed to attend most athletic events, except those of “masculine” sports — such as wrestling or swimming — where athletes wear skimpy clothing.

10) A French climber scaled one of Dubai’s tallest skyscrapers, with just chalk and sticky tape on his fingertips to help him up the 75-story building. He didn’t use a harness to climb the 1,007-foot high structure, which twists as it ascends.

What interesting and uplifting news have you read lately?