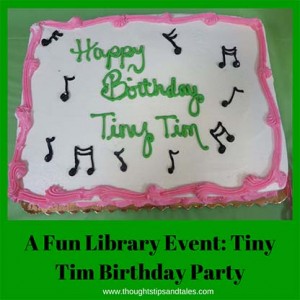 Do you remember the old song “Tiptoe Through the Tulips” and the, um, unique entertainer– Tiny Tim (real name Herbert Khaury) — who made it famous in the ’60s? The tall (6’6″), gaunt guy with long, curly black hair, a painted white face, black eye liner — and a falsetto voice?

He married “Miss Vicki” on the Tonight show — the first TV wedding ever – and it was watched by 40 million people. 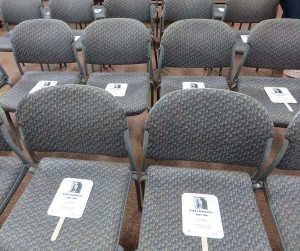 My local library recently held a Tiny Tim Birthday Party event, open to the public. Read about it in the newspaper and it sounded too wild and wacky to miss! (Gotta love the public library.)

One of the library managers and her husband — who has an encyclopedic knowledge of Tiny Tim’s life and music — put on a super-fun event in the library’s meeting room. 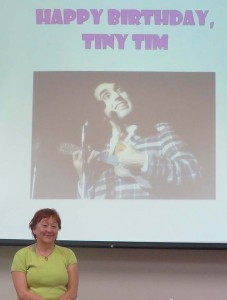 The area was decorated with posters, displays of Tiny  Tim CDs and books about him, a movie screen for a slide show and — a bakery birthday cake. An old-fashioned paper fan (like grandma used in church — and the ones people sometimes print and give as wedding mementos) with Tim’s photo, birthday wishes and info about his life was placed on each seat as a souvenir. 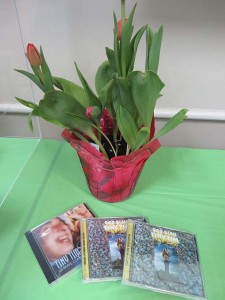 They also had a drawing for door prizes (Tiny Tim CDs and a planter of tulips, of course).

The party began with a enlightening PowerPoint presentation about Tiny’s life — that included photos of Tiny in his heyday with the Beatles, the Rolling Stones, and other musical giants of the era — and audio clips from a surprising number of songs he recorded.

At one time, a Tiny Tim fan magazine was published and Tim’s face even made the cover of Rolling Stone magazine. Parker Brothers put out a Tiny Tim board game, too, but it wasn’t a commercial success. 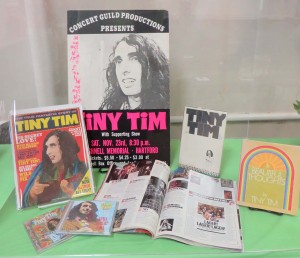 Tiny recorded more than 20 albums – and I’d always thought he was a One-Hit Wonder! His first album was called God Bless Tiny Tim.

Surprisingly enough, an email from Miss Vicki (the woman Tim married on television — and later divorced) to the librarian’s husband was part of the slide show. She wrote, “Good luck on your celebration of Tiny Tim’s birthday. I’m sure he would’ve loved it.” 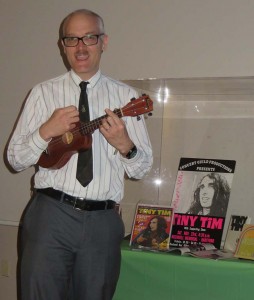 The unique event finale was a performance by a local musician known as Noodle McDoodle — who played the ukelele (like Tiny Tim did) — and sang happy birthday to Tim, in both his regular voice and in falsetto.

After this highly entertaining event, I now have a new appreciation for Tiny  Tim — and know more about his life than anyone would ever want to know… 🙂