Dating a Man Who Earns Less Than You Do

Posted on November 24, 2015 by blogqueendiane 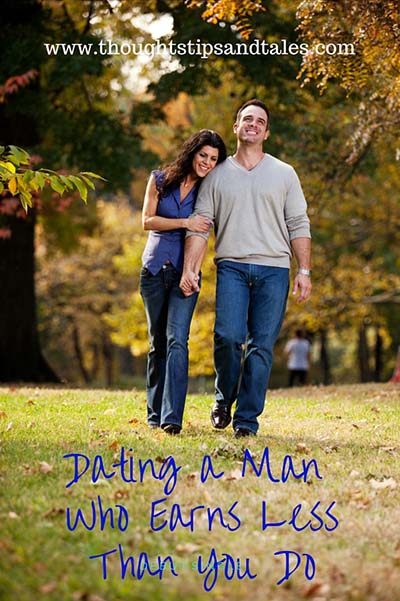 What are the pitfalls of dating a man who makes significantly less money than you do?

I’m definitely not a mega-bucks earner, but I earned more than twice what my previous boyfriend did. And although it wasn’t the biggest deal in the world,  it occasionally created some awkward situations — at least in my mind.

Neither of us were hung up on money or “things,” but T was old-fashioned (and kind of stubborn) and he felt that the man should pay for everything. With no exceptions.

And he was extremely big-hearted and  generous, too.

Although it was romantic and super-thoughtful, I felt kind of bad when he came to the door every week with a fairly expensive bouquet of flowers — because I would’ve been just as happy with the 3 for $10 grocery store ones — or flowers every other week or once a month.

When we went out to eat, I always tried to order one of the cheapest items on the menu to save him money.  (I cooked dinners for him when I could — although cooking is not my strong point — and every once in a while, he let me buy him dinner!)

There were plenty of inexpensive or free things to do on the weekend — and we always found fun places to go and fun things to do, but we could never go to concerts or anything that cost a lot (where I would’ve been happy to pay my share).

We also couldn’t go on vacations together, other than day trips. So for five years, I took off on cruises and other trips that I saved for year around — and came back with a souvenir for him. My friends always asked if he was coming with me and I’d say he had to work (which was true; he worked 12 or 13 hours a day).

After several years, I had a brainstorm and suggested we both put $10 a week in an envelope and save for a weekend away. We did go to Myrtle Beach one time and had fun, but after that … the savings plan fizzled out.

Have you been in a situation like this? How did you handle it?