Posted on February 10, 2015 by blogqueendiane 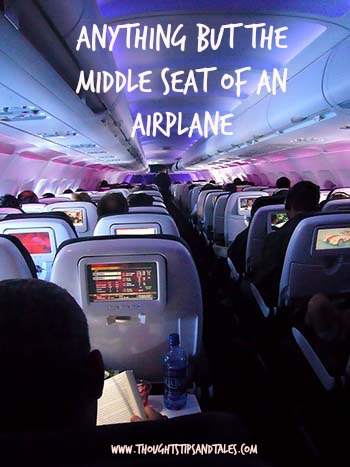 Is there anything worse than sitting in the middle seat of an airplane?

When you’ve been forced to do it, have you ever had two people of normal size sit next to you on both sides?

Does anyone enjoy having the thighs,  hips and shoulder of a total stranger smashed up against them for hours? Or an elbow poking them for the same length of time?

Is it planned torture by the airlines — or just the booby prize for buying tickets at the last minute (since middle seats are, no doubt, the only seats left)?

I was having a happy day and not pondering the things above at all, until I received a (nearly) impossible-to-resist email offer from Huffington Post millionairess Arianna Huffington inviting me to sign up for $100 quarterly “surprise packages,” and went to the website to check out what was in them.  (You know how thrifty I am — of course I wasn’t going to buy them – but did want to know what you got for $100!)

The latest quarterly package contained a Nap Wrap, which is that started me thinking about this subject.

It turns out a product’s now being marketed to help fliers avoid being intrusive and allow them to nap at the same time.

That’s nice (and very creative), but why should anyone have to even think about purchasing an item like this to sit comfortably on an airplane, when they’ve paid hundreds of dollars for a ticket?

The whole airplane middle seat situation just seems wrong to me — on so many levels.

And the illustrations on the Nap Wrap website of “responsible passengers” being encouraged to tie their arms together to “relax” during a flight just tick me off.

I guess it’s because I feel as uncomfortable as the people with their arms tied together in the illustrations look every single time I have to fly in a middle seat and am trying to do the right thing.

Here’s an idea: What if all travelers buy one of these devices, stow it in their carry-on and ask the person sprawling all over them in the next seat to put it on?

11 Responses to ANYTHING but the Middle Seat of an Airplane