Watch What You Ask For: Sleeping Overnight in an Airport is NOT Glamorous or Fun

Posted on January 9, 2018 by blogqueendiane 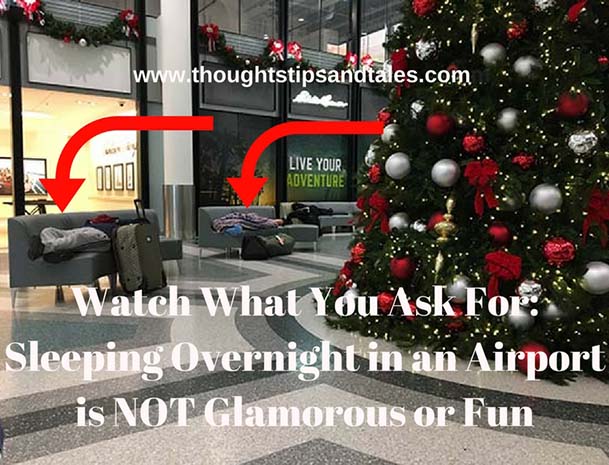 Growing up in a small town, I was fascinated by lots of things and wanted the opportunity to experience them all; one of them was sleeping overnight in an airport.

Another was using crutches (see how that turned out).

You can see now that something may’ve been “off” with my thinking.

What can I say? I had a pretty uneventful childhood and these things seemed glamorous and exciting…

I think the main appeal of “camping out” in an airport was the fact that my family didn’t camp, so it sounded pretty cool – spending the night while jets zoomed around outside.

I recently moved my parents rather abruptly to a retirement community near my home as their health declined — and I planned a whirlwind weekend trip two weeks after they arrived to another state to gather as many of their possessions as possible and drive their car to my house.

I’d declutter and clean all day Saturday and drive their car the 350 miles back home (a 7-hour trip) on Sunday. Then I’d go back to work Monday to rest.

My friends raised their eyebrows at the plan and expressed some skepticism, but I was determined. After all, this plan saved me from renting a car and driving 7 hours to get there; an airplane trip should be relaxing, so what could go wrong?

The plan that sounded practical, albeit a little edgy, on paper turned out to be grueling in reality.

I left town on a warm winter day in South Carolina, but I failed to factor in the fact that it was also a cold winter day up North where many of the airplanes departed. 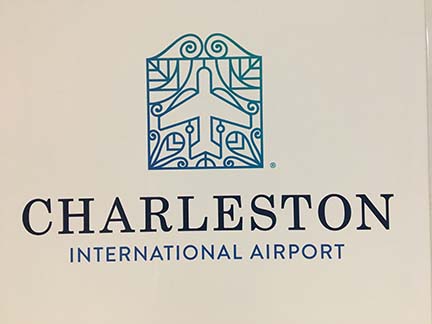 Once I arrived at the airport (two hours ahead of the scheduled flight time, as requested), text messages from the airline warned me that the 7:45 flight was pushed back several times – the last departing at 10:45 p.m.

I finally walked up to the American Airlines counter and spoke with a representative. She promptly told me the plane was stuck in the snow in D.C. and there was no way it was going to arrive that night.

So…I got a seat on the next flight out Saturday morning at 5:10 a.m.

1) Unpark the car, drive home, spend a restless 2 or 3 hours trying to sleep without sleeping in, and then return to the airport in a super-sleepy state at 2:30 a.m. and repark and go through the security line again at zero dark thirty

2) Stay overnight in the airport and get on the 5:10 a.m. flight after a few hours’ sleep.

It seemed like a no-brainer to me, although it did involve a total 11-hour stay at the airport.

The evening started off well. I called two girlfriends who moved away and spoke to each of them for an hour; that was fun.

In between calls, I made friends with a very nice older gentleman at the Jet Blue ticket counter next to where I was seated.

At 9:45, I was thirsty and wanted to buy a bottle of water. Unfortunately, I discovered every single airport store closed at 9 p.m. Bummer.

I called another friend and – bless her heart – she offered to set her alarm clock for 4:30 a.m. and call me to make sure I woke up and didn’t miss the flight. (I would never have asked her to, but she did and it was wonderful.)

Then came the big question: where was the best place to sleep?

While one practical friend I spoke to that night pointed out the airport was newly remodeled and the carpet was as clean as it was ever going to get, a second germophobe  friend reminded me of the thousands of cooties that would cause flesh-eating bacteria if I dared to touch the carpet.

The whole concourse had cleared out by about 10, so I decided skip lying on the floor and sit in a phone-charging booth for one directly across from the gate of my departing flight. (Every single chair in the concourse had an arm rest on it, so there were no connecting chairs to spread out across.)

I wish I could say the padded booth was comfortable, but it wasn’t. Especially since I was forced to clutch my giant carry-on bag with my wallet, credit cards, and more to my chest for fear of having it stolen. And there wasn’t a seat on the opposite side to lift and rest my legs.

I ended up sleeping fitfully that way until 3 a.m. (Did you know airports announce the time — loudly — every hour on the hours 24/7 on the public address system?)

An airport police officer riding a bike woke me up then and informed me the concourse was closing and I’d have to go back into the main part of the airport and pass through the security screening area again once it re-opened at 4 a.m. No! My plan involved NOT going through security again.

I reluctantly left the concourse, and although I was able to sprawl across a long bench next to a Christmas tree in the main lobby, the occupants of the other nearby benches were male strangers (who looked like they had no trouble sleeping). It was kind of creepy. 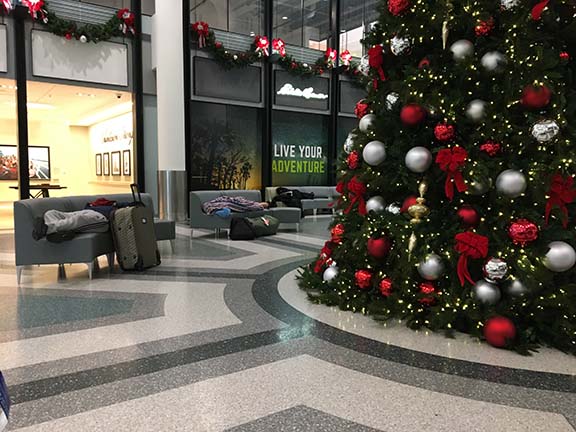 A sleepless hour later, I got up and was first in line at the security area.

That worked out well – especially since the airline’s replacement ticket was a TSA Pre-Check that didn’t require removing shoes and liquids.

I did get on the 5:10 flight after visiting with my friend the Jet Blue ticket agent, who was back on duty again. He said he wondered if I’d still be there and explained he was retired and worked this part-time job on two back-to-back shifts so he could travel the world the rest of the week.

Made the trip, changing planes in Charlotte – and took an Uber to my parents’ house.

Then I sorted things all day Saturday and drove the car home Sunday, as planned.

With mission accomplished, I checked “spend the night in an airport” off my bucket list — for good. However, I had the memories — and a backache for the next 10 days from trying to sleep hunched over my carry-on bag…

9 Responses to Watch What You Ask For: Sleeping Overnight in an Airport is NOT Glamorous or Fun