Highs and Lows of February

Posted on March 3, 2015 by blogqueendiane 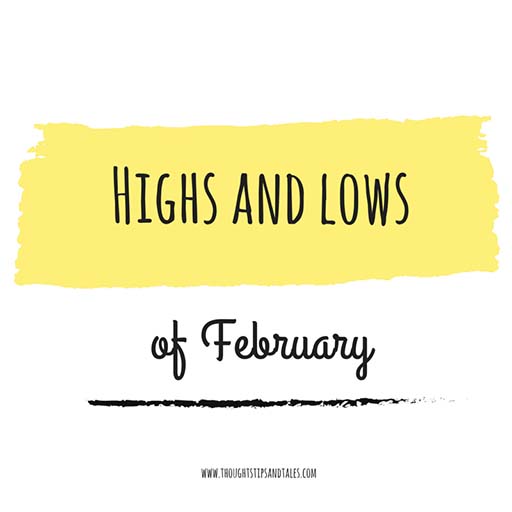 Wow – this time of year is a killer, isn’t it? Spring can’t come soon enough!

1) Despite the mostly-dismal weather, there’s hope. The row of trees down the street burst out in pink blossoms a few weeks ago, even though we had a couple hard frosts after that and they’re looking kind of peaked now.

2) Registered to go to the big BlogHer 2015 conference in New York City this summer. Can’t wait to be surrounded by thousands of other women who enjoy blogging as much as I do!

3) Auditioned for the local Listen to Your Mother program — and read this blog post about motherhood. It was fun!

5) Assembled a high-backed stool for my stand-up computer desk — first time ever, all by myself! And it didn’t crash in when I sat on it. (Couldn’t believe there were no written instructions, either — just four drawings.)

6) Finally took down and tossed the vertical blinds above the patio door that came with my house when I bought it years ago. Installed modern curtain rods with my nifty electric drill (first time ever using that, too) and hung pretty new curtains from Target. Much better! Also put in a new curtain rod and curtains above the couch. Presto — a whole new look.

7) Made a sweet potato wrapped in foil in a crock pot, and put butter and cinnamon on it like Longhorn Restaurant. It was heavenly — and tasted just as good as theirs do. Who knew it was so easy?

8) Exceeded 35,000 hits on my blog so far (9 months). Guess a lot of people are staying inside and reading blog posts this month!

Not sure if they were highs or lows

2) Took an exotic chair dancing class. It was definitely an adventure — and was much less intimidating after I moved out of sight of the massive mirror in the front of the classroom!

1) Did a little experiment to see how long it would take before someone picked up the (used) plastic tooth flosser on the heavily-trafficked sidewalk right in front of the building at work. The answer is: forever. After walking around it every day for 11 work days,  couldn’t stand it any more and I got a paper towel and picked it up and threw it away…

2) Received two really soul-crushing blog comments in one day. Ouch! That really hurt. So I responded to the commenters to explain my point of view — and reworded the blog post in hopes of never getting comments like those again. (That particular post was the all-time record high for number of hits, so I guess two people is a small percentage of readers; nevertheless, I have good intentions when I write and never deliberately want to offend people.) Thankfully, the day that happened, three friends were extremely kind to me (and I needed it!) —  so maybe there is something to karma.

2 Responses to Highs and Lows of February