Posted on October 27, 2015 by blogqueendiane 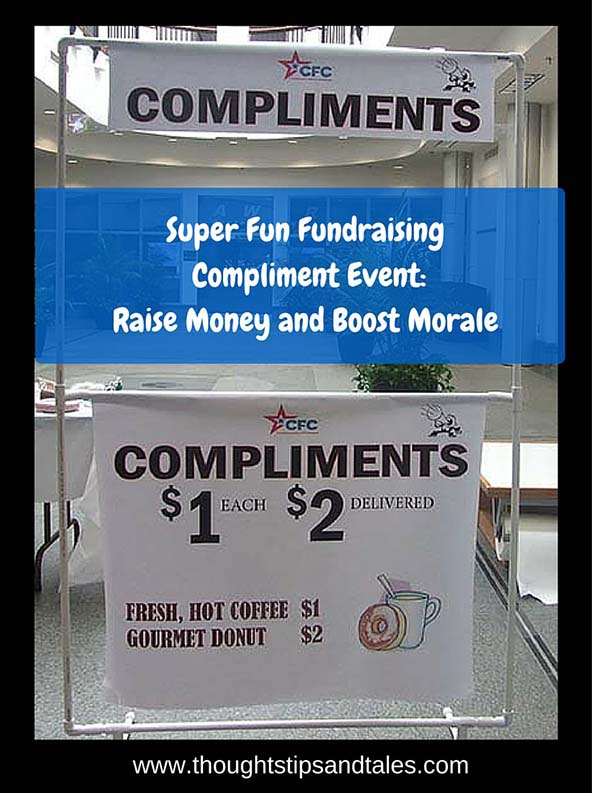 If you need to raise funds — and want to boost morale at the same time — hold a Compliment Event.

Set up a makeshift booth (like Lucy in the Peanuts comic strip) constructed with PVC pipe — or a table with a sign that says “Compliments $1.”

Charge $1 for customers to walk up and receive a genuine compliment — about their outfit, their smile, their personality, their work — or if all else fails — their shoes or belt. (Advertise by posting: “Do you feel overworked and under-appreciated? Come to the Compliment Event.”) 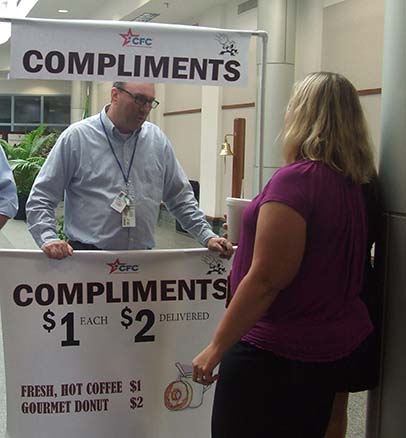 Charge $1 extra to have a compliment delivered to a co-worker/supervisor/fellow student/teacher, etc. 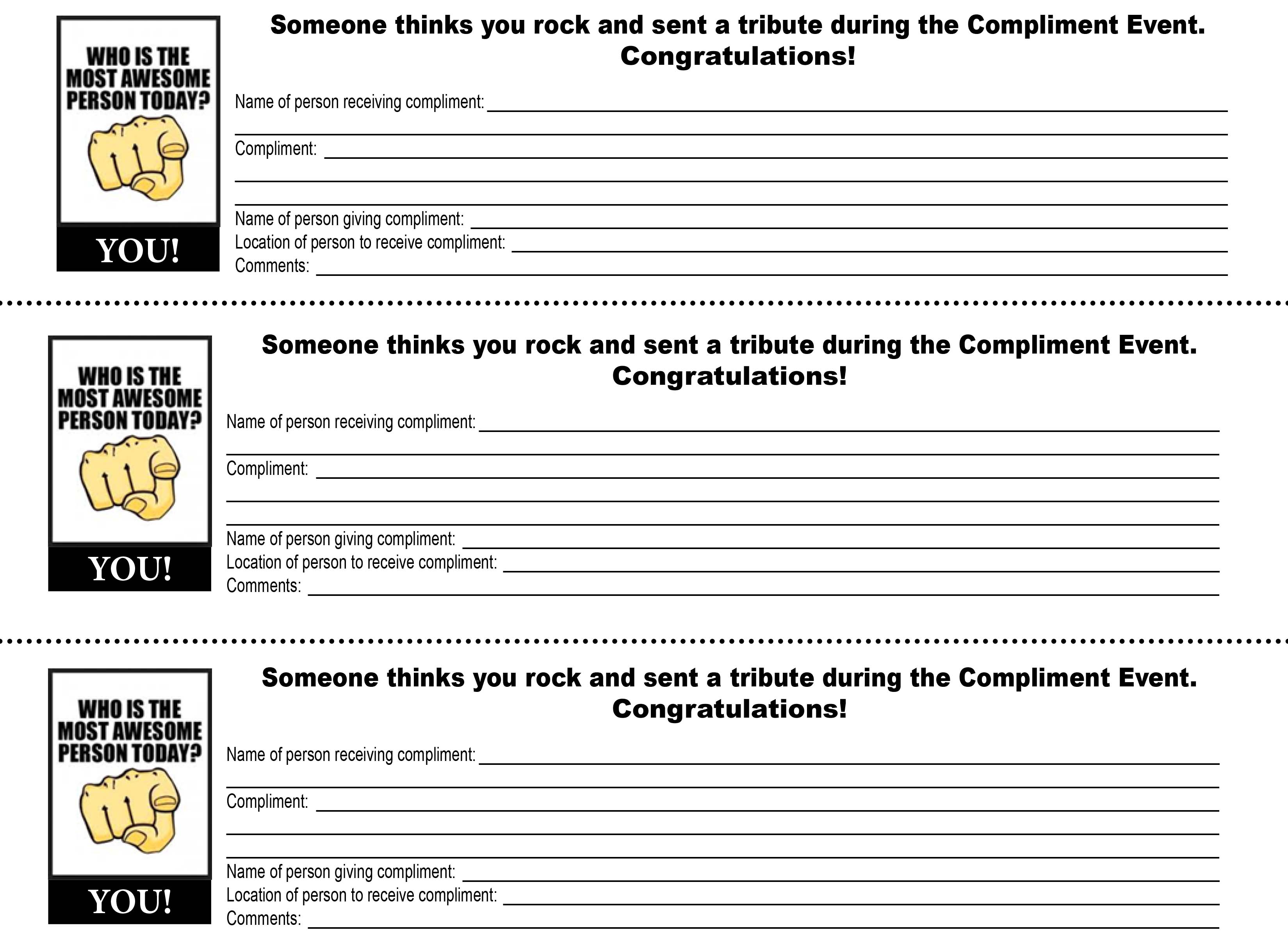 Do that by asking customers to fill out an order form, which is given to the recipient on delivery.

A graphic on the form says “Who is the Most Awesome Person Today? You!”

And the form’s header says “Someone thinks you rock and sent a tribute. Congratulations!”

The order contains (1) The compliment recipient’s name, (2) Where he/she is physically located, (3) What the compliment is, and (4) The sender’s name, if desired. Anonymous compliments add to the excitement and fun.

Enlist several outgoing, positive, enthusiastic people to be the designated “Compliment Men and Women.”  Their job is to give compliments to walk-up customers — and after their designated “work shift,” take the “to be delivered” orders to individuals in the building or on campus to verbally deliver compliments.

Have them dress in a zany hat and wear a sandwich board sign made of foam board, with transparent tape straps. Make a “pocket” on the board by cutting several small pieces of foam board and gluing them together; the pocket holds order forms and money.

The wackier the “Compliment Men and Women” are, the more interest they draw. And every time they make deliveries, they came back with a hand full of money and new orders. 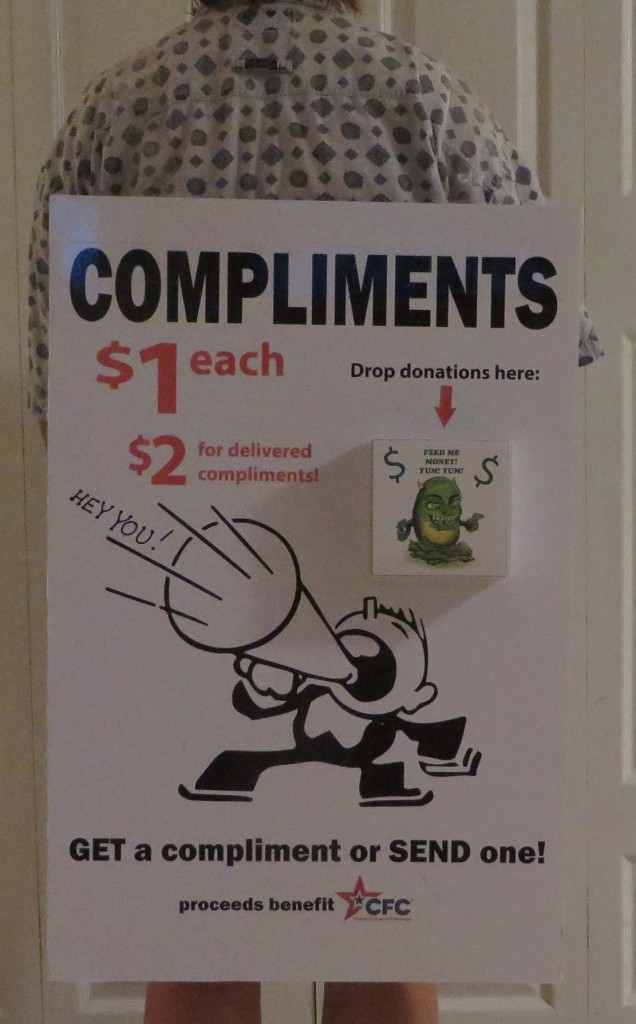 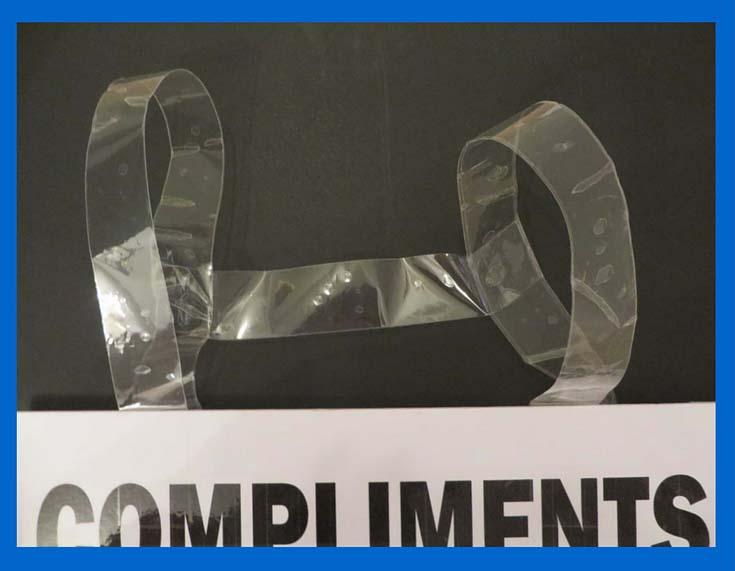 Compliment Event sandwich board straps made from transparent tape

Sell donuts and coffee, or baked goods, too — to draw an initial crowd and get people involved — and have “Compliment Man or Woman” give each customer a free compliment with every purchase. 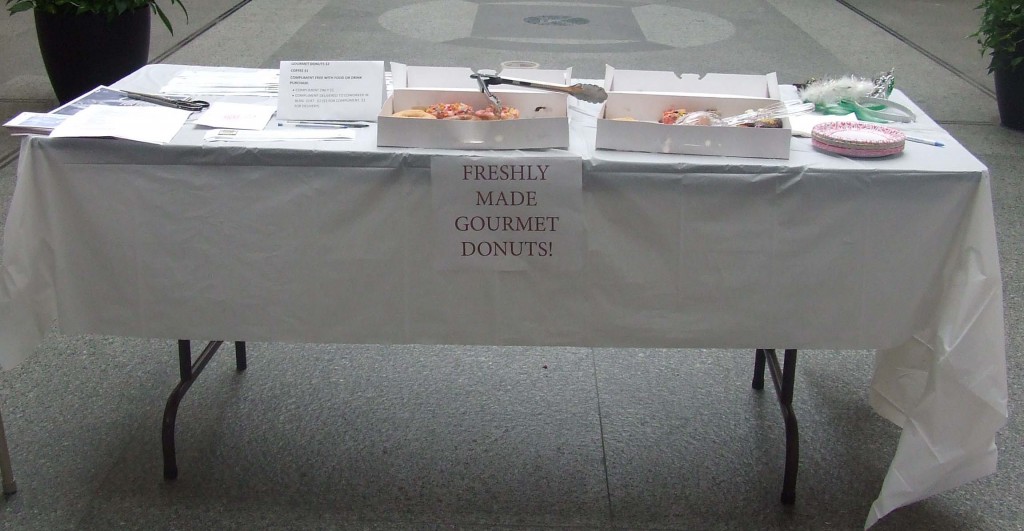 We held this event three years in a row at a large organization where I work — and it was an amazingly successful fundraiser and a truly heartwarming experience each time! It got bigger and better every year; during the 2017 event, we delivered more than 500 compliments to people in 20 buildings, and it took over a week to get them handed out.

In addition to selling food each year, we got the ball rolling each year by having 10 anonymous compliments delivered to people around the building who are always pleasant and helpful– co-workers, janitors and a cafe cashier.

I hoped that receiving the compliments (verbally from the “Compliment Man or Woman” and via the slip of paper (their memento)) from an unknown person would create interest, cause people to tell their co-workers what had happened and start everyone asking questions. And they did!

It took people a while to figure out what the point of the fundraiser was the first year, but when they did — we were bombarded with employees sending compliments to co-workers! In subsequent years, people knew right away how it worked and immediately came out to write compliments to be delivered.

The “order slips” came in and out so fast I couldn’t read them all before the “Compliment Men and Women” took them away for delivery.

But the slips of paper I saw with compliment orders were extremely touching. 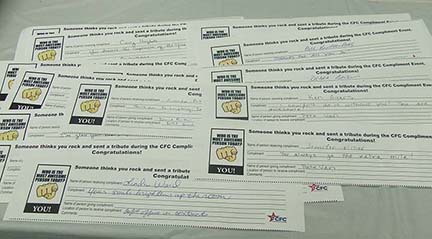 They said things like, “Thanks for your help on the XX project. Couldn’t have done it without you,” “Your smile lights the room,” “You’re awesome,” “You always go the extra mile,” and more.

Several supervisors and team leads wrote and sent individual compliments to each person in their group — personalized to reflect their work accomplishments.

As people received compliments, they came to the booth to send compliments to others. We delivered about 250 compliments over two days the first year, about 350 the second year and way over 500 the third year.

And many of the compliment recipients were incredibly touched. The woman who cleans the restrooms showed everyone her compliment slip — and several people said it nearly brought them to tears.

People keep asking us to do the event again, and I’d be willing to bet that quite a few people will have the compliments they received on display in their workstation for a long time to come.

A Compliment Event is a real winner.