The Jetsons’ Gadgets and Gizmos are Here and the Future is Now! 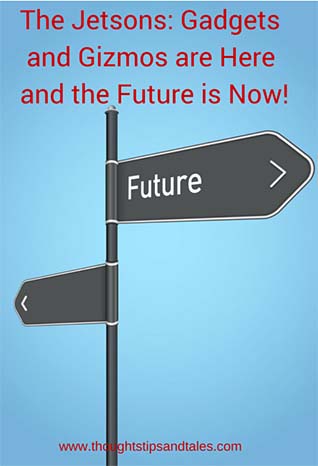 One of my favorite bloggers, Tamara Rockwood at the Platypus Directive, recently published a tongue-in-cheek post lamenting that many of Joan Jetsons’ labor-saving devices (from the TV show The Jetsons that ran from 1962 – 1980) haven’t come to fruition — and she could sure use them.

However, after thinking about it for a while, I realized that many of the futuristic gadgets and gizmos from the show that we thought were wildly crazy (and would NEVER happen in our lifetime) are actually here or coming in the not-too-distant future. Who would’ve ever thought?!

Flying cars. Several companies are piloting them now and taking orders for delivery as early as 2017. (No, they won’t zoom through the stratosphere like George Jetson’s transport device, but they will ascend above the traffic!)

Google’s been piloting self-driving cars and they’re rumored to be experimenting with flying cars, too.

2) Video phones.  Skype, Google Voice, Facetime and more have been around for years.

3) Online medical diagnosis. In rural areas with physician shortages around the U.S. — and in other places — telemedicine is being used to diagnose and treat medical conditions from afar.

4) Robotic maids (Rosey the Robot). They don’t wear aprons, but Roombas and other

robotic devices can vacuum the carpet, and perform assembly work and medical procedures. And the International Space Station uses a NASA robonaut to perform routine chores.

6) Moving sidewalks. Horizontal “escalators” have been transporting weary, luggage-toting travelers in the Atlanta airport and many others for years. (And I think of The Jetsons every time I get on one!)

8) Interactive flat screen TVs and computers.  You may own more than one!

What other “far-fetched” Jetsons gizmos have become reality?

6 Responses to The Jetsons’ Gadgets and Gizmos are Here and the Future is Now!