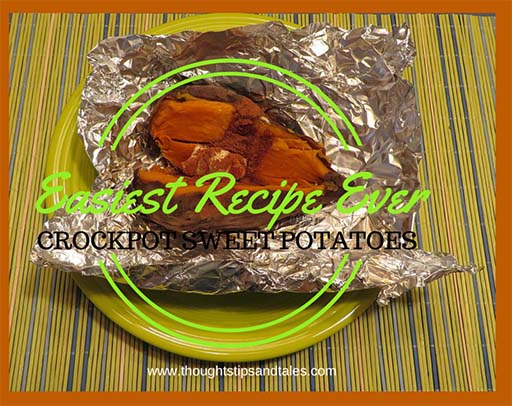 In 2014, I wrote a blog post that included a low-cal blueberry Cool Whip Lite pie recipe, with the brash declaration that it was “the only recipe you’ll ever see on my blog” (since I’m really, really not into cooking). Never say never. Since then, I’ve developed a craving for steak and cinnamon butter sweet potatoes at Longhorns Restaurant. Anyone else love them? While teleworking one morning from the kitchen table, I realized there was nothing for dinner but a sweet potato in the frig. Quickly did a web search, and here’s the “recipe” I found.

Baked Sweet Potatoes in a Crockpot

Got the crockpot out, cooked it, ate it with a little left-over chicken, and it was the yummiest — and easiest — side dish ever. And it tasted just as good as the ones from Longhorns! What’s your easiest recipe ever?