Posted on January 3, 2016 by blogqueendiane 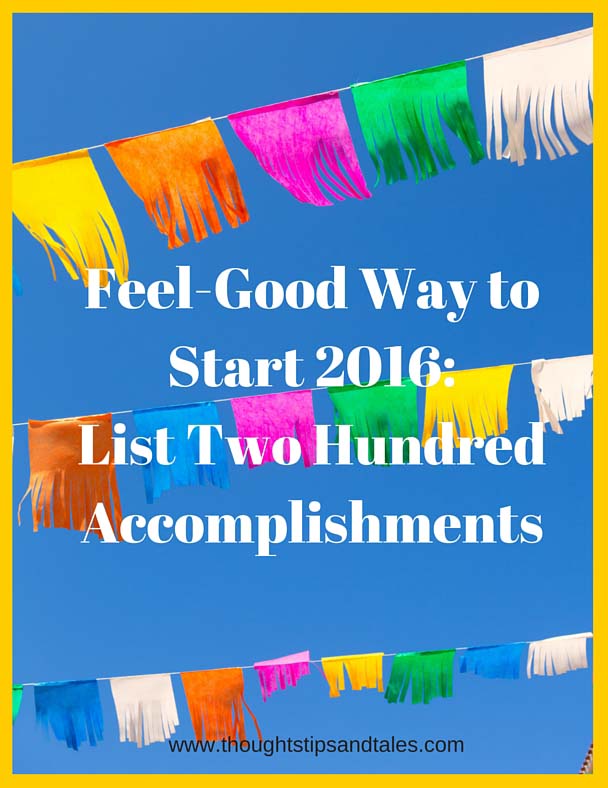 During a period of low self-esteem years ago, I read an article that suggested everyone should compile a list of two hundred accomplishments to date. The author guaranteed it would be a confidence-builder and a mood enhancer.

My immediate reaction was that there was no way I had 200 achievements to list.

But when I started writing, it was an eye-opener.

Try it yourself, and you’ll be amazed and impressed!

The items don’t have to be huge (like winning a Nobel Prize).

Start with things that nearly everyone has accomplished in early childhood — for example:

3) Learned to ride a bike

Then move on to consider higher education. Also include things you’ve learned on the job and through formal career development.

Now, think about your family and friends. What activities did you learn to do with them? What did they teach you? (Fishing, juggling, how to balance a spoon on the end of your nose?)

Itemize all the jobs you’ve had and think about the skills you gained and/or awards you earned from each one. Add those items to the list!

I bet you can record 200 items in a week. Try it and let me know the outcome! This exercise is a guaranteed picker-upper.

Here are 85 items from my list that may prompt you to add achievements in various categories:

12 Responses to Feel Good About Yourself: List Two Hundred Accomplishments