Is Your Glass Half Full — of Iced Coffee?

Posted on September 6, 2016 by blogqueendiane 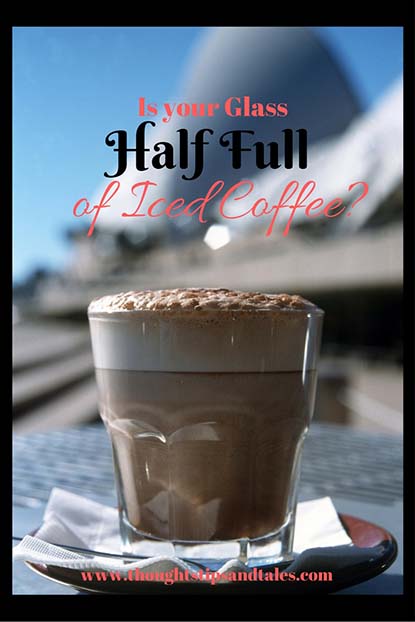 A man named Alexander Forouzesh recently brought a lawsuit against Starbucks because the baristas there filled his iced coffee cup half full of ice, essentially giving him only half a cup of cold coffee.

While I do see the need for ice in iced coffee (!), I agree with and understand his displeasure at getting only half of what he paid for. (And Starbucks products aren’t cheap.)

The same situation plagued me for years. I adore fountain Diet Cokes, and they taste wonderful and refreshing with lots of ice — but when the price of a large one rose above $2, I decided I could do without all the ice restaurants inevitably give you (often more than half the cup).

So… every time I order a Diet Coke, I specifically ask for, “A large Diet Coke with light ice,” emphasizing the word “light.”

And when the clerk’s definition of “light” and mine are miles apart, I’ve been known to ask them to dump out some of the ice and fill it back up with Diet Coke.

That’s really the answer to Mr. Forouzesh’s problem, too.

After he was surprised by the first Starbuck’s iced coffee, he should’ve started to specify he wanted one with light ice — and if they didn’t comply, explain that he only wants XX (6, 10, whatever number he chooses) ice cubes, or whatever it takes to make his point.

Doing that would’ve saved him the expense, aggravation and time of filing a lawsuit for fraud, breach of warranty and false advertising, which, unfortunately for him, the judge tossed out.

The judge said a reasonable customer would’ve known that a portion of iced coffee or tea would include ice and they’d be able to see if through the clear plastic cups the beverages are served in.

Mr. Forouzesh plans to appeal, but all he has to do is start specifying how much ice he wants…

1 Response to Is Your Glass Half Full — of Iced Coffee?