Who’s That Knocking on my Door?

Posted on June 3, 2014 by blogqueendiane 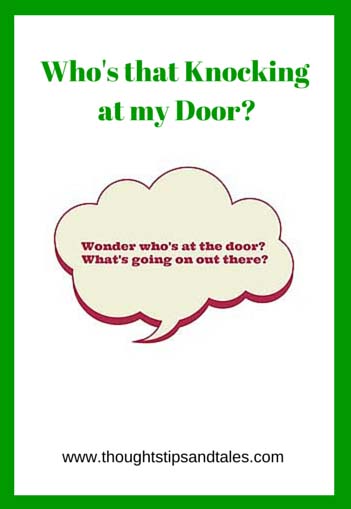 About 15 years ago, my sister, J, a single, professional woman in her 30s, lived in a lovely, gated condo community in Florida.

One evening  she was home alone and heard voices outside her front door. She walked up to the second floor and peered through the window blinds to see what it was.

Several people were standing and talking in the parking lot outside her condo. She didn’t think too much of it, and went about her business.

Later, she began to hear thumping noises outside. Peeking out the same window the second time, she saw about 10 people talking animatedly and pointing toward her house.

When she looked out the third time, a police car was parked out front with lights flashing, and the crowd had grown larger. Everyone was still staring at her condo.

J is extremely security-conscious and had a built-in security system activated in her home, with a control panel just inside the door. She was getting scared, so she finally pressed a button to disable the system and slowly cracked open the solid steel front door (no windows or peep holes) an inch or two to peep outside.

As soon as she did, people from the crowd began calling out loudly, “Shut the door! Don’t come out! Stay inside!” with no additional explanation.

She closed the door quickly, reset the security system and began to pace nervously, not knowing what to think or do.  Should she call someone? Not the police; they were already there…

The only other exit was a sliding glass door that opened to the small back yard bordered by woods, and it was quite dark there.

She waited anxiously for more than an hour, peering out the window time and again, while the thumping noise (which appeared to be coming from her front door now) grew louder and more frequent.

After disabling the security system once more, she opened the door and found a police officer there. He informed her that a large alligator had apparently crawled from the marshy area behind the condo units around the building and into the dark alcove just outside her front door. Its big, green tail had been banging against the door all evening!

After passers-by spied it and called the police, the officer had to locate a wild animal specialist to remove it.

When the officer left, J was stunned and her heart was racing She couldn’t help imaging what would’ve happened if nobody had seen the beast and she’d opened the door without looking down. Would the alligator have snapped at her or come charging into her house?

From then on, every time J entered or exited her condo, she examined the area outside her front door closely, remembering her unexpected visitor.

Next time you’re home alone and hear a thump outside, keep in mind that the noise might not be caused by a human… 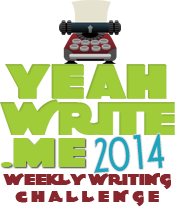 18 Responses to Who’s That Knocking on my Door?