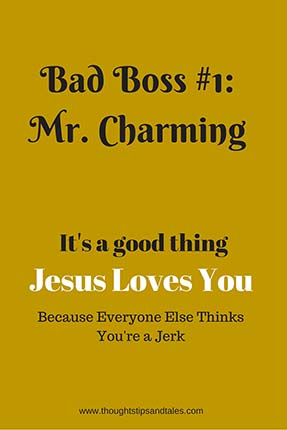 Everyone has had at least one “boss from hell” during their working life, haven’t they?

When my son was young and I’d just bought  my first house as a divorced mom, I got laid off and landed a part-time job as a computer instructor,  which I really liked, when a friend told me about an acquaintance of hers who was looking for someone to write for him. Since I love to write, that sounded good — and it was a full-time job with benefits.

I left the part-time job and went to work for the local man – an entrepreneurial type who owned quite a few businesses. His office was located in the back of a building he owned, and he had a little office built for me next to his. He did appraisals of commercial buildings, and I was to be the “ghost writer” (and researcher/fact-finder) for the lengthy, complex documents (something I knew nothing about and had never done before).

He didn’t introduce me to anyone who worked in the building, so they didn’t know what I did there and rarely talked to me. There was no camaraderie on the job.

And the bad boss NEVER, in the whole time I worked for him – about a year and a half – had a personal conversation with me of any type. Never once. Now that is cold.

I’d occasionally overhear him on the phone talking with business people and he sounded like a charming “Southern gentlemen” with them, but then he’d hang up the phone and let out a string of curse words. (I soon realized the “charm” was fake, and it made me feel somewhat better to know it wasn’t just me — the guy hated everyone!)

He sent me out occasionally to measure the interior and exterior of commercial buildings (often when it was 90+ degrees), compute square footage, take photos and get information about comparable properties, and ask people what they paid for their businesses. I’ve always tried to mind my own business and was taught not to ask people personal questions, so asking strangers what they paid for their businesses – or renovations – or anything, was horrible. And quite a few of them told me it was none of my business (which it wasn’t). Those were real feel-good activities. : (

Once, the boss gave me a handwritten list of items with costs next to them, written on notebook paper. He told me it was his wife’s expenses that she wanted him to reimburse her for, and he wanted me to total them to be sure she wasn’t cheating him. (And he was a rich man.) The list contained small items like, “lunch with xx (their daughter), hairspray, etc.:” I wasn’t surprised years later to hear he’d gotten divorced…

Another time, a huge hurricane was projected to make landfall right where we live. I took my young son and drove across the state to evacuate, as the newscasters and weathermen were advising. (The hurricane was so wide that when it made  landfall it was expected to stretch across the entire state.)

I called the boss from the evacuation destination and told him I wouldn’t be in to work until the hurricane passed. He got all worked up and sputtered, “There’s no hurricane! Come back to work!” (I didn’t.)

I was so miserable and depressed working there that I begged my girlfriends to call my house and leave me messages every day. I’d call my home answering machine from work and listen to them so I knew I wasn’t invisible. Some days I’d call and listen to their messages three or four times!

After enduring this soul-sucking job for about a year, I eventually found another job through another friend (but that’s another blog post!) and left Mr. Charming. The thought of that job still makes me shudder!

Thank God, though, that I had a sweet, loving little boy to go home to at night and friends to help me get through that rough time.