Posted on November 13, 2014 by blogqueendiane 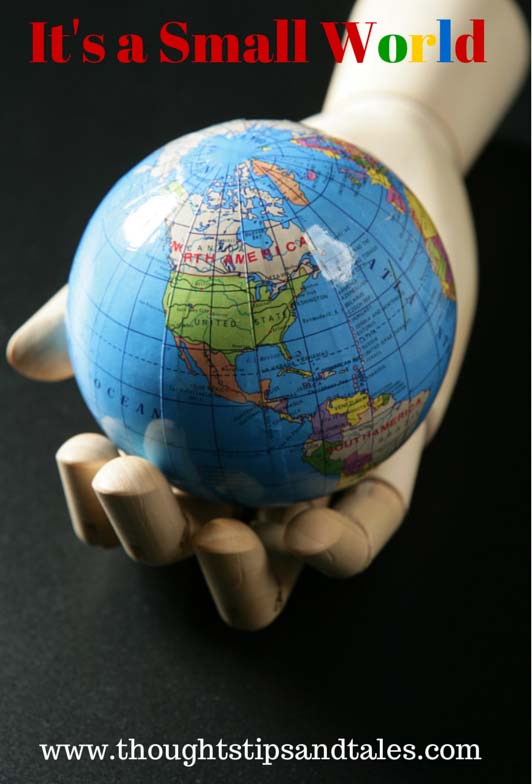 Isn’t it amazing sometimes how people you know show up in the strangest places?

Here are some examples:

1) Years ago, we got a new minister at church; he seemed to have a great sense  of humor and he introduced himself, his wife and his two children. They had just moved to the area from Denver. (I belong to a big church that has well over 1,500 people each Sunday at four services.)

For some reason, on Monday I called him at the church and invited his family to my house for dessert, based, I guess, on the fact that his children were somewhat near the age of my son. I have never ever invited a minister to my house in my life! What possessed me to do that?

They came over, my son became the best of buddies with his son and we ended up carpooling together several years when the boys were in elementary school.

2) My former boyfriend, D, and my son and I went on a cruise that departed from Fort Lauderdale (about 900 miles from home). When D went outside on the balcony to smoke before the show in the theater started, I joined him. There was a couple — from our town — who had had a baby the day before I did in the same hospital — with their “baby” (now about 10) and her brother. The kids ended up hanging out together the whole cruise and having a great time.

3) Many years ago, I was active in a bicycling club and hung out with a woman who had a niece named Anna that she just loved to pieces. I heard all about Anna’s childhood. Years later, I had another good friend who had a niece named Anna. The more she told me about her, the more familiar the story became. It turns out Anna was the niece of both of these women — one’s brother was her father and one’s sister was her mother. What are the chances of that?!

4) This past weekend I went to Myrtle Beach (90 miles from home) to a scrapbooking retreat. A woman randomly assigned to my table for the two days had formerly lived on Isle of Palms, the town next to Sullivans Island where I lived for seven years.  I’d seen her at children’s events and read about her husband (a minister) and her sons (sport teams, scholarships, etc.) in the local newspaper during the 25+ years I lived in the Charleston, S.C. area. We recognized each other’s faces right away and her name came to me quickly. She’d moved to Myrtle Beach to retire a few months ago — and while we never formally met while we lived near each other, we met by chance at this retreat after she’d moved away from the area. Another coincidence!

The well-worn cliche is true: it’s a small world.

This entry was posted in friends, thoughts tips and tales and tagged friends, small world, thoughtstipsandtales. Bookmark the permalink.

3 Responses to It’s a Small World