The Most Horrible Car Buying Experience Ever

Posted on September 18, 2014 by blogqueendiane 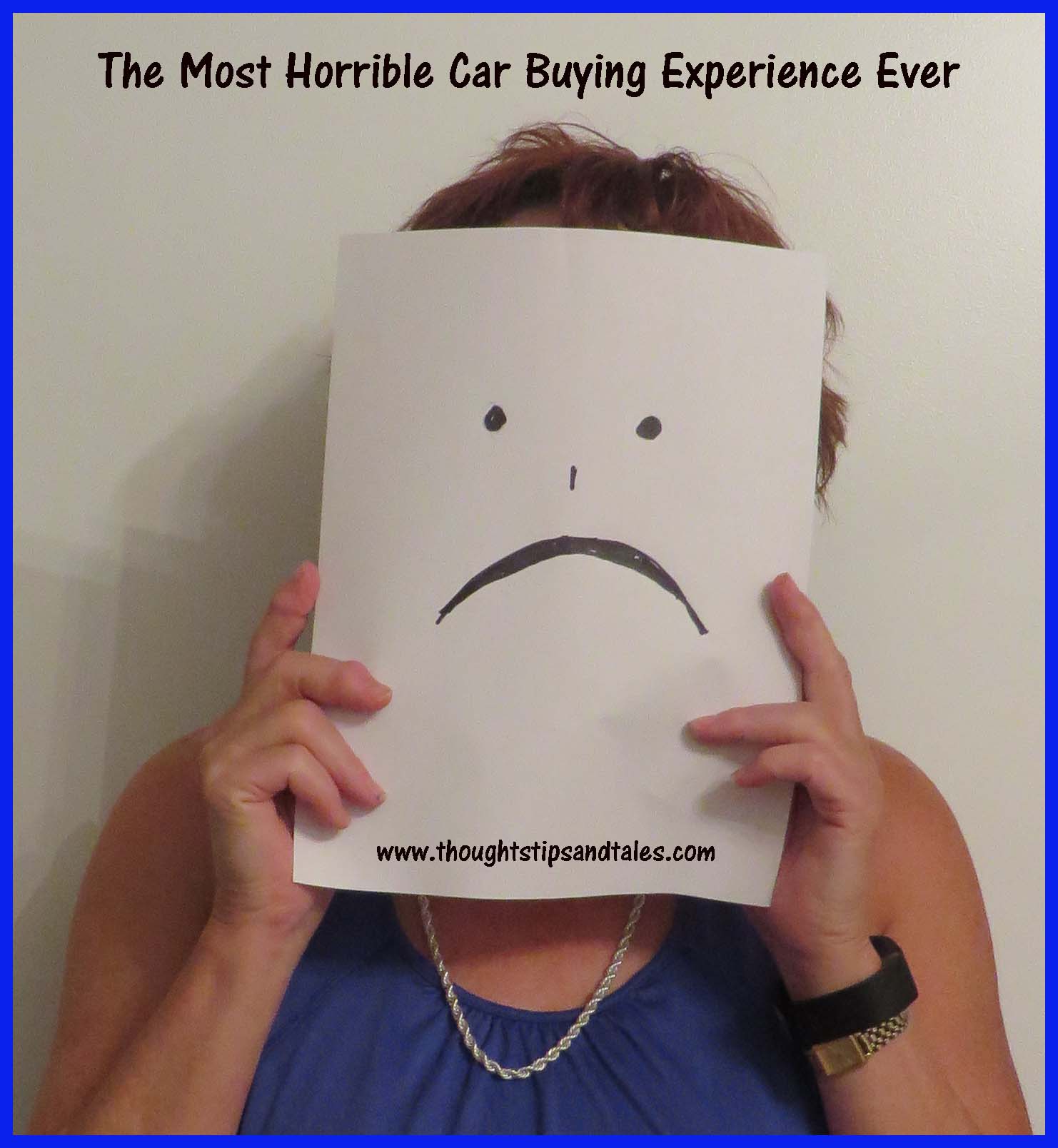 After driving Goldie (my previous car) for 11 years, it was time to get a newer model for long-distance travel — even though she still ran like a champ.

Many people enjoy — or at least look forward to — buying a new vehicle, but I had a truly unbelievable car-buying ordeal from start to finish.

I wanted a Nissan Sentra, because I’ve had three of them and they’re great, long-lasting cars that get good gas milesage and are reasonably priced. Owned one Sentra for 15 years and it was still going strong after 200,000 miles and a teen-aged son learning to drive on it.

Have also had all my service and repair work done at the dealer in North Charleston where I bought my last new car. The garage is located near my work, and for more than 20 years, the service staff has been friendly and courteous. They’re great about driving me to work when my car’s in the shop, picking me up after work and giving me a loaner car when mine will be in the shop overnight.

1)   A couple months ago when the car-buying experience began, I went to the dealership on a Saturday but they were so busy that nobody would wait on me — or even speak to me. There was a  huge crowd in the showroom and it was like they were giving cars away! So, ignored, I left — even though I had money in my pocket and wanted to buy a car that day.

2)   Called the dealership a few weeks later to make an appointment for after work with a salesman. Several days went by and I had to call a second time, because the salesperson I left a message with never returned my call. When I reached him again, the young man told me “he’d been too busy” to return my call. When did salesmen get too busy to sell a car?

When I got there for the appointment with that young man, nobody could find him. Another salesman escorted me to an empty office and left me sitting there for an hour while he waited on another customer. It was incredible. I got up and walked out — but I left my business card with my home and work phone numbers on the desk – asking the salesman to call me later about buying a car. Nobody called!

3)   Waited a couple more months and found out the dealership was offering a $3,000 rebate  on Sentras. (There’s another dealership in the area, but they couldn’t match that bottom line.) Called and asked for the manager to see if he could make me an appointment with a salesman, in light of my previous problems there. Left a message, three days went by, and he never bothered to call me back. (In the meantime, I kept getting form-letter emails from that same manager, asking “What can we do to sell you a car?” Quite ironic.)

4)   Called on a Tuesday and a man told me they’d made an appointment that night with a salesman at 5:30.

5)   Got stuck in a huge traffic jam after work that took me 50 min. to drive two miles. It was 99 degrees that day, I was roasting and not happy about being half an hour late. But I met R, the salesman, told him the price I wanted to pay and that I wanted to trade Goldie in. Ended up talking to the sales manager (who I was already mad at because he didn’t call me back, and who I blame for the non-existant customer service). After I told him the problems I’d had at the dealership, he was condescending — and said he was only able to give me $500 for Goldie. I’d looked the car up online at Kelley Blue Book (which we always used as the official guide to a car’s value when I was a bank officer) and it valued the car at $2,075 for a trade-in and $3,100 for an outright sale, even in mediocre condition. After I whipped out my printout with that information, the sales manager said Goldie was just an “auction car” because (a) the exterior paint didn’t look good (it did have a lot of discoloration, but THEY sold the car with the bad paint job to me) and (b) because it took two tries to start the car (THEIR service department worked on it since the day I bought it and they’d been unable to fix that). I was horrified, and I got up and stomped out. (OK – I was kind of a jerk.)

6)   That night, I got an email from the dealership indicating they’d set up an appointment for me with the salesman, R, on Wednesday night – when I’d originally called (and GONE IN) on Tuesday night. (So apparently it was just luck that R was in, and I didn’t have the 5:30 appointment that I was fuming about in traffic and worrying I was going to be late for.) So far, they’d messed up every single thing possible.

7)   The next day through mid-afternoon I was still incredibly mad and was going to go buy a Honda — or anything but a Nissan.

8)   Calmed down and decided after work that I’d just buy the Nissan we discussed the night before, because it was what I really wanted and it had a good price (my primary consideration). I’d sell the old car myself, although I’d never sold a car before and really didn’t want to. Surely I could get closer to $2,000 than $500, based on the Kelley Blue Book numbers. And the new car cost $1,800 more than my cash on hand  because I was counting on getting more for the trade-in. I needed to sell it myself to come out even – and have no car payment (my secondary goal).

9)   By this time, I HATED car shopping and didn’t want to do any more of it, at Honda or anywhere else.

10)  Even though I was an extremely angry customer the night before and it was a humbling experience, I called the salesman back and said I’d buy the car.

11)  Faxed the salesman, the written price quote the sales manager gave me (because he didn’t have it) the next morning. R got my credit card number to put a $200 deposit on the car and was to check whether they could install cruise control after the fact and call me back. (Previous Sentras all came with cruise control on the basic model, but they don’t anymore.) He also said the finance people would call me at work, too, since part of the rebate was contingent on financing the car. My plan was to finance the minimum amount and pay it off after three months,which the sales manager said I could do without penalty (although he wouldn’t put it in writing as I requested).

13)  After work, I called R. He said he’d called me. (There was no message on my voice mail at work and I’d made a BIG point telling him not to call me on my cell phone because I don’t usually turn it on. I’d written my work number on the fax asking him to call me there.) Checked after work and, of course, he had called my cell phone…. They were still messing up every single thing possible. Found out it’d be an $500 to get cruise control installed, so I told him no thanks.

14)  R then told me we’d do the finance thing Saturday and I could come pick up the car then. By that point, I was ready to bet my last dollar that I’d never get the car at the price and terms they previously told me, and/or that the car wouldn’t be ready.

15) I showed up at the dealer’s on Saturday morning and the salesman was waiting for me. Yay! Something had gone right… finally. The manager came over to glad-hand me and I gave him an icy stare. Then, the finance manager came over. He was extremely pleasant… until I sat down in his office and we began to do business.

Then he handed me a small, electronic pad that was totally blank and asked me to sign on it with the stylus provided. He said it was a new device they’d recently started using.

I asked what I was signing for, and he got up and went to the file cabinet and brought out a blank paper document. “The contract,” he said.

I replied, “That’s a blank document. I’m not signing anything.”

I asked him to turn his monitor around and show me the screen he was looking at, which contained all the contract information for my transaction. (What kind of fool would’ve signed for that blank, paper document? And what kind of business would ask a person to sign for a loan without revealing the loan terms?)

He grudgingly showed me the screen.

I looked it over and pointed out that the contract was for the total purchase price, and I’d made it clear all along that I only wanted to finance the minimum amount, $8,000, and was going to pay the loan in full after three months (to get the rebate).

I insisted that he change the contract amount to the correct figure and show me the screen again, then finally signed.

Three hours after I walked in, I took possession of my new car. And the whole experience still ticks me off every time I think about it.

Having a new car is great, but I’d rather poke my eyes out than buy another car there.

(See the exciting conclusion to this story in tomorrow’s blog post.)

If you would ever like to co-host a SHINE Blog Hop, just send an email to Jennifer: deliberatemom{at}gmail{dot}com

8 Responses to The Most Horrible Car Buying Experience Ever