Cryotherapy: Freezin’ for all the Right Reasons

Posted on November 4, 2014 by blogqueendiane 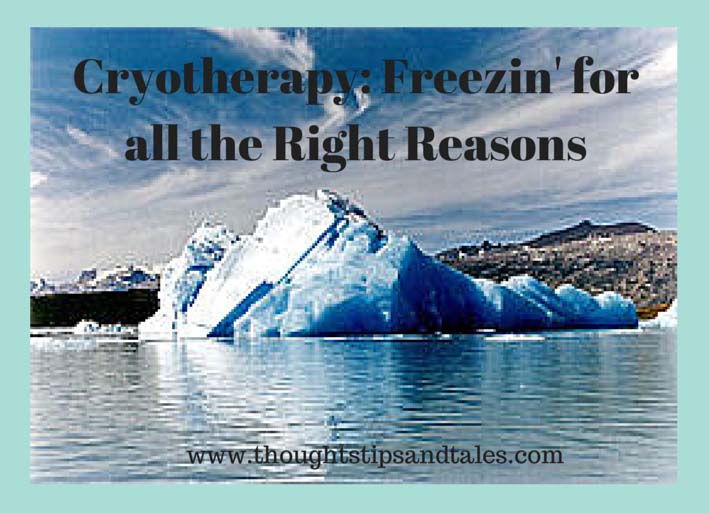 Since I saw the ad the day after Halloween, visions of cryogenically frozen heads immediately popped into my mind.

What could this be?

Apparently you enter a cryosauna (wearing only socks, slipper, light cotton gloves and dry underwear (?) — brrr) which uses gasiform nitrogen to rapidly lower the skin surface temperature to 30°F to 32°F. Cryosauna temperatures range between -238°F to -274°F for treatment that lasts two or three minutes.

Your brain reacts to the skin sensors by stimulating the regulatory functions of the body to release endorphins – and… the “buoyant effects from each session” usually last for six to eight hours.

The website states “whole body cryotherapy is an intense and exhilarating therapy that has been researched to reduce overall inflammation by stimulating nerve receptors on the skin’s surface causing vasoconstriction in extremities. It’s been proven to produce a painkilling effect on the body reducing inflammation, even producing tissue repair markers notated in blood serum levels.”

The site features a photo of a smiling woman who looks like she’s having a great time standing in a chin-high vat, presumably chilling.

That is SO not on my bucket list. Unless in the future I find I can’t get my groove back…

5 Responses to Cryotherapy: Freezin’ for all the Right Reasons