Posted on January 20, 2015 by blogqueendiane 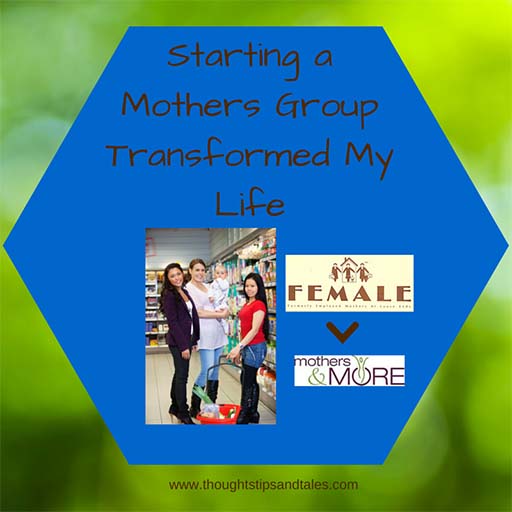 Starting a local mothers group was one of the best things I ever did.

After I had a baby, I quit my full-time job as a bank manager and abruptly become an at-home mom.  As a former career woman and fairly new resident of the area, I had no friends who were mothers — and my mom lived 800 miles away. My husband was gone a lot and I had no idea what I was doing with a new baby — just knew I loved my child fiercely.

I felt very isolated until I read a short article about FEMALE (Formerly Employed Mothers at Loose Ends, as it was called at the time; it’s now Mothers & More) in a magazine.

The name of the group described me exactly! So I decided to start a local chapter.

Met with an administrator at a local hospital that offered a number of women’s health programs, and the hospital agreed to sponsor the group.

In response to a newspaper ad, more than 30 at-home moms (with babies and toddlers in tow) from all over the Charleston area came to the initial meeting, eager to meet other moms for conversation, advice and parenting tips. The hospital provided childcare for the kickoff.

We elected officers, agreed that non-officer members would take turns providing childcare at future meetings, and set to work planning activities. The members were primarily college-educated women who’d left the work force to focus on raising their children.

We had picnics, birthday parties, park and playground meets, beach and pool events, trips to the fire station and other mother-child activities that everyone looked forward to. Our kids made friends and had fun, and so did we. Play dates and occasional Mom’s Nights Out were sanity-savers.

At the monthly meetings, a discussion leader moderated a conversation about  parenting topics the members had chosen, and everyone got to share thoughts and ideas, and learn from others.

Over the next few years, we launched two additional chapters in other parts of the Charleston area with more than 75 women participating.

I learned so much from those amazing, supportive moms — and truly appreciate having them in my life! In fact, I don’t know what I would’ve done without them.

And I formed special friendships with four women in the group that continue to this day — 23 years later.

We raised our children (with lots of encouragement from each other), re-entered the workforce and sent the kids through college. Several of us got divorced and several women moved away, but we cherished the tight bonds of motherhood — and the shared sisterhood — through the years and across the miles. The earnest young mothers we were when we met have gained confidence and matured, and the children who brought us together have left the nest — but we’re still tight.

27 Responses to Starting a Mothers Group Transformed My Life