Posted on November 18, 2015 by blogqueendiane 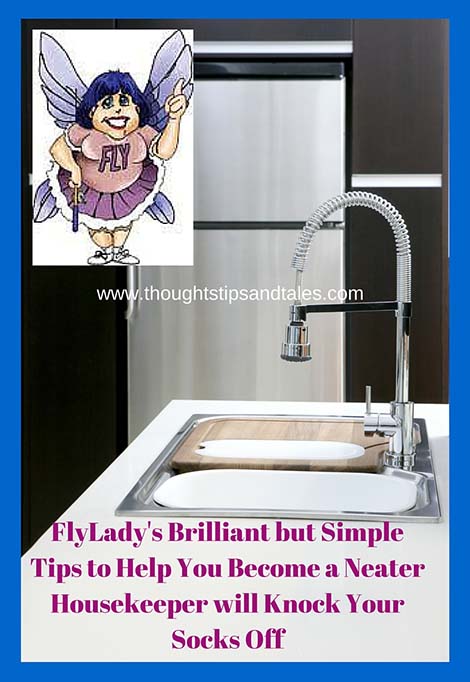 If you’d really like to be a better housekeeper — but are overwhelmed and don’t know where to begin — go to www.flylady.net, look over the website and sign up for free  reminders.

Then take the plunge and adopt a few simple but basic FlyLady routines — one at a time — and prepare to transform your life.

The whole FlyLady phenomenon started when a woman named Marla from North Carolina — a folksy, down-to-earth mother figure — decided to share her experiences with household chaos — and  the methods she developed to work her way out of it.

She started a website and began dispensing tiny nuggets of wisdom (that she calls BabySteps) in a loving way — and the rest is history.

Ten years later, FlyLady has an immense following with hundreds of thousands of subscribers around the world  — converts who are taking her advice and thriving. (I’m one of them.)

The number of testimonials on the site is astounding (and yes, I wrote one, too).

Flylady starts with the simple premise that it’s important to keep your kitchen sink clean (free of unwashed dishes); she calls it “shining your sink.”

She also believes that people should tackle household chores in 15-minute increments, using a timer. Her motto is “You can do anything in 15 minutes.” And she’s right. (I do it all the time and am amazed at how much you can accomplish in 15 minutes, and surprised that once you start a task you don’t usually want to stop — although you can.)

Take 21 days to adopt the habit of washing dishes — or loading them in the dishwasher (“shining your sink”) every day — so that your sink is clean each morning — and see if it doesn’t make you feel better and bring a smile to your face!

After years and years of living with dishes stacked in the sink nearly all the time, several years ago I took the challenge — and it changed everything.

The whole kitchen looks cleaner and more organized. And I feel at peace — rather than stressed — when I walk into the “heart of the house.”

After you have “sink success”, you may want to take on some more new habits.

Another basic habit FlyLady promotes is making your bed daily.

Again, I spent years and years without ever making my bed. The bedroom looked messy all the time and the bed didn’t feel as “fresh” as it could when I got into it.

But once I took the plunge and spent one minute every morning making my bed, it made a world of difference.

Like the kitchen, my bedroom looked and felt neater and more organized. And I feel peace when I walk in the room — and comfort when I pulled back the covers at night to get in.

One success leads to another.

Flylady has a ton of good advice — morning and evening routines, daily swishing and swiping the bathroom, cleaning the house in zones instead of crisis cleaning the whole thing at once, and more. She publishes a list of 31 beginner BabySteps that’s a great starting point.

Check it out and pick something to work on.

It’s a simple, gentle system to turn your house into a haven. And it’s  helped thousands of people — at no cost. FlyLady does sell a line of products, so don’t be alarmed when you see them on the website; there’s no obligation to buy. I’ve bought a couple products over the years, though, and they’re very high quality. My favorite is the amazing water bottle.

FlyLady even publishes a set of free Cruisin’ Through the Holidays daily reminders, to bring peace and sanity to the Christmas season.

If you lose your way and get off track, as Flylady says, just “jump in where you are” to start again. It’s really not that hard to become a neater housekeeper using baby steps…

Give FlyLady a try and let me know what happens!

Decluttering the Bathroom — Week 8 of 52