Posted on February 4, 2016 by blogqueendiane 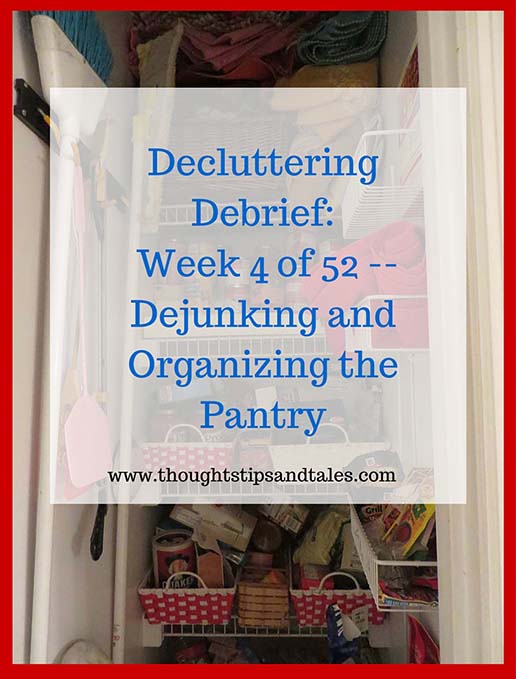 I feel blessed to have a pantry: a little closet right in the kitchen to fill with food — and a door that closes to hide it all.

It’s great until the contents start to overflow …

For years, I’ve stored both food and table linens in the pantry, until the tablecloths, placemats and napkins got out of control and became a problem.

There were a lot of them, and they were all on the top shelf — which required getting a step stool every time you wanted to get something, and sorting through a mountain of choices once you got up there. (You couldn’t see what was in the basket, either, without taking everything out — so I just didn’t use stuff in the basket anymore.)

And I have to admit to a lazy side, too; instead of using the step stool to put washed linens away neatly, I normally resorted to tossing them from the ground to the top shelf to see if they’d stay where they landed without falling off. It was sort of a game. 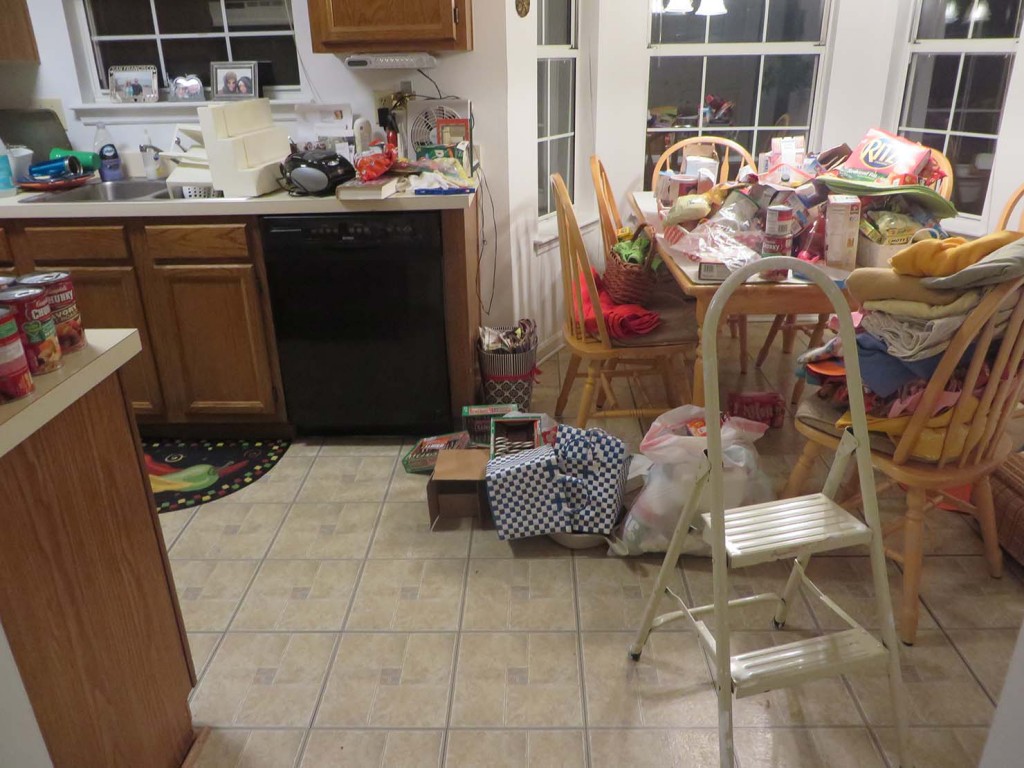 I found that after taking everything out of the closet, it took up half the kitchen. (See the embarrassing photo above.)

My plan was to put like items together. And then put those items back in — together.  That way you know firsthand, as I do now, that you have seven jars of spaghetti sauce and no spaghetti…

It was amazing how many items had expired, too — and how long ago the expiration dates were! I guiltily tossed a Hefty bag full of things out… 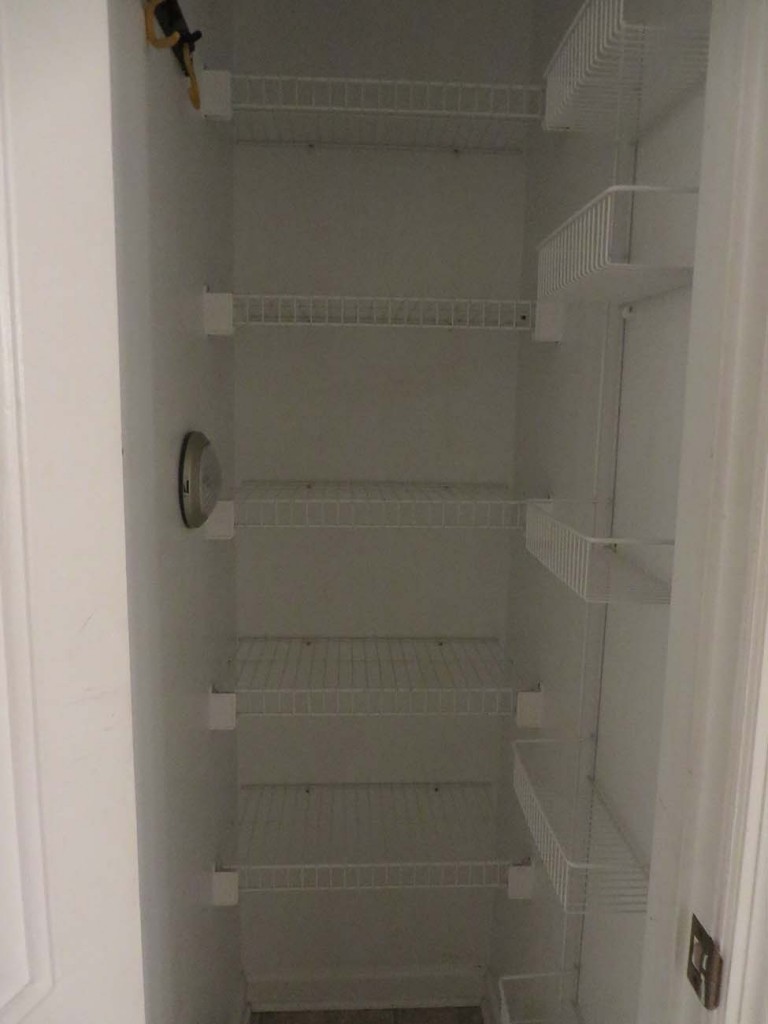 On the up side, some pantry improvements I’d done in the past made this decluttering project easier than it could have been. For example, the additional shelves on the wall add lots of extra storage space, and I love the wall-mounted light that turns itself off automatically so you never have to worry about draining the battery by forgetting to turn  it off.

Also, the three-tier expandable shelf (bought at a yard sale) makes it easy to see the canned goods on hand since they sit in nice, neatly stacked rows.

At some point in the past, I’d decided that placing food in plastic containers was more convenient than setting it directly on the open racks. And it’s true; it’s much easier to pull out a bunch of food in a tray than to remove them individually.

As for the mountain of linens — I realized I had two empty drawers in a dresser/desk in the living room (five steps away from the kitchen table) that would be a perfect spot to store tablecloths, and the placemats could be rolled and store in crates on the pantry floor. (Donated the cloth napkins to Goodwill.)

I returned the remaining items to the pantry and had lots of empty space. (Sent my friend the “before” photo and she said I need more food and fewer tablecloths — and she has a point!)

Looks a lot better, though, doesn’t it?! 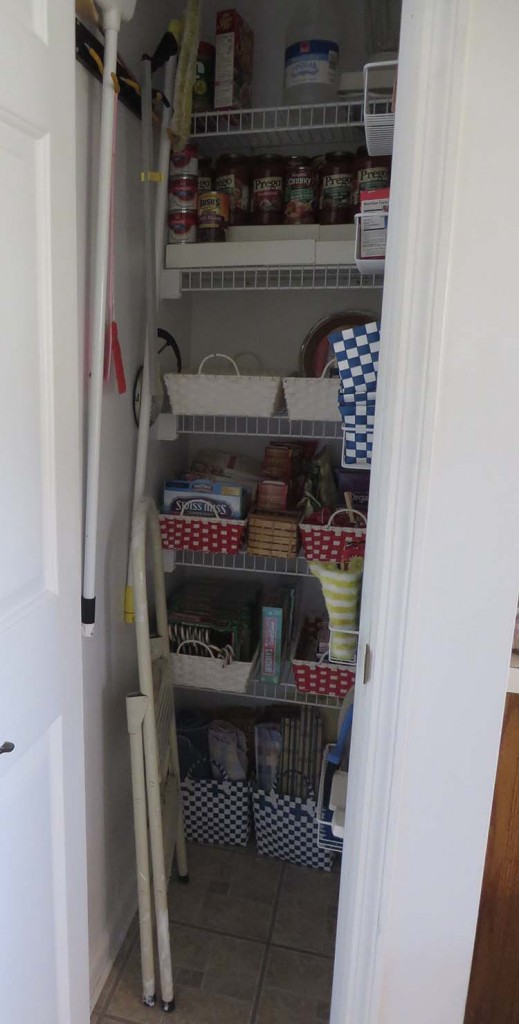