Sinus Surgery: What to Expect 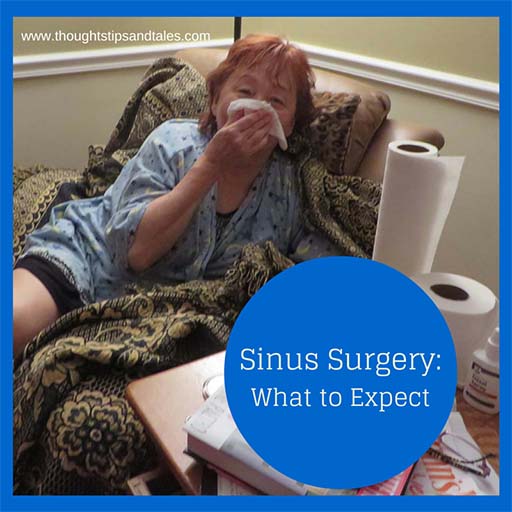 Never even knew what sinus problems were when I lived up North, but after moving to beautiful South Carolina, chronic sinus infections have plagued me for more than 20 years. (Yikes!!!)

Got tested for allergies about a year and a half ago and found out I was allergic to just about everything (including dogs, cats and cockroaches!) Started getting weekly allergy shots that helped to reduce everyday sinus-type headaches, but the infections got more and more frequent.

After suffering seven sinus infections last year, five the year before, and one looonnnggg infection from early December through early March this year — my doctors and I decided it was time to take further action. (“Please do something to make my face stop hurting! Anything!”)

Saw two different ear, nose and throat (ENT) docs and asked  lots of questions, did some Internet research and looked up the procedure online. Also asked around and found a couple people at work who’d had the surgery done — and talked with them.

Then had it done on an outpatient basis.

Both docs made a big point of saying that the surgery wasn’t going to prevent all future sinus infections — but that it would (hopefully) reduce the number of them by allowing the sinuses to drain better.

They told me the procedure’s come a long way, and that I wouldn’t have bruises,  black eyes, facial swelling or packing in my nose. That sounded good!

They did warn me, however, to expect a lot of facial pain right after the surgery and to feel like I had a sinus infection for 2-3 weeks afterwards.

On the big day, had to follow the nothing-to-eat-after-midnight procedure and got there nice and hungry for the afternoon surgery.

They put in an IV, then administered general anesthesia to do the two-hour procedure.

The doc did the entire surgery endoscopically by sticking instruments up my nose and watching a real-time x-ray-like image.

He straightened my deviated septum (twisted nose bone), widened and scraped the sinus openings and sewed one of  the turbinates (curved bone shelves inside your nose that stick out in the breathing passage to clean and humidify air) to the septum.

Came out of anesthesia about 45 minutes after the surgery ended and my face felt numb, but nothing hurt.

My nose was bleeding, though. The last incident I remember involving bloody noses was  seeing a classmate get one in the second grade…

The nurses had me wear a goofy-looking device called a nasal drip tad. It’s a plastic band that goes across your face under your nose and hooks around both ears with elastic loops. You put a rolled up piece of gauze under the section right under your nose, and the device holds the gauze in place and serves as a “drip pan” for blood. (It looks like you have a big white mustache.)

Although it worked great, the nose bleeding was icky and wearing the face thing was  very embarrassing!

The medical staff gave my friend J and me a lot of instructions and a bag of pills (prednisone to reduce internal swelling, antibiotics, anti-nausea med in case the anesthesia caused upset, pain pills). They said to expect nasal stuffiness for several weeks, too. 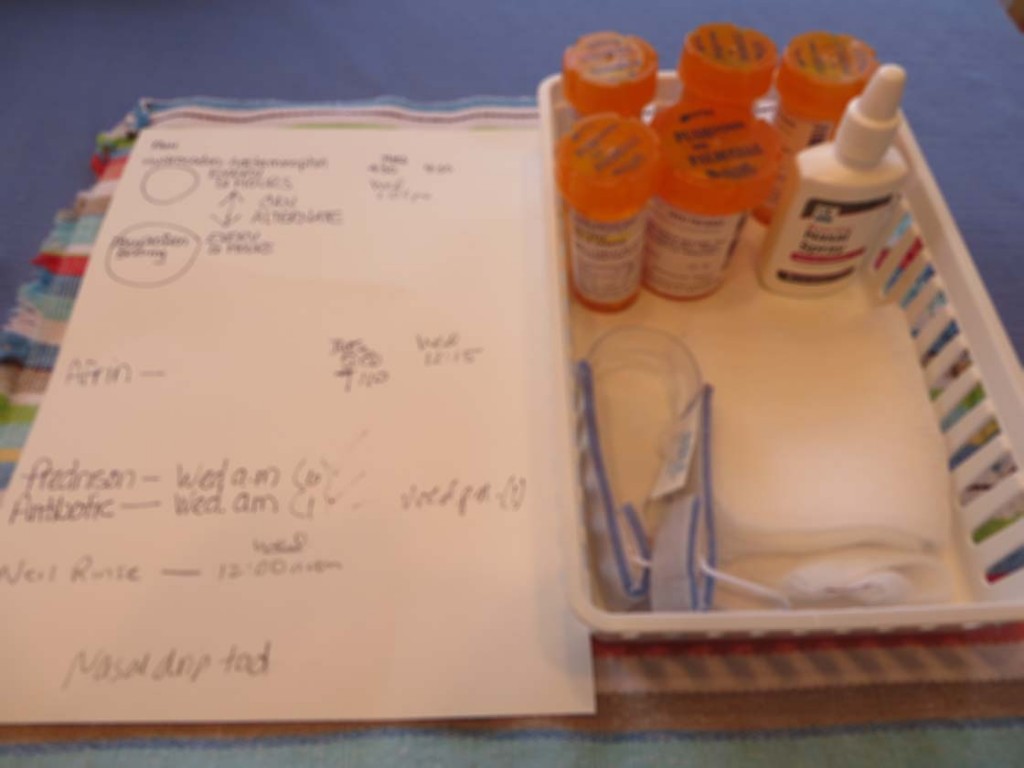 Nurse J took me to her house to recover. She knows all about my addiction to fountain drinks and chocolate, so we stopped at the Wendy’s drive-through on the way and got a chocolate frosty and a Diet Coke — a great post-surgery treat!

We hung out, then she and her husband grilled hamburgers on the grill. I ate with gusto, then we hung out some more.

Took  two hydrocodone pain pills (six hours apart) after the surgery, but can’t believe that I wasn’t even sleepy and had no pain. All I felt was my face and teeth gradually un-numbing from the anesthesia.

I slept that night sitting up in her recliner chair since my nose was still bleeding and I didn’t want to mess up her sheets and/or choke! That wasn’t the best night’s sleep ever… but it worked fine.

(It’s a good idea to avoid leaning forward for things — to avoid nosebleeds — and  try to lift straight up and down using your leg muscles instead.)

The next day, I felt a little stuffy but still had no pain! Went home and took pain pills the rest of the day since I wasn’t driving anywhere, but was absolutely fine. Wore the “drip tad” half the day, then finally whipped it off and resorted to holding a paper towel under my nose, although the bleeding had mostly stopped.

The third day, my cheeks hurt some for half a day, but nothing near as bad as they do during a sinus infection.  They also hurt some on subsequent days, but not enough to justify taking pain pills.

I went for a long walk in the neighborhood the third day after surgery and considered myself pretty much “back to normal” by the fourth day.

(My cheeks hurt for a few days after that, though.)

After the surgery, in addition to taking prescribed pills, the only other thing you need to do — medicine-wise — is spray prescription medicine (mixed with distilled water in a Neil Rinse bottle) up your nose twice a day and use saline rinse three-to-five times daily.

In addition, you need to avoid lifting heavy things and refrain from doing vigorous exercise for two weeks. (My doc said I should walk instead of doing the usual Body Pump and Zumba.)

Maybe I was really lucky, but the surgery wasn’t bad at all! If it reduces the number of  sinus infections, it’ll be well worth it.

29 Responses to Sinus Surgery: What to Expect