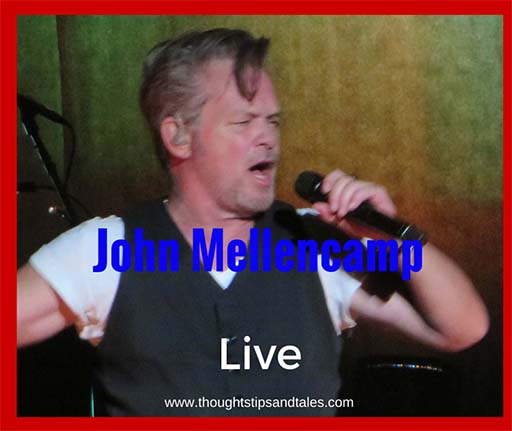 Tonight was one of the best nights in recent memory: got to see John Mellencamp (formerly John Cougar Mellencamp) — one of my all-time favorite singers — live in concert. My friend from work had free tickets — and our seats were center stage, about 20 rows back.

Man, that guy can sing. And all kinds of music — not just Small Town, Jack and Diane, I Need a  Lover, Crumblin’ Down, R.O.C.K. in the USA and Hurt So Good (which he really disappointed me by not singing, since it’s probably my third favorite song ever)… but he belted out jazz, hard rock, ballads and a little bit of everything.

John played guitar and sang song after song for almost two hours, with a great six-piece band that featured a violinist and accordion player. (Haven’t seen an accordion since my fifth-grade boyfriend revealed that he took lessons.)

He started off wearing a black suit and ended up rockin’ in a white tee shirt and vest. (And no matter how old we get, he’ll always be a hunk to me…)

Everyone was sweaty and smiling when we left — a sure sign of a good time.