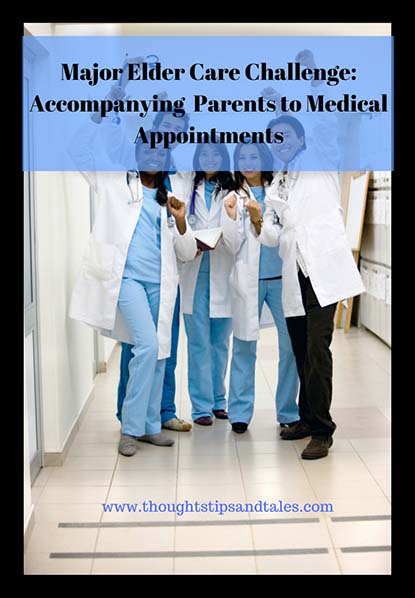 I am so blessed to have two parents in their nineties who live in an independent living retirement community nearby (with a lot of help from me).  My biggest elder care challenge — as a single person with a demanding full-time job– is accompanying my profoundly hearing-impaired parents to medical visits.

When I moved them to be closer to me a little over six months ago, I had no idea what was ahead. It’s like becoming a first-time parent: you’ve never done it before and you make it up as you go, doing the best you can.

Because they stopped driving and got rid of their car when they moved from their condo, I knew I’d be checking in on them often and running errands for them. The resident community provides meals and transportation, including weekly visits to church, banks, Walmart and the grocery store, as well as transportation to medical visits – so I didn’t think too much about that aspect of things.

What I failed to consider regarding medical visits was the fact that both my parents are severely hearing-impaired. They can’t simply have a van drive them to medical appointments and pick them up.

My mom has had a major hearing loss for  many years – and although she got a cochlear implant in her late 80, it doesn’t work well. Hearing loss came on suddenly at about age 89 for my dad and his hearing declined dramatically after that. With two hearing aids in place – the audiologist says he hears only about 40 percent of words. He refused to wear the second hearing aid (and eventually lost it), so the percentage of words he hears must be way below 40 percent with a single aid.

Neither parent knows sign language, and they can’t lip-read very well because schools didn’t teach phonetics when they were children.

They both have bad memories and a little dementia, too.

On their best days when they were younger, they were typical Greatest Generation people who went to the doctor, respected his position and authority and didn’t ask questions.

When I’d ask them the outcome of visits, they’d just say either, “I’m fine” or “I don’t remember.” I could ask all the questions in the world after that, but they had nothing else to report.

And they would never consider taking notes about anything the doctor said.

I, on the other hand, visit all my doctors annually, semi-annually or as required, come with a list of questions in hand to maximize the time we have, and write everything the doctor says for a permanent record. Then I follow up as directed. What can I say? Different generation.

My biggest challenge is frequently having to leave work to drive my parents to numerous doctor visits that always take place during the work day,  plus filling out 5-page new-patient forms for both of them at many visits, bringing a list of questions to ask and symptoms to present, and taking notes on what the doctor says. The most critical part, though, is acting as a translator.

Mom and dad’s primary doctors are very good with them – sitting directly across from them, making eye contact, and speaking loudly and slowly. But my parents still don’t hear everything.

Their other doctors/dentists and their staff members, despite my repeated warnings that both are very, very hearing-impaired and my request that they speak loudly and slowly, talk to them in a normal voice at a fast pace.

I always end up sitting between the medical professional and my parent acting as a translator. If the doctor says, “Do you have pain?” I can look at my parent’s face and see he or she didn’t hear that. So I repeat in an elevated volume several times and several ways, “Pain? Does it hurt?” Then the light bulb comes on and my parent answers the doctor’s question.

The whole visit is one giant translation session between the two parties, with follow-up explanation after we leave the office for the things the doctor said that my parents didn’t hear.

All our doctor visits to date – the typical ones you set up when you move (doctor, dentist, audiologist, eye doctor, etc.) – and those for more serious complaints – have gone well.
I run to the drugstore afterwards to pick up prescriptions or supplies we need, and everyone stays pretty healthy.

My mother has been in the hospital three times during the six months she’s lived here, however – and that was even tougher than a typical doctor visit because numerous nurses, aides, doctors, technicians and others constantly tried to get information from her or convey info to her.

That required “hearing and understanding” translation day and night over a period of weeks.

As you can guess, all these doctor visits for them – and my own medical appointments, too – take a tremendous amount of time away from my job. I’m extremely grateful to work for a large organization that gives us adequate sick leave (which you can use for family members), and lets us work flex-time and telework occasionally.  And my boss is extremely understanding.

For months I tried to make up the time off work each time I took them to a medical appointment, and ended up working til 11 p.m. at my kitchen table for days in a row or on weekends, which impacted my health. And I could never make up enough time to stay ahead of the sick  leave we had to use. (And once you run through sick leave, you have to use vacation time, and after that, your pay gets docked.)

So – the big question is – what is the solution for this, so my parents are well-cared-for and my health isn’t compromised?

Friends have suggested hiring home health aides through an agency to accompany my parents to the doctor.

I truly don’t believe that a randomly-assigned aide from any agency would be capable of asking the questions I’d provide for them to ask the doctor, filling out medical forms for my parents, writing down everything the doctor said (to report back to me), and acting as an adequate hearing translator.

The quality of the aides we hired one week after a hospital visit was only adequate – although we did luck out with an excellent aide a few of those days. Many of them were young women just out of high school with little life experience or experience with the elderly or the medical community.

In addition to the quality of any potential medical visit caretaker, the cost is another issue. The agency we used has a 4-hour minimum (the other local agencies do, too) – which costs $89 a day to hire an aide to accompany a parent to a medical appointment.

My parents could pay for these visits, but they’re Depression-Era people who hold on to every dime.

When I hired the aides mentioned above, my dad gave me so much grief that it made my life nearly unbearable. And it was all because I “made” him spend money he didn’t think was necessary and I did. A dizzy 91-year-old woman who recently had hip replacement surgery is not a person to be left alone with a 93-year-old caregiver!

So presenting the idea of a paid caretaker accompanying them to doctor visits will NOT go over well. It’ll be a HUGE battle.

My thrifty young-at-heart dad seems to think he’s 30 years old and completely competent to do everything needed, although he refuses to use a cane and lurches precariously to the side each time he stands up — and because his hearing is so diminished, he ignores people when they talk to him because he can’t hear them.

In fact, the other day dad suggested he could take an Uber to a doctor visit and go alone! When I pointed out he didn’t know how to use Uber and it would be dangerous  because he wouldn’t be able to hear the driver or the doctor, he got extremely upset.

So that’s my problem … in a (rather long) nutshell.

Then I can continue to leave work when necessary and take both parents to medical visits (which still occur at least once a week) without having to work til midnight to make up time missed.

However, I’m still looking for alternative solutions. If you have one – please write a comment!