Posted on October 2, 2018 by blogqueendiane 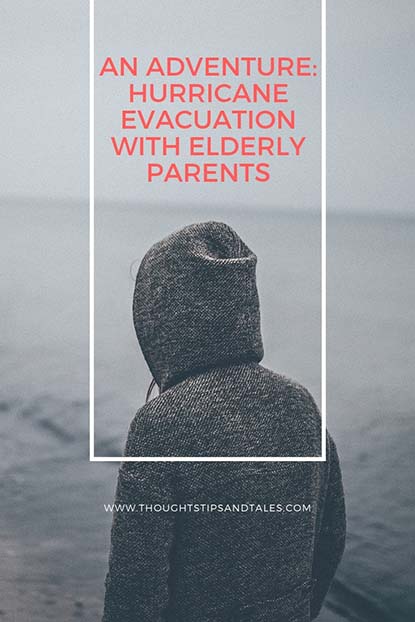 Hurricane Florence was a threat to Charleston, S.C.,  where I live — and where my 91- and 93-year-old parents’ retirement center is — so when the South Carolina governor issued a mandatory evacuation in September 2018, we had to head inland. I lost everything I owned 29 years before in Hurricane Hugo, so I didn’t even consider staying home!

Although I’ve evacuated a number of times over the years with my son on what we called “unplanned vacations,” there were very different challenges evacuating with my elderly parents because:

1) Both are severely hearing impaired
2) Both are mobility impaired (my mom more than my dad)
3) My mom has Alzheimer’s
4) My dad thought it was ridiculous to evacuate (until he realized their place was being closed and the choice was to take a bus and leave with the other residents or go with me!)
5) Both needed help packing — and deciding what to pack
6) Neither had ever evacuated before — despite living in Florida for 25 years
7) I had to telework 8 hours a day while we were evacuated or take all the time as vacation days (which I need to take both parents to doctor appointments!)

Things got started with a couple misadventures…

The night before we planned to leave town, I (and everyone else) had to fill the car with gas, so after work I went to a gas station on the way home that (surprisingly) didn’t have a line of cars. Pulled up to the pump, put in my credit card info and tried to pump gas, but, unfortunately — the pump was empty.

Then when I backed up to try another pump… I bumped into a woman’s car who pulled in behind me and thought I saw her. Fortunately, her car didn’t appear to be damaged — and she was very nice — but she pointed to my car and asked, “Did you always have that dent there?” I didn’t — and now had a big dent just above the tail light. 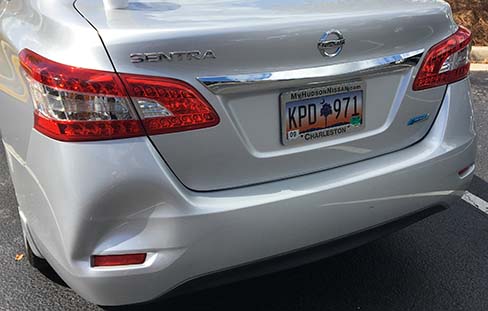 The worse thing was: I’d had an accident in another gas station several weeks prior to that and had just picked up my car from the collision center three days earlier…

I left that gas station and had to go to five others before I could finally fill the tank — and arrived home about 8 p.m. hungry and discouraged.

My parents’ retirement center closed the night before we planned to evacuate, so I’d painstakingly made a list of everything to pack a few days before that and brought suitcases to them.

When I arrived to pick them up, they’d not only lost the list I made, but had only packed a few things. In my mind, the most important items to pack were their medicines (luckily, they don’t take many), medical equipment and toiletries, and enough clothes for four or five days.

Once we got everything packed, they came to my house to spend the night. Because the bedrooms are upstairs (and I didn’t want them to go up and down the staircase), they slept on a pull-out sofa bed and used the half-bath on the first floor.

The morning of the evacuation, my mom showed me her thumb — and said she was in great pain. It’s a long story what happened, but the bottom line was I didn’t think we should leave town until a medical professional examined her since some of the skin on her thumb looked black. We ended up going to the hospital emergency room…

That actually worked out better than expected, because everyone else was headed out of town and we were in and out in about an hour! Luckily, Mom didn’t have gangrene like I envisioned — and the doc said to put neosporin on her thumb and wrap it in gauze. 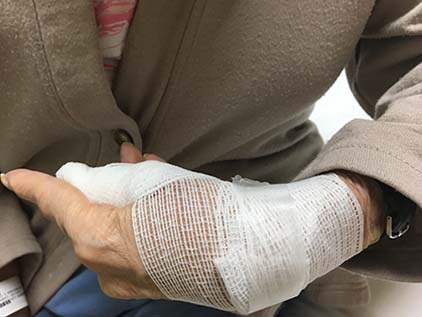 After a quick trip to the grocery store (the drugstore had closed for the hurricane), we got supplies and were able to leave town about 9:30 a.m.

The drive inland went well, since all lanes of traffic on the interstate were headed out of town; the lane reversal really helps to reduce traffic delays in evacuations.

We got to the Holiday Inn Express in Columbia around noon and were allowed to check into the rooms early — also good — and had rooms across the hall from each other. However… we were astounded to find that the two-room suites (which was all they had left by the time I made reservations – and I was lucky to get them after calling 6 hotels) had an 8- to 10-inch drop-off in them, separately the sleeping area from the living room. It looked like a split-level house from the 70s. (The rooms also had a huge hot tub in the living room, which seemed kind of odd to me.) 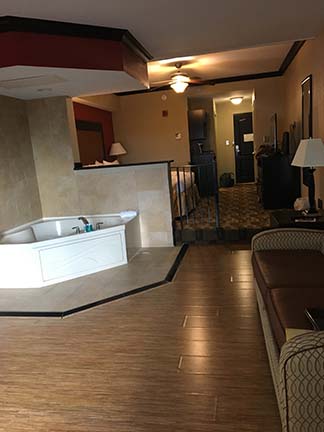 The drop-off was definitely not safe for occupants over 90!

When I called the front desk to see if we could switch rooms, the clerk said every room in the hotel had the same layout except for handicap-accessible rooms; fortunately, someone had cancelled and they had one available on the first floor.

We moved all our things to the new rooms — which was much easier than moving to a new hotel.

Unfortunately, the closest I could get to them was a room on the 2nd floor, which was an issue because neither parent can hear well on a regular phone. (They use a captioned phone at home.) 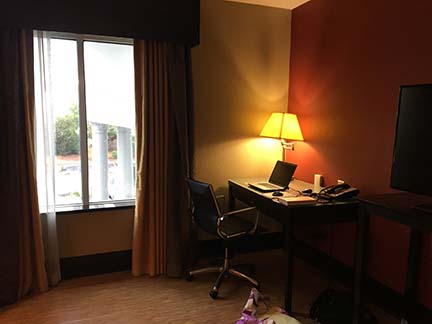 I kept an eye on the weather channel all day, too, because this hurricane was so unpredictable. 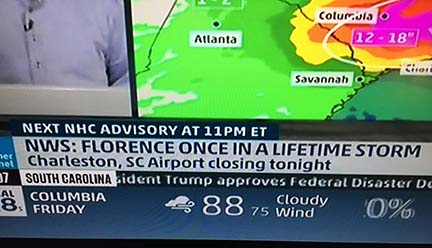 We went out to dinner at area restaurants several nights until the weather got bad, and then I made runs to the Waffle House across the parking lot from our hotel. 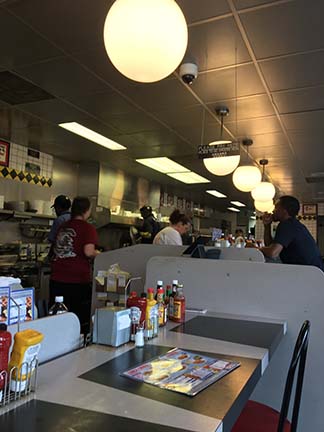 We also snacked on the bags of bread and peanut butter, crackers, granola bars, etc. that I’d brought in case the power went out.

We had one other incident, though. After two days at the hotel, mom asked me if I knew where her purse was — because she wanted to put on lipstick from it. The last place I remembered seeing it was their apartment, and at that point, all we could do was wait til we got home to see if it was there.

In the meantime, we went to Walmart,  got her new lipstick, and she was happy.

A day or two later, someone called me from the hotel front desk and wanted me to come down for “something about my parents.” I nearly freaked out thinking something terrible had happened to them — and they assured me it hadn’t. When I got to the front desk, the clerk showed me a blue purse and asked me if it was my mother’s. It was! Apparently we’d left it in the original hotel room when we moved to the new room.

I was blown away by their kindness in returning it intact with money and identification — and in taking the trouble to track us down, since the rooms were in my name and they had no record of my parents’ names! That was a real blessing.

When you evacuate, sometimes the weather in the city you flee to is as bad as, or worse, than where you came from. In this case, Columbia had rain and breezy weather for several days and many nearby restaurants and stores closed there for the hurricane. 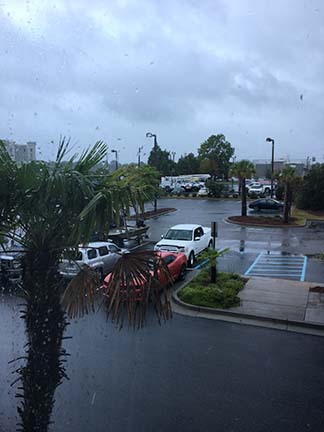 When we returned home five days later, it rained all the way home — and the sun came out half an hour from Charleston. Everyone at home told me it had hardly rained.

My house was intact and my parents’ community was, too — but it still hadn’t opened when we got home Sunday morning, so they stayed overnight at my house one last night, and I took them home the following day after I got home from work.

Evacuating with elderly parents was definitely an adventure…and it took me several weeks to recover from it!

4 Responses to An Adventure: Hurricane Evacuation with Elderly Parents