Buy Unassembled Furniture and Pay Someone to Assemble the Furniture via Handy.com 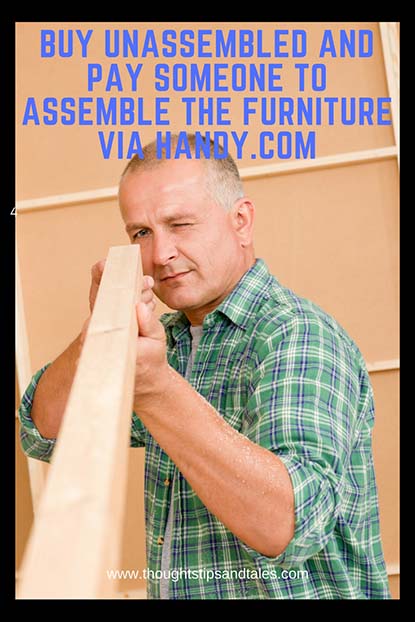 Several months ago, my parents needed a new dresser in their apartment in the retirement community where they live. They didn’t want to pay big bucks – but I didn’t want them to use a raggedy dresser from a thrift store– and we found the perfect solution. I bought them a high quality wood dresser on the Wayfair web site for about $300, and was able to pay someone to assemble the furniture.

Wayfair offers a service where they’ll arrange to have your furniture assembled for a reasonable fee via a website called Handy.com that connects local home services pros with people who need work done. Handy prescreens workers, too, checking their credentials and running a background check.

One of the best things about Handy is the person comes at the exact time you pick — unlike cable company people who show up within a four-hour time range, forcing you to hang around waiting for hours.

I checked to make sure that Handy employed people in the area where we live and ordered the dresser and the assembly, too. (The assembly fee was about $67.)

I made arrangements for the assembly through the Handy website and was relieved that the person could do the work on a week night after 6 p.m., which I needed since I work full-time. That was a big plus!

He called in advance on the scheduled day and confirmed the appointment, and showed up promptly at the designated time.

In the meantime the very heavy package with the dresser parts from Wayfair arrived and a maintenance man hauled it to my parents’ apartment.

In a little over an hour, the furniture assembly man had the dresser finished — and it worked great! The drawers pulled in and out smoothly and the item looked like it’d been bought at a good furniture store. 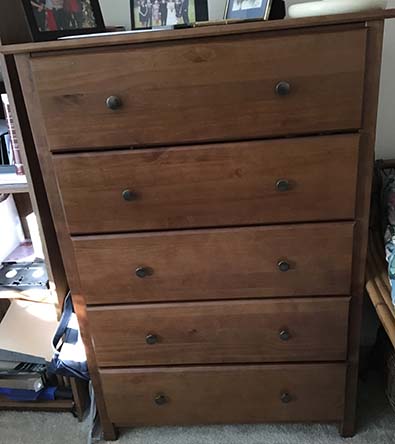 I was totally impressed with the whole experience!

The only fear I had up front was that the assembly man — who was a total stranger — would somehow turn out to be a raving maniac who’d try to kill us… so I went to my parents’ house during the assembly figuring it’d be harder to murder three people than two. And nothing bad happened at all… 🙂

I’d recommend this service to anyone, and I’ll use it again in the future.

Right after our experience, I read that Walmart is starting to use Handy.com, too, to find pros to help shoppers do things like mount a TV on a wall or assemble a bookcase.

Check Handy.com out if you’re not handy yourself!

2 Responses to Buy Unassembled Furniture and Pay Someone to Assemble the Furniture via Handy.com