Highs and Lows of April 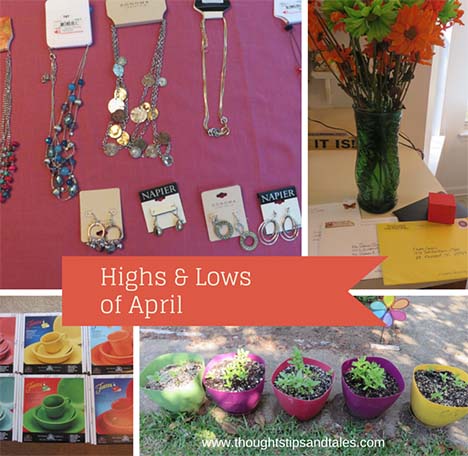 1) Made a reservation for a cruise to Venice and the Greek Islands this summer with a fun friend. Can’t wait — we’ll have a blast!

2) Had a birthday. Every year, I set up any cards or gifts in a little birthday “shrine” on the kitchen counter. When the big day comes, I open everything (usually before work that morning) and keep the cards displayed for a week.  Am really a birthday person! And even though everyone uses email now, it’s still nice to get cards by snail mail.

3) Got some birthday money, so I spent it on about 10 pieces of fun jewelry (earrings and necklaces) from Kohls. They have the nicest jewelry and the best sales!  (Saved more than $150 and got $20 in spendable Kohls cash!) Am also a jewelry person.

4) Attended and enjoyed a very unique and entertaining event: a Tiny Tim birthday party at the library.

5) Discovered two fun new book series: the Janet Evanovich books featuring bounty hunger Stephanie Plum (see a review of the first book; have read three so far and plan to read the rest!) and Sue Grafton books. They’re both quick reads and very enjoyable. The Grafton books are titled with a letter of the alphabet, like “A is for Alibi” and feature private investigator Kinsey Millhone. (Note: this series has been around a few years  — Kinsey still talks on pay phones! )

The Evanovich books have numbers in the titles, starting with One for the Money.

6) Got some pretty plants for the window boxes and planted a bunch of seeds and bulbs in the flower beds near the front porch and some pots nearby. Nothing like a beautiful sunny day and the feel of warm earth on your hands.

7) Had one fun lunch with “the girls” early in the month and a second fun dinner with another set of “the girls” during April. Nothing like nice women friends, laughter and good conversation!

1) A young military member wrecked into my (less-than-a-year-old) car leaving work at the beginning of the month. That car-on-car crunching sound is always a bad thing to hear… But I got estimates, he paid me for it, and it was repaired in the most hassle-free way possible. So, all in all, it wasn’t too bad. (And it could’ve been a lot worse!)

2) Had my second-ever migraine headache — yowie. Discovered that wearing one of those cold packs wrapped around your forehead isn’t a glamorous look.

So how was your month?

5 Responses to Highs and Lows of April