A Tribute to My Amazing Dad

Posted on January 14, 2020 by blogqueendiane 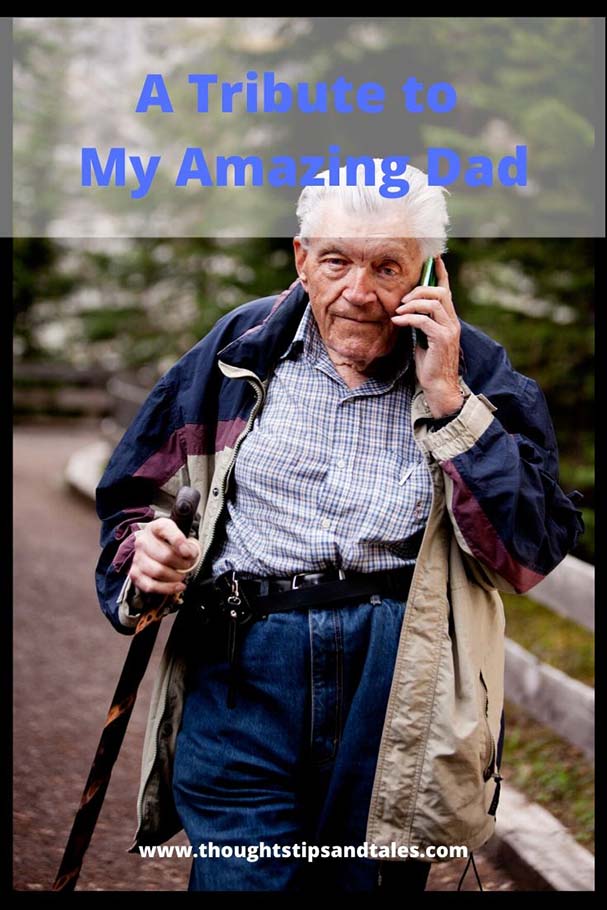 I’ve always been a daddy’s girl and I’ll admit it. (Maybe every girl is.)

My dear dad passed away in November at age 94, and this “tribute to my amazing dad” was the eulogy I gave at his celebration of life.

My dad was born on and grew up on a small farm in Indiana. His mother was widowed when he was fairly young and he and his brother worked on the farm growing up. In high school he played a lot of basketball – because that’s what they do in Indiana.

He went to Purdue University – about 70 miles away – and hitchhiked home on the weekends to help on the farm.

Then he married my mom after they both graduated college and moved to West Virginia for his first – and only – professional job as a chemical engineer at a steel company. He worked there 40 years til he retired.

Dad finished a master’s degree in chemical engineering at The University of Pittsburgh – which was about an hour away – at nights when my sister and I were young.

My family had the most stable, drama-free life you could imagine!

Our town was a small, safe burg where bad things didn’t happen.

And my parents were wonderful – like the Cleavers on Leave it to Beaver!

They were both interested in what we were doing, participative parents, and told us we could do anything we tried. They were real confidence builders!

Some of my earliest memories of my dad were:

Because he was a chemical engineer, he also taught us about “surface tension” by demonstrating on with Ovaltine powder and milk.

Dad was a determined fix-it man – and it seemed like there was nothing he couldn’t fix (although he sometimes broke something else in the course of fixing the original thing).

I remember going shopping with my mom and sister one Saturday and he was under the kitchen sink working on a plumbing problem. When we got back hours later, he was still there!

Another time we came home from somewhere on Saturday, dad brought us proudly into the bathroom and showed us new wallpaper he’d put up.

It was great until my sister asked, “Daddy, why are the fish on the wall swimming upside down?”

Since we went on long family vacations by car every year, he rigged up a wooden bench to put on the floor in the back seat so we can lie down. (That was way before seat belts.)

My dad was the ultimate gentleman and Christian, too.

He attended church every Sunday and NEVER ever cussed (until he was 92!)

Every Sunday night, he’d write a letter to his mom on the farm! And when we went there on vacation, he did things for her like building a fence.

He did kind things for everyone around him. I remember him mowing the front and back yards of the woman next door during my entire childhood!

And he always saw the bright side of everything and never spoke a bad word about anyone that I remember.

When I got married, he’d come to visit a couple times a year and always wanted me to make a “to do” list of chores he could help with.

He’s painted every room in my house a couple times! He put up a huge basketball hoop on a pole when my son was young, too (although there was a fairly large hole in my new garage door when he was done!).

When I broke my right foot and he was about 82, he came up and drove me to work every day for a month.

When he was about 88, he raked 10 bags of leaves in my back yard in one day while visiting!

On a trip to my house when he was 89, he was pumping air in my bike tires in the garage when I was at work, and decided to take the bike for a spin because he rode a bike at home.

Unfortunately, this was a boy’s bike and he couldn’t get his leg over the middle bar.

He fell in the garage – and somehow dragged himself to my front porch, where my friend – who was visiting her son next door – called me at work to come home.

He’d broken his hip and had to go to rehab for two weeks after surgery, but in true style, though, he told the therapist who asked what his goal was and taped it to a sign on the wall – his goal was to get back to Florida, where they lived full-time then – and get back on the golf course.

And he made an amazing recovery.

I remember driving them home and his walking over to plop in his easy chair as soon as he entered the condo.

And less than 9 months later, he was back on the golf course! (Although he said his game was never quite as good – and quit golfing at age 91.)

I sent the surgeon a letter about that, because he’d told the surgeon that was his goal, too!

My dad was a wonderful husband, as well as dad.

My mom – who is a feisty, determined woman to this day – has a paralyzed left arm from birth – and he was always there to do little things like hook her clothes, help her put a jacket on, cut meat for her, and make sure she had everything she needed.

He continued that til his last day, when they lived in independent living and mom was using a manual wheelchair at the time.

He only weighed 124 lbs., and it took all his strength, but he pushed her in the wheelchair to meals every night.

And everyone I met here at the retirement community commented on what a kind and nice dad my dad was, and how he took such good care of my mom!

-They weren’t “mushy” but I’d catch him walking by her and tenderly patting her shoulder — and t hey celebrated 70 years of marriage in October of this year. The pictures we took of them that day are some of my most cherished keepsakes.

My dad had a cute Bob Newhart-like sense of humor, and he was always computer savvy, too, trying to keep up with technology.

In fact, he taught a “young” couple who they were friends with back in West Virginia how to use a computer and how to send emails – and gave them his old computer to use.

In his last years, my dad was very interested in global warming. And he seriously wanted to help find a way to “save the world.”

He researched and read about all kinds of alternate technologies to avoid burning coal, he wrote an editorial to the local newspaper about the need to make changes for climate control. He also contacted professors whose technology he read about and encouraged them in their work this past year.

My dad would often sit quietly for hours, staring and thinking. Once I asked him what he was thinking about when he sat there a long time, and he said, “Climate change.”

I was blown away!

Earlier this year he told me a regret in life – that he wanted to contact so many people to work on climate solutions, but he was just getting too tired to do that.

My dad might not’ve saved the world – as he wanted to – but he meant the world to the people who loved him.

6 Responses to A Tribute to My Amazing Dad