Posted on September 17, 2019 by blogqueendiane 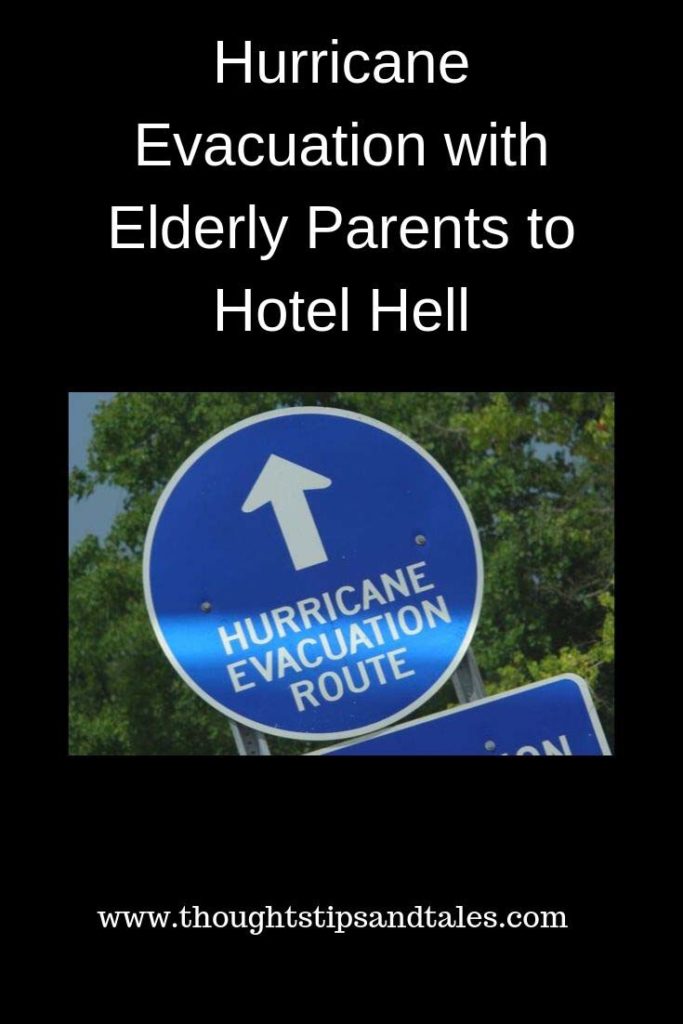 During September 2019, monster Hurricane Dorian devastated the Bahamas and took a path up the East Coast, threatening the Charleston, South Carolina, area where I live and where my 92- and 94-year-old parents live in an independent living community. Little did I know it would result in a hurricane evacuation with elderly parents to Hotel Hell…

Most senior communities are required to move residents to safer places during mandatory evacuations, and  we could have chosen for my parents to be driven four hours across the state to a hotel with other residents, but that would’ve never worked for the following reasons:

1) Both are severely hearing impaired
2) Both are mobility impaired
3) My mom has Alzheimer’s
4) Since it’s independent living, no assistance was provided

In addition, they both need help packing and unpacking, and they only evacuated once before — last year — despite living in Florida for 25 years.

When the S.C. governor called for a mandatory coastal evacuation Labor Day weekend, I’d already booked a room for longer than I thought we’d need (learned the hard way over the years that once an evacuation occurs, rooms go very fast and it can be nearly impossible to find one!) The hotel wasn’t completely full at the time, but no handicap-accessible rooms were available. (Note to self for next evacuation: a handicap-accessible rooms is a must.)

Helped my parents pack most things the day before we were leaving and planned to get my allergy shot early in the morning and help them finish packing and be on the road to Columbia about 10 a.m.

I packed my suitcase that morning, closed up the house and got into the car.

And the car wouldn’t start. It just made that horrible “dead battery” clicking sound.

After a couple freak-out minutes in the 95-degree heat, I went back inside and called the Nissan Garage and then AAA, which they recommended.

The AAA dispatcher first said, “Gee, I don’t know if any tow trucks are out in your area. An evacuation was ordered, you know.”

She then came back and said a few were open that day and someone would be there in less than two hours.

Luckily, a towing SUV pulled into my driveway in about 50 minutes. He confirmed the problem was a dead battery (although it was only two years old with a three-year guarantee), and said he had one new one in his vehicle. I didn’t know before that that some AAA drivers carried new batteries in their vehicles.

A minute later, he told me it would fit my car! So he installed it in my driveway. (Didn’t realize until later what a blessing the timing was, because if the car hadn’t started anywhere else — especially halfway to Columbia, it would’ve been a LOT worse.) 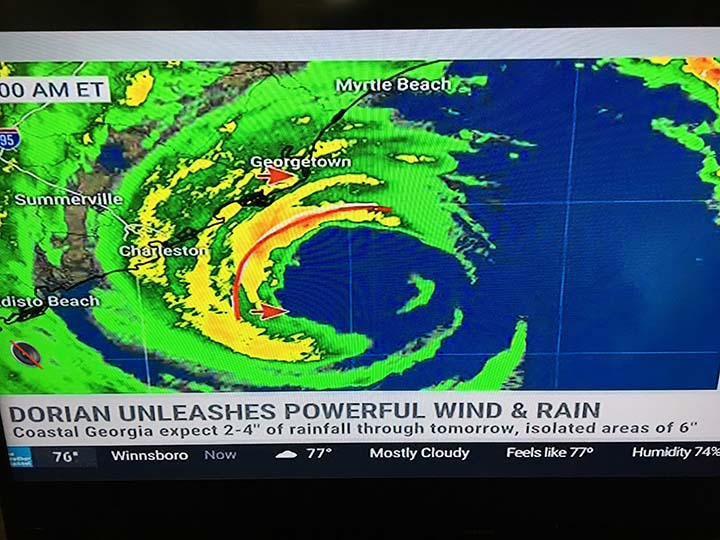 My parents and I were on the road a little before 11 a.m. and  we checked into the hotel. I got my parents settled in their room, watching my dad head immediately for the thermostat to turn the heat on to 80 degrees – the way he likes it,  then went to mine.

I immediately went to the bathroom after the drive, to discover that the toilet was dirty (it had definitely not been “sanitized for my protection”) and there was no toilet paper – either on the roll (not even a cardboard core was left) or under the bathroom cabinet.

And when I flushed the toilet, the toilet OVERFLOWED in a huge, gushing stream of water, pouring out all over the floor.

Ran to the phone and tried to call the front desk and got no dial tone, so I then ran down a floor to the front desk, and yelled to them from down the hall, “Help – my toilet’s overflowing!”

A maintenance man went back upstairs with me, saw the water-covered bathroom and kitchenette floor and went for a plunger. The water was deep and clear up to the metal threshold of the carpeted sleeping area.

He returned, plunged the toilet, and said, “OK – should be fine.” Then he added, “I guess you want me to clean the floor.”

He left to get a mop, and … never returned.

Forty-five minutes later, I went down to the front desk again and he was standing there chatting with other staff members. When he saw me, he said, “Oh! I forgot about you!”

He eventually cleaned the floor (while I sat on the bed and looked out the window; his “plan” didn’t seem sanitary to me but I just wanted him to leave). 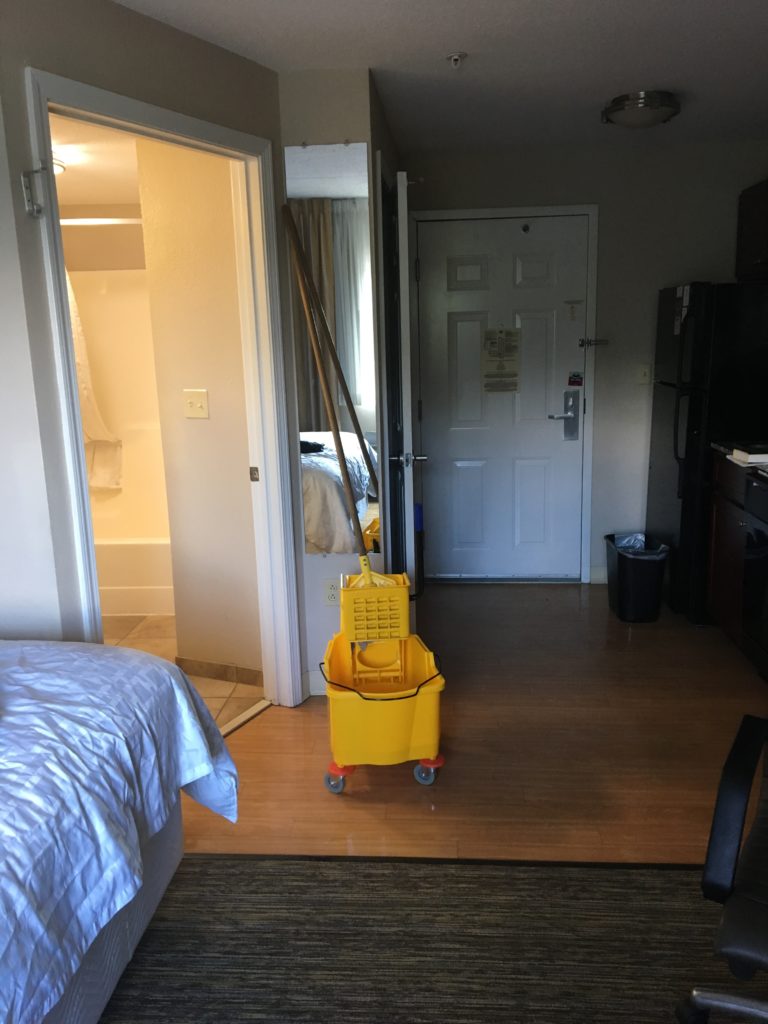 Walked to my parents’ room a few doors away to see how they were doing, and they’d also had a bathroom emergency.

My mom had used the toilet and couldn’t get back up from the seat and was quite disgusted, asking “What kind of hotel is this?” The toilets in both rooms were Munchkin-sized — with seats about 15 inches from the floor. And she’s 92.

Ran back down to the front desk again and begged the woman for a handicapped room. She eventually said they had one, but it was a suite and cost more. I took it.

By then, it was dinnertime and I had to take my parents out to dinner — which we don’t normally do anymore due to limited mobility; they eat in the dining room of their facility.

After that, we got back to the hotel to move them into the handicapped-accessible room. The hotel clerk had earlier promised that someone would help me to move everything, but that didn’t come through. I thought my parents could help pack some things, but they settled in the lobby and said they’d “wait there for me.”

I scurried around the sauna-hot hotel room gathering all the many, many things they’d already taken out of the suitcases and put everywhere, and then carted them all to the new room on the first floor and put them away again. The toilet — equally as low as the ones in the other rooms — had grab bars around it and my parents were happier and safer.

Now they were on the first floor and I was on the second, so before I could leave, I had to set the phone up and test it so they could call me on the next floor.

I knew they wouldn’t hear anything I said because they normally use a captioned phone, but it’s the best we could do.

Discovered it’d be long distance for them to call my cell phone from their room phone, so I tested the room-to-room dialing. And when I called my own room,  got a busy signal. What the heck?

Clearly, I wasn’t there and nobody else should’ve been, either.

Ran back to the front desk again and the woman said, “Oh, yes, it’s probably off the hook.”

So I ran back upstairs, and my phone was completely unplugged from the wall. (If a housekeeper had, indeed, cleaned my room before I arrived, I feel sure the person should’ve noticed the phone was disconnected…)

I plugged that phone into every jack in the room and couldn’t get a dial tone.

So…I ran back downstairs to the front desk again, and another maintenance man was sent back up with me to fix the phone.

He showed me which jack to use, and pressed a button on the phone and said it was working. (How would I have ever known which button to press on the phone?)

Then, he drawled, “I bet you went to college…” with the clear implication that, despite my education, he was smarter than I was because I couldn’t figure out how to get the phone to work.

To add insult to injury, he then said out of the clear blue skies, as we both were forced to ride the elevator back down together, that he’d have to “get me to vote for Trump.”

And he — and a fellow elevator passenger — proceeded to taunt me, after I said calmly, through clenched lips, “I could never do that,” about buying me a MAGA hat, etc.

Believe me when I say they got on my last nerve and it was the world’s slowest elevator ride. I wanted to kick them both.

Re-tested the call to my room, wrote directions for my parents, and finally went to my room. It was 9:09 p.m. and I was totally fried.

Took my shoes and socks off immediately and walked around the side of the bed to sit on it and check the Weather Channel again. 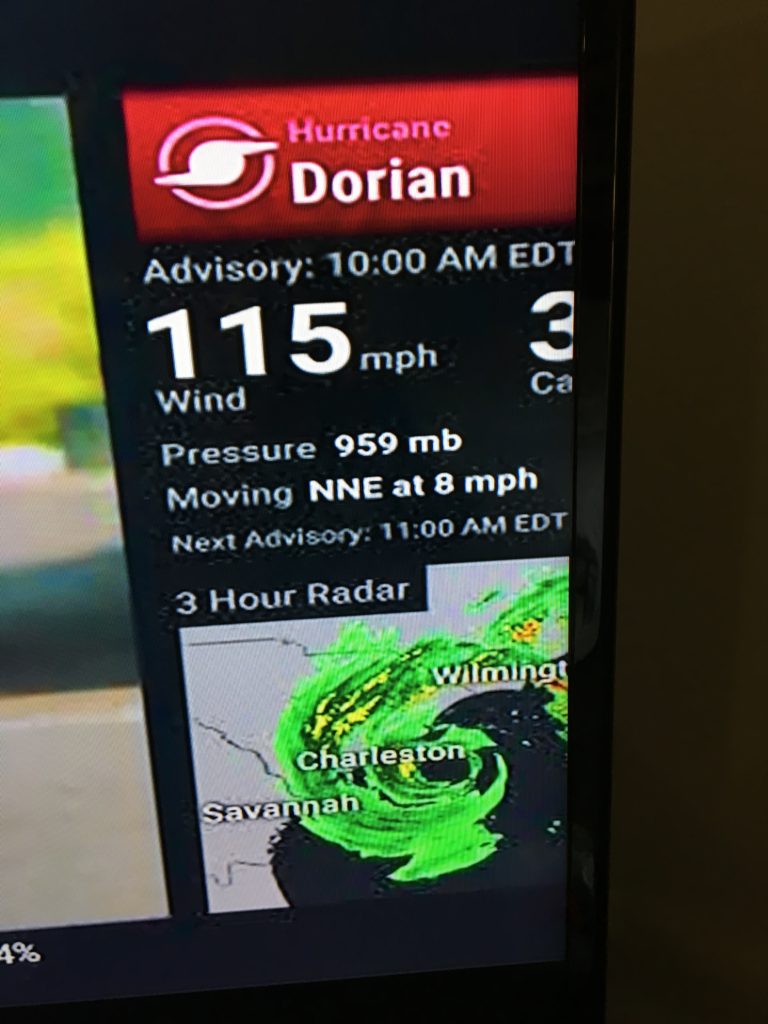 At that point, even after I thought about my sinus problems and how much mold was probably growing on the floor, I gave up and sat on the bed for several hours staring into space, trying to unwind from one of the worse days of my life.

And I fervently hoped someone had changed the sheets because I was too beat to deal with it.

My dad was extremely disoriented and upset when I checked in on them in the morning, and the hotel didn’t have any newspapers, which my parents love to read in the morning, so I had to drive a mile away to get one.

Then, I went back to my room and it took me the entire day — eight hours — to get onto the wifi and into the VPN to the network at work, because I had to either work 8 hours a day via computer during an evacuation or take vacation leave. (And this was no vacation!)

I’d tried for several hours the day before to log into work and asked the front desk clerk for their hotel’s IT phone number but she wouldn’t give it to me, so I gave up.

So the second day I took the laptop to the front desk (because they insisted I do that and obviously thought I didn’t know what I was doing — and, of course, they couldn’t get through either).

She finally gave me the IT number, but when I got to my room, realized she’d failed to write the last digit of it… At least this time my phone worked and I could call the front desk instead of running downstairs.

Had to call two IT people at that number because the first one promised to call me back and after we worked an hour and got disconnected he never did, then the second one promised a higher-level tech rep would call back and he/she didn’t, either. The first rep eventually called me back and said he “forgot” me. That’s why it took all day.

There were other problems, of course, but things gradually got better — or I got used to the situation, and we were able to make it home, alive and well, four days later.

This was definitely an experience I’ll never forgot.

7 Responses to Hurricane Evacuation with Elderly Parents to Hotel Hell