The Sisterhood of Thrift Store Shoppers

Posted on February 20, 2015 by blogqueendiane 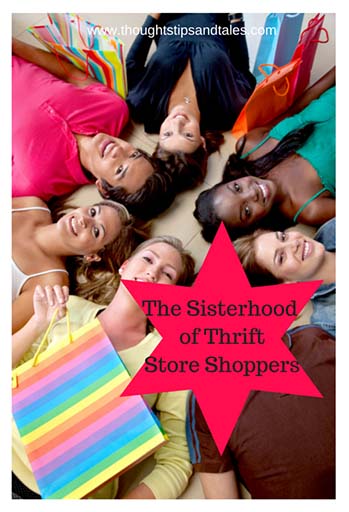 Nearly every Friday after work I swing by the best thrift store in town before going home. It’s only about two miles away.

Tonight’s trip was really fun; everyone in the store wanted to chat.

The first woman was sitting on the windowsill where I was, too (trying on shoes), and she asked if the red sweater in her cart was “too bright.” She held it up to the red print skirt that matched it and I told her I thought she had “a winning outfit.” As I got up to walk away, she wanted another opinion – and motioned that she wanted me and several nearby women to chime in.

She revealed that she’d lost more than 100 lbs. — and the woman behind me whooped and high-fived her, while we all congratulated her. She then pointed to a top she’d slipped over her shirt and asked if it was too tight, mentioning she’d wear it with black tights (instead of the pants she had on underneath). The higher-fiver assured her that was a good look — and added a reminder to “throw on  some Spanx, too, honey.”

I walked away from that conversation with a grin as the others continued talking.

Then I picked up a framed palm tree print and the nearby shopper told me, with a twinkle in her eye, that it would look great in my “beach house.” That made me smile, too.

A third shopper was walking up and down all the aisles talking constantly and looking intently at the sweaters. She was either nuts or talking on a cell phone (and I didn’t stare long enough to figure out which it was).

Finally, she paused next to me, showing me everything in her cart and bemoaning the fact that she couldn’t find tops to match the bottoms, asking me whether the pants she had were blue or black, and what I thought of various combinations. (My response took some tact since we had diametrically differing tastes in clothing.) After we talked, she either hung up or stopped talking to herself since she’d had a “real” conversation.

Several other women spoke to me, too, before I reached the cash register and paid $33 for a pair of shoes, four leather purses, three tops and a pair of shorts — and walked out with bags up my arm.

I’d been in kind of a pre-Valentine’s-Day-and-I’m-single funk when I walked in, but the sisterhood of thrift store shoppers (and my bargain finds) lifted me up and made me feel like everything was going to be just fine.

Things NOT to Sell at a Yard Sale

Thrift Store Treasures: What I Did NOT Buy

Thrift Store Adventures Save Big Bucks and Count as Retail Therapy, Too

8 Responses to The Sisterhood of Thrift Store Shoppers