Bid on Room Upgrades on Norwegian Cruise Line; You Might Win Big

Posted on January 23, 2018 by blogqueendiane 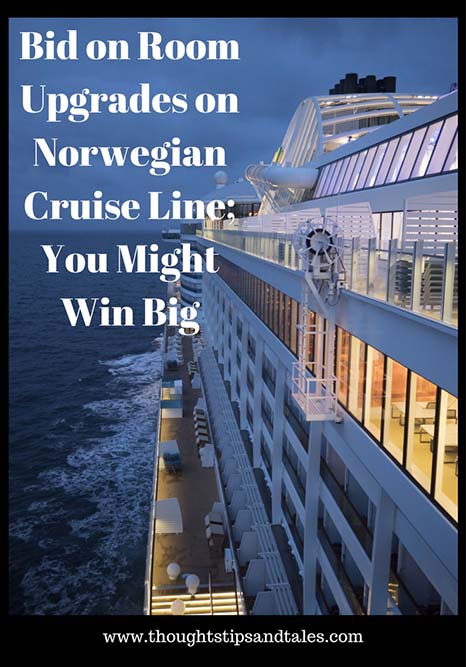 Did you know that passengers can bid on room upgrades on Norwegian cruise line? I got the opportunity to bid for a room upgrade on an upcoming trip and “won” a balcony cabin for a crazy low price.My friend Merry Ellen and I have a fabulous European cruise planned in 2018, and the itinerary is only available on Norwegian Cruise Lines.

The two of us love cruising and have easily done 15 cruises each on four different cruise lines; this, however, will be our first adventure with Norwegian.

To be honest, the Norwegian cruise reservation process was dreadful; our assigned “cruise specialist” was incompetent, and we were told me could only deal with him. (WTH?!)

He didn’t return phone calls, moved our cabin to another deck without our permission, gave us incorrect info, and basically bungled every thing he tried to do.

We’d never had this much trouble before on any other cruise line.

To our “surprise,” late in the reservation process we learned he was “no longer with the company.”

We also tried to book air through the Norwegian travel department and found their terms different from those of every cruise line we’ve traveled before and totally unacceptable (no input into flights, and we had to pay $50 to make changes when they finally gave us the itinerary only 30 days prior to travel if we didn’t like what they booked).  When we called to question it, the reservation person (with a poor attitude and no customer service skills) asked, “Well, do you want to book it yourself?”

About a month after we learned our “personal reservations specialist” was gone, we got a supervisor to move our cabin back to the deck we originally made reservations for.

We also received an email inviting us to “bid” for an upgraded cabin online — something that had never happened with Celebrity, Princess, Holland America or Carnival. (I did a computer search later and found this is a common practice at Norwegian and doesn’t appear to be related to contacting the supervisor.)

Merry Ellen and I save all year for a blow-out cruise adventure, but don’t spend money unnecessarily. Therefore, we usually get an inside cabin — the cheapest one possible — since we’re out on shore excursions nearly every day.

We decided not to bid at all for a ocean view room (who wants a porthole?), but to bid $100 each for a balcony cabin. That amount, according to the online Norwegian “cruise meter,” was considered a “poor” offer. When we entered our amount,  the meter, in fact, barely moved from zero!

Since it didn’t cost us anything to bid, we went with it and sort of laughed it off.

Several weeks later, however, we got emails telling us we’d been upgraded to a balcony room for the amount we bid! We feared that room was deep in the bowels of the ship (where we never want to be), but we were astonished to find the new balcony room is on deck 10 — our preferred location (near the pools and informal dining room).

Norwegian definitely made up for the painful reservation process by rewarding us with this room!

If you sail on Norwegian in the future and receive an offer to bid on an upgrade, by all means take it. If you submit a winning bid, you could move to a much higher level room worth up to $1,000 per person more than you originally paid, like we did.

8 Responses to Bid on Room Upgrades on Norwegian Cruise Line; You Might Win Big