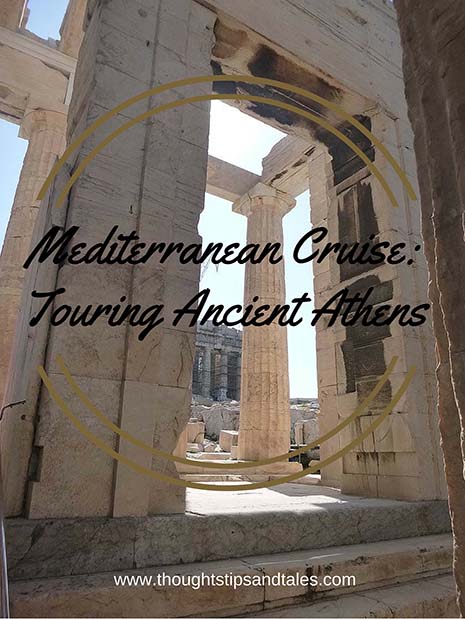 On the fifth day of our Mediterranean cruise, the ship docked in Pireaus, a port about seven miles from Athens. We had 12 hours to spend there and didn’t want to waste a minute! 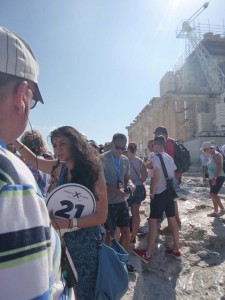 We met our tour guide for the shore excursion early and went by bus to the Acropolis, which is the big hill where several ancient buildings are located — including the Parthenon. From the top, you get a breathtaking view of the surrounding city of Athens — miles of whitewashed buildings with mountains in the background.

We’d heard that the crowds at the Acropolis could be heavy, but when we got in at about 9 a.m., it wasn’t bad at all. The guide got our tickets and we followed her through the gate and up about 200 marble steps to the top of the hill.

From there, we walked on broken marble — a mixture of small chucks and big pieces. (Be sure to wear sturdy shoes if you go!) 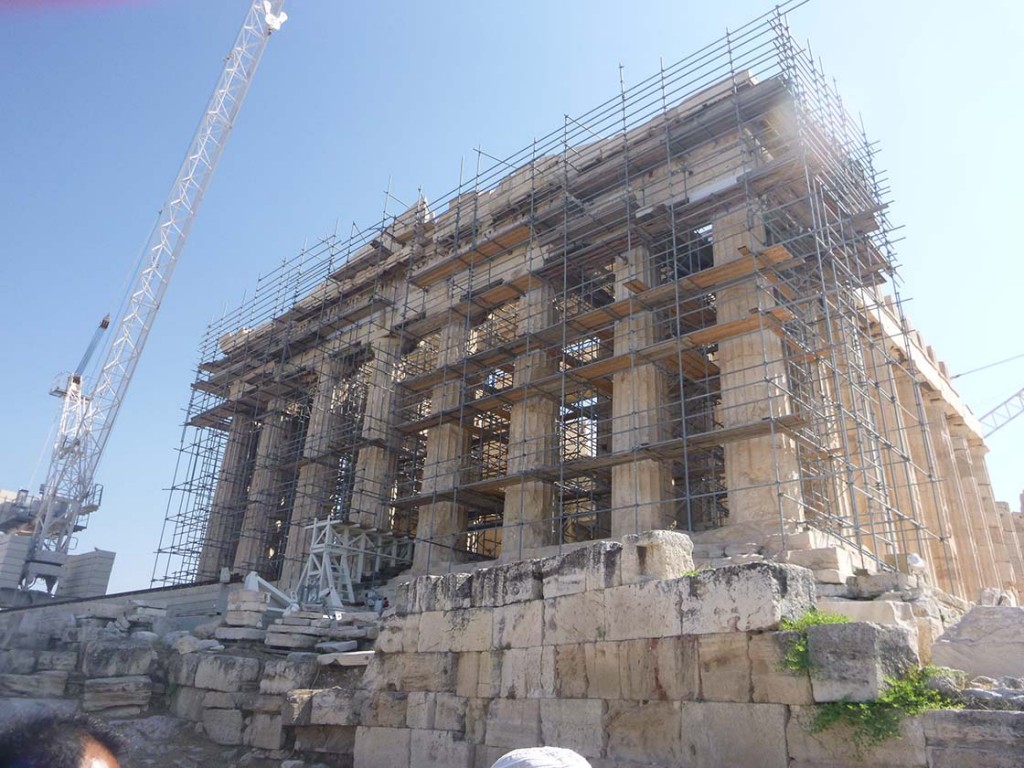 I was surprised to see that the columns across the whole front of the Parthenon were covered with scaffolding, from the bottom to the top. That took away some of the majesty of the structure, but the view from the other sides of the building was very cool. And it was neat to see a historic site that you’ve only seen before in pictures. 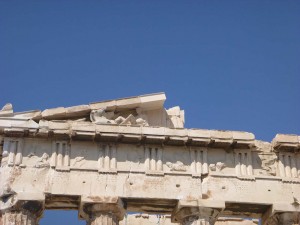 (The Parthenon, a former temple completed in 438 B.C. to honor the goddess Athena, is regarded as a symbol of ancient Greece, democracy and western civilization.) 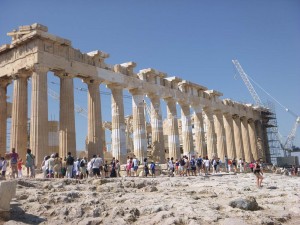 As we walked around the building, taking photos from all angles, we admired the intricate, ornately carved pieces in and on the columns of the building. It was really incredible workmanship — and it’s amazing it’s endured nearly 2,500 years!

Our guide told us that the ruins of the building next to the Parthenon, the Erechtheion (I had to giggle every time someone said that word…), was an even more sacred building than the Parthenon in ancient times. It was built about 420 B.C. , too, to hold the holy relics of the Athenians. 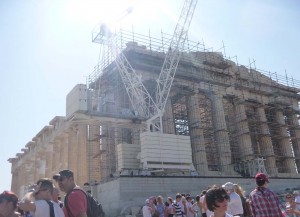 The guide gave us a half an hour to wander on our own and make our way back to a snack stand at the bottom of the hill where we’d meet.

Well…while we were touring, apparently a LOT of other people had come in the gate behind us, because there was a huge, stationary crowd about 30 people wide. We had no idea what was going on, so we went to the left and inadvertently  tried to climb back down the “up” path, until we got cussed at in about five languages. So we joined the throng of people in the scorching sun, who were apparently waiting to go downhill.

Forty-five minutes later as we reached the bottom, we realized the crowd of people was funneling into a path wide enough for a single person at the exit.

Where we came out, there was a drop off of at least two feet; my friend reached out to grab onto a stranger’s shirt until he looked at his quizzically, realized her predicament and reached out his hand to help her get down.

After reviving ourselves with a cold drink, we walked to the nearby Acropolis Museum. 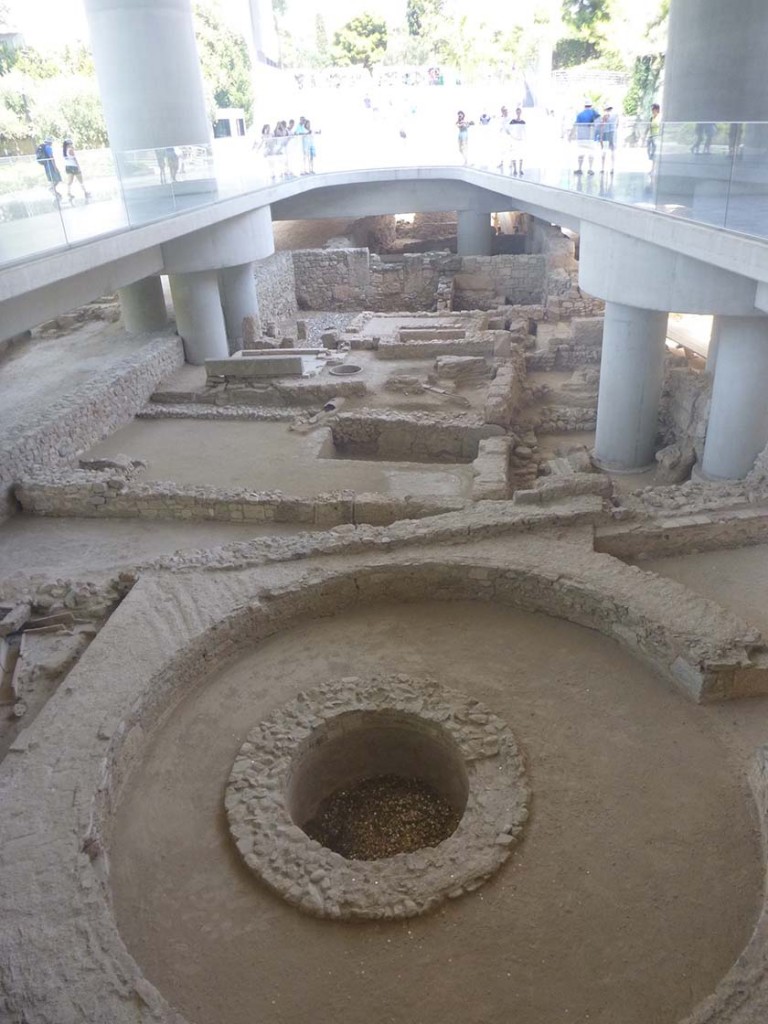 The exhibits start before you reach the door, where huge pieces of glass cover excavations from the Acropolis in the ground below. Inside the museum (blessedly, air conditioned) were lots of busts, statues, bas-reliefs and other remnants of ancient architecture and art related to the Acropolis. The museum was spacious and airy, and very interesting and enjoyable. 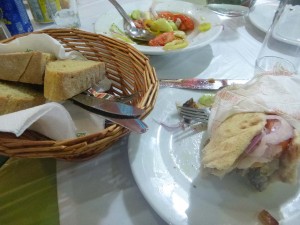 We went by bus through Athens and got out to see a stadium where the ancient Olympics were held. 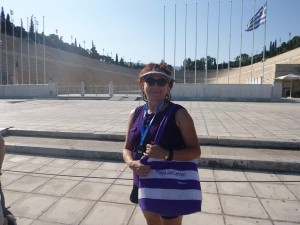 Then we went to a restaurant for lunch, where we ate Greek salad and souvlaki (a shish kebob in a pita shell) while accordion players serenaded us. 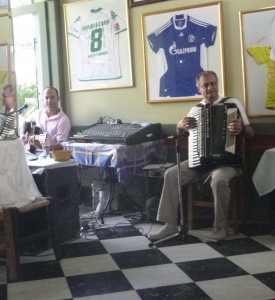 After that, we had several hours to shop in the nearby Plaka neighborhood. We loved the cobblestone streets filled with shop after shop of interesting Greek wares, and we tried to go in as many stores as we could.

At one point, my friend decided to sit in a chair on the sidewalk while I browsed in a couple shops; when I returned, she told me a shopkeeper came up and demanded 20 euros to sit in that chair unless she came into his shop! (That discouraged us from sitting anywhere else the rest of the shopping trip.) 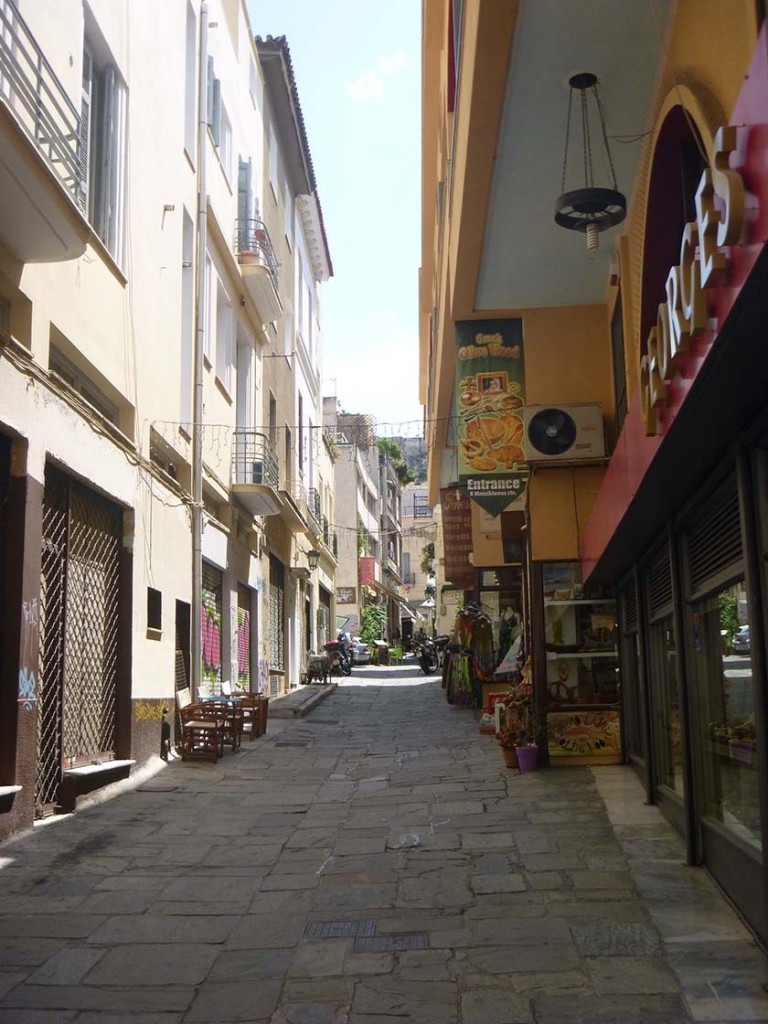 Some of the items in our favorite stores are pictured here. I could’ve shopped there for a week! 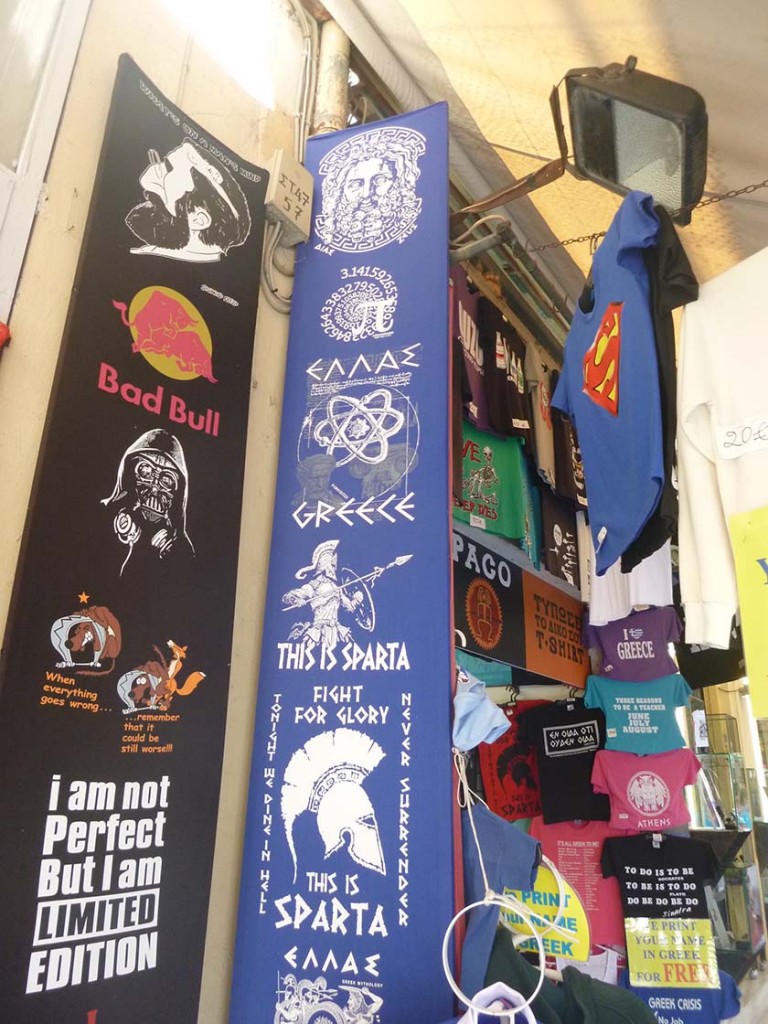 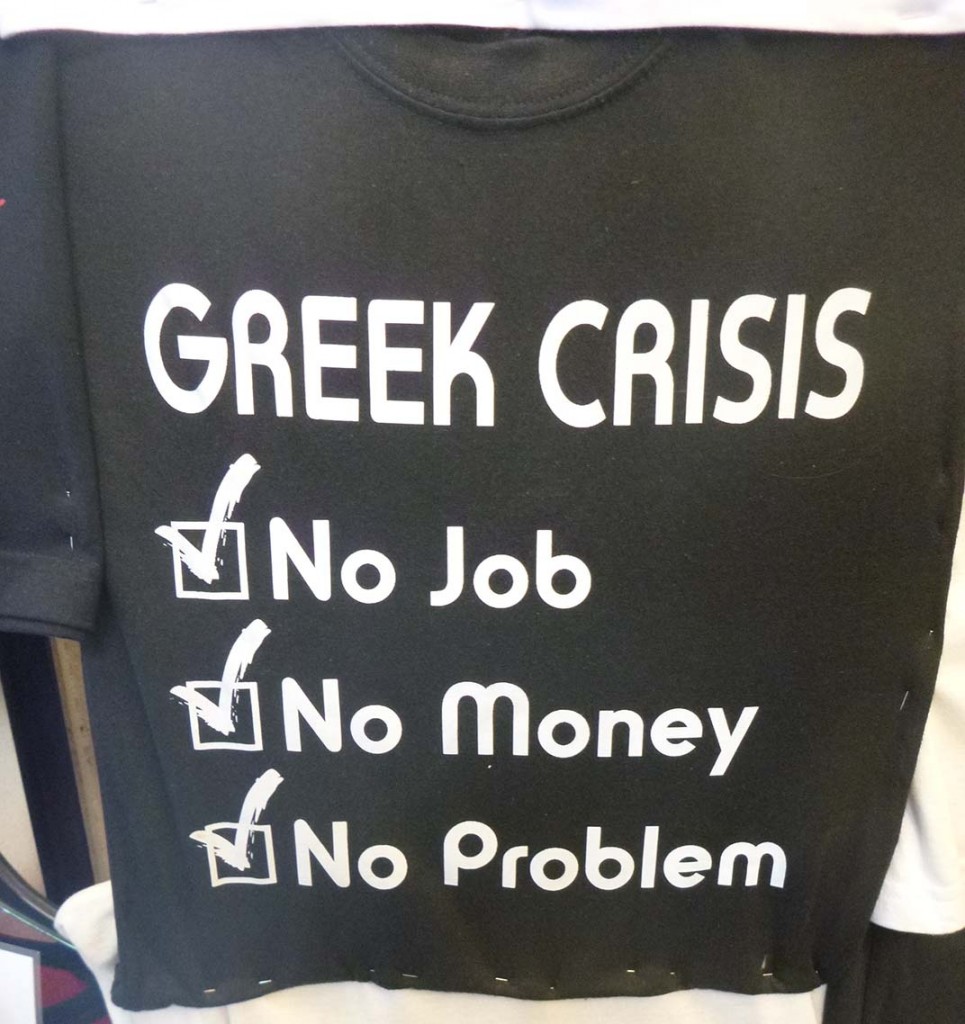 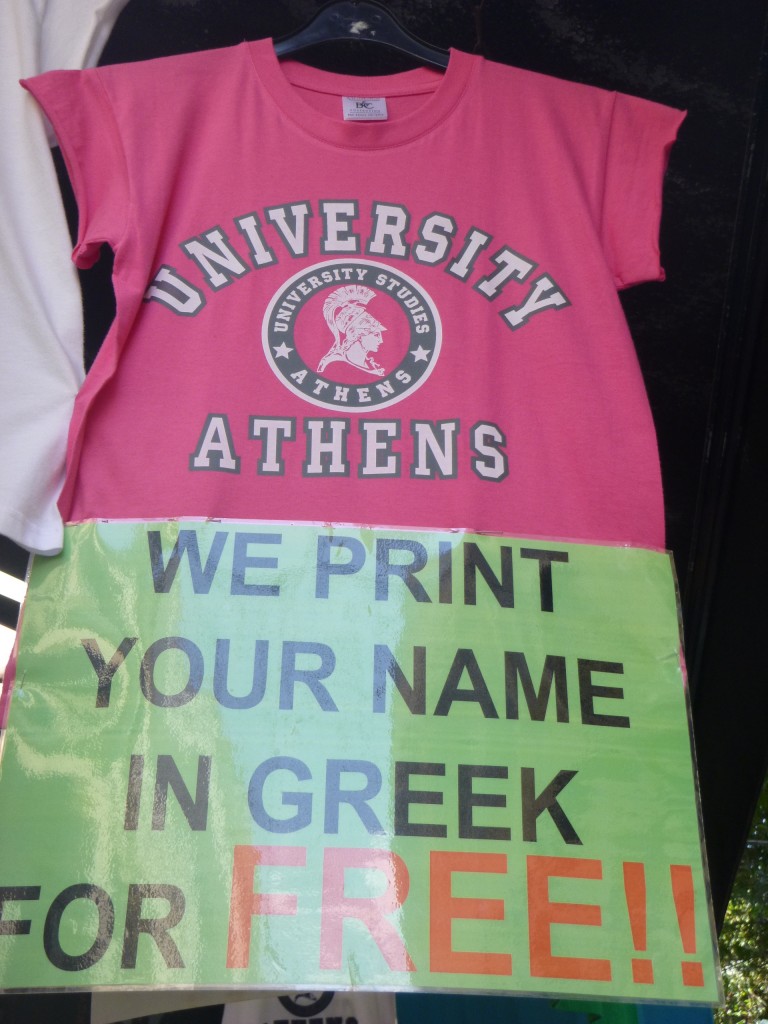 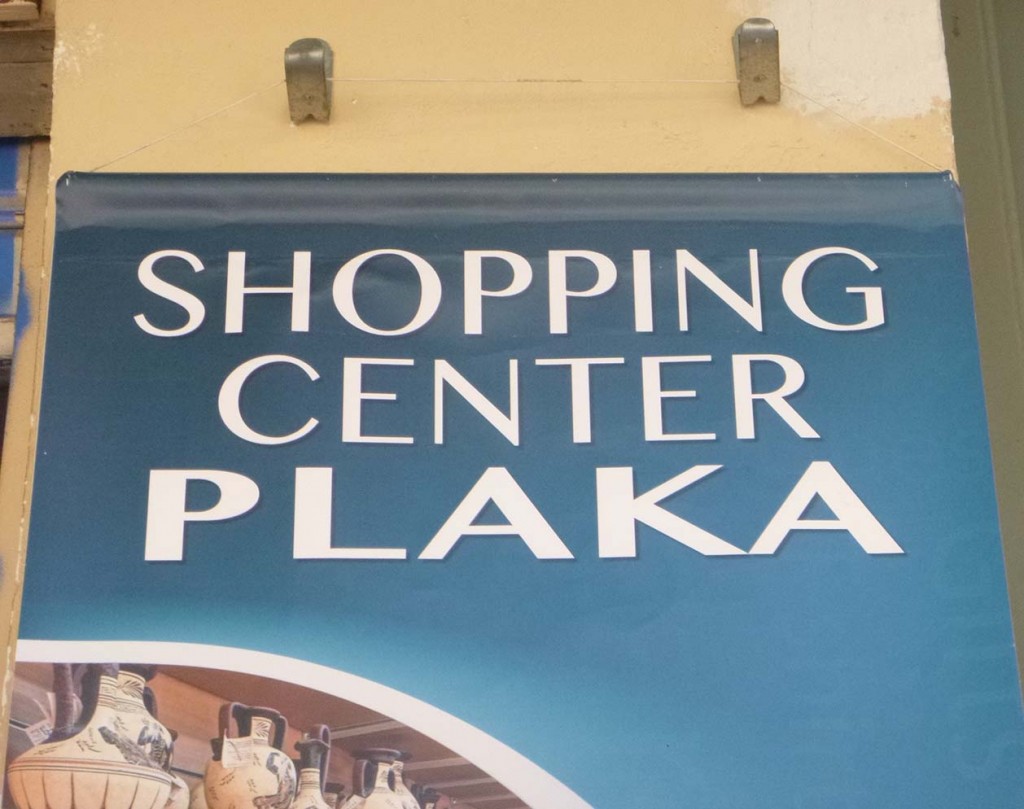 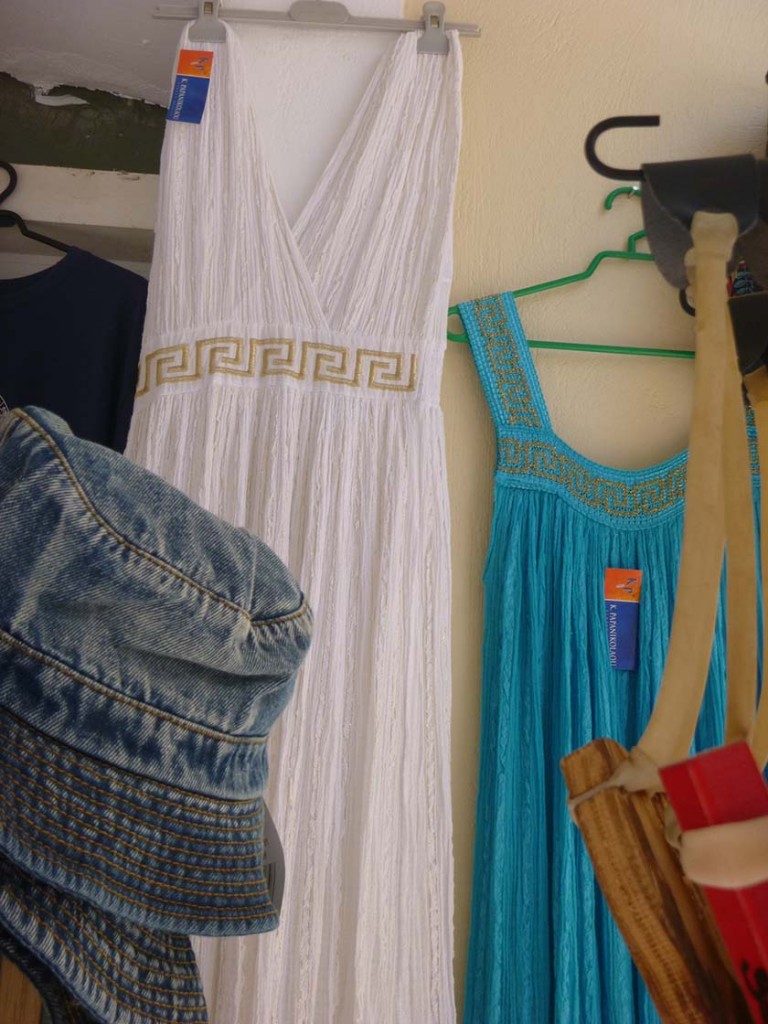