Posted on September 3, 2015 by blogqueendiane 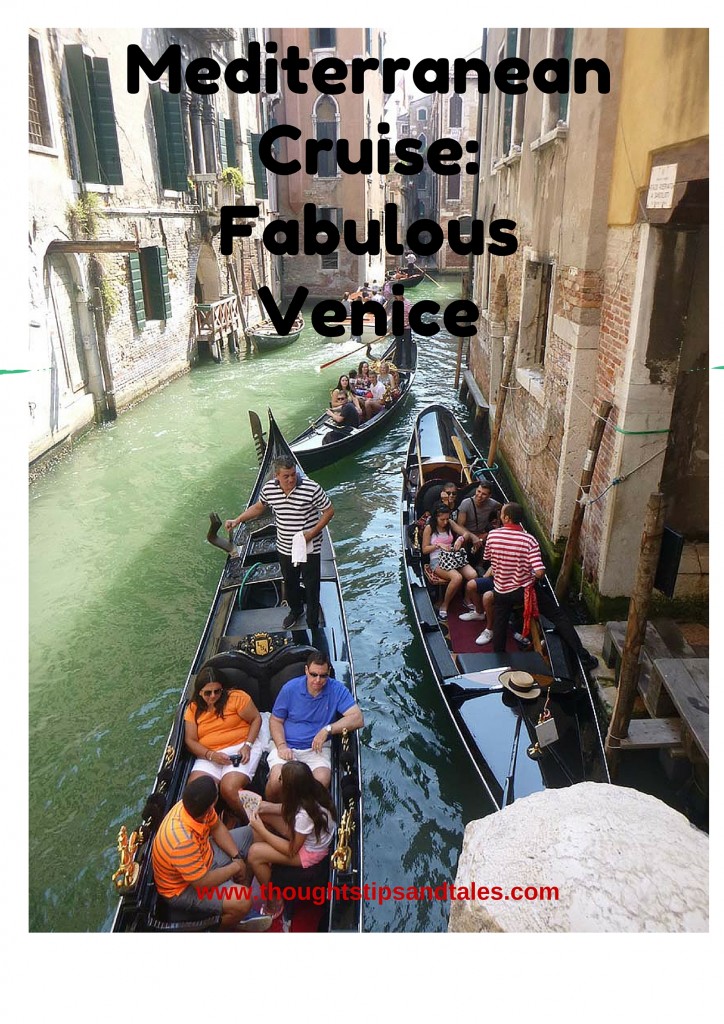 At the end of our Mediterranean cruise, my friend M and I got off the ship and stayed an extra night in Venice before returning to the U.S. (We didn’t want to just fly in, get on the ship, get off the ship and fly home without seeing the sights!)

We took a water bus, using a transfer we bought in advance from Celebrity cruise line, to a spot near our hotel. 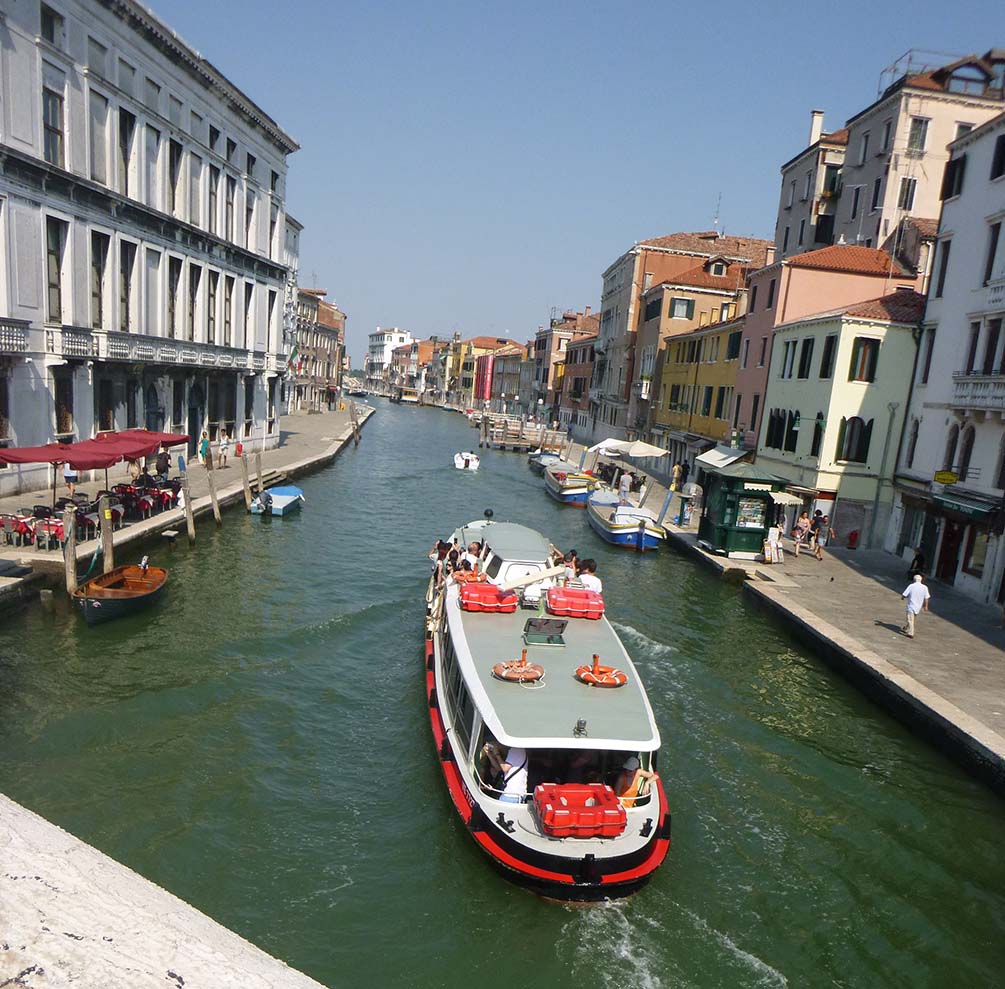 There are no streets in Venice (except for the road that connects to the mainland, and everyone arriving in cars has to park them there), so if you take a boat close to something, you have to walk the rest of the way!

We  rolled our suitcases a short way to Hotel Phillipe, which was located right on the Grand Canal. 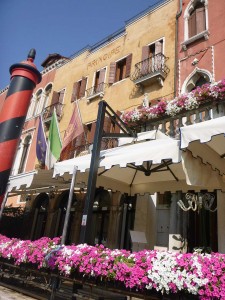 It was very ornate — felt like an Italian contessa staying there. (And it was also very expensive — but that’s another blog post!)

Our room wasn’t ready yet, so we left our bags in the hotel’s luggage room and took off to explore Venice in a day.

The first thing we wanted to see were canals and gondolas — and there were lots of each!

Did you know all gondolas are painted black? Some have ornate gold trim on them — and they cost about $80 a person for a ride! (We just took pictures of other people in them.)

The gondoliers — rugged-looking guys — wear striped shirts like you see in photos, and 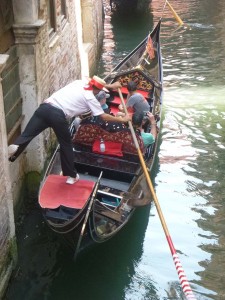 some wear straw hats. When they come close to a building in the narrow waterways, they put their foot up against the wall and push off to avoid hitting it.  (Didn’t see any gondoliers serenading anyone — so maybe that’s just a movie thing.)

Bridges are everywhere — crossing the many, many waterways. The centuries-old buildings are stucco – and they’re absolutely beautiful, with lots of ornate railings, flower boxes and window trim — and fabulous architecture.

Everything is so picturesque!

Everyone we talked to before the trip advised us to just wander the streets and have fun, but our ultimate goals were to see St. Mark’s Square and Rialto Bridge — two well-known sites.

It couldn’t have been easier to wander and still find our way to the two destinations. because apparently everyone goes to these two places — so there are signs on lots of buildings with arrows pointing which way to go. 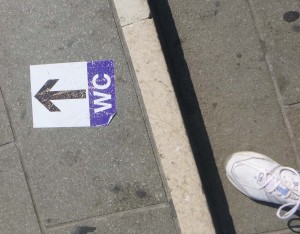 Signs were also painted on the ground with the letters WC (for water closet) that directed people to public restrooms. Again, very easy.

The streets were lined with shops, churches, restaurants, bakeries, gelaterias (stores that sell gelato) and historic buildings, so we wandered in lots of cute shops and took tons of photos of beautiful architecture, canals, bridges, baked goods, churches and more. 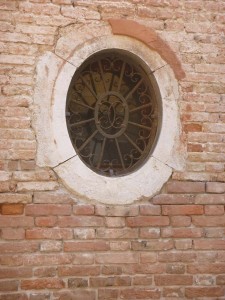 We even went into a “one euro” store (the Venetian version of the dollar store)! 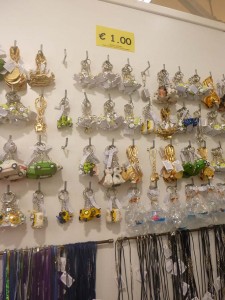 Europeans don’t use much — or any — ice in their drinks, which we really missed on the cruise ship. The ship only served sodas in cans, too, and we both just LOVE fountain Diet Cokes.  So we were thrilled to stumble across a McDonalds, where we bought and drank two large Diet Cokes each (no free refills) and stopped back later in the day for another drink! It was a very humid day near 100 degrees and the drinks really hit the spot.

St. Mark’s Square was wonderful and fairy tale-like. It was filled with people and pigeons (like in the movies) and surrounded by a gorgeous basilica and other huge buildings with intricate, ornate trim. A tower stood in the center. 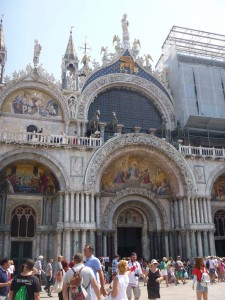 We sat on a bench next to a wide canal with a view of the square where lots of gondolas docked, to people-watch and take in the sights for a while.

And we had the most delicious lasagna ever in a quaint little restaurant.

On our walk back toward the hotel, we saw a charming public fountain where lots of people were filling their water bottles and kids were getting drinks.

In the early evening, we tried to take a round trip on a water bus (similar to a street bus that has fixed stops) around the Grand Canal  but just couldn’t figure out how to do it, even after talking to the woman in the ticket booth and several American tourists. (It was probably a good thing, though, because we were roasting 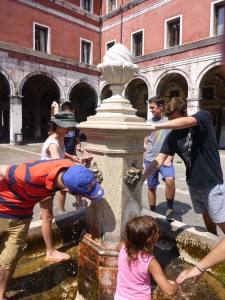 and exhausted by then.)

The next morning, a Celebrity representative introduced us to a tour guide who rode with us in a water taxi (which, unlike a water bus, takes you to a specific destination) to the airport and gave us a tour on the way. She even pulled some of our luggage and walked us inside the airport; it was great ending to a wonderful trip!

If you ever get a chance, go to Venice. It’s an incredibly unique experience — and one of the coolest places ever. 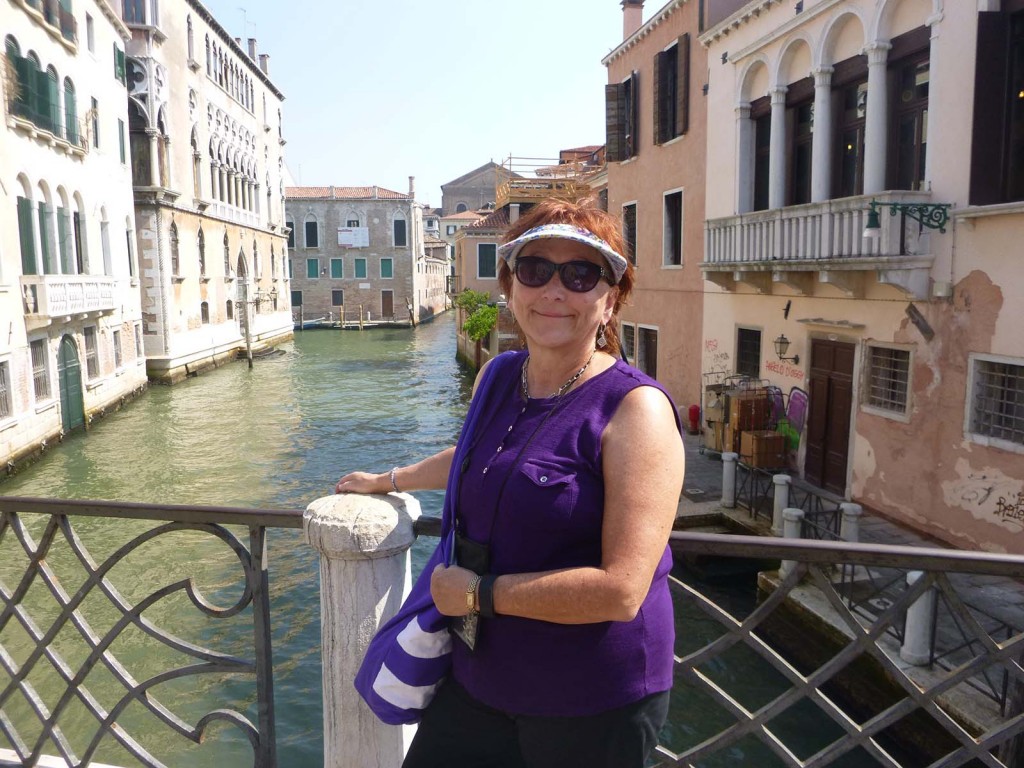 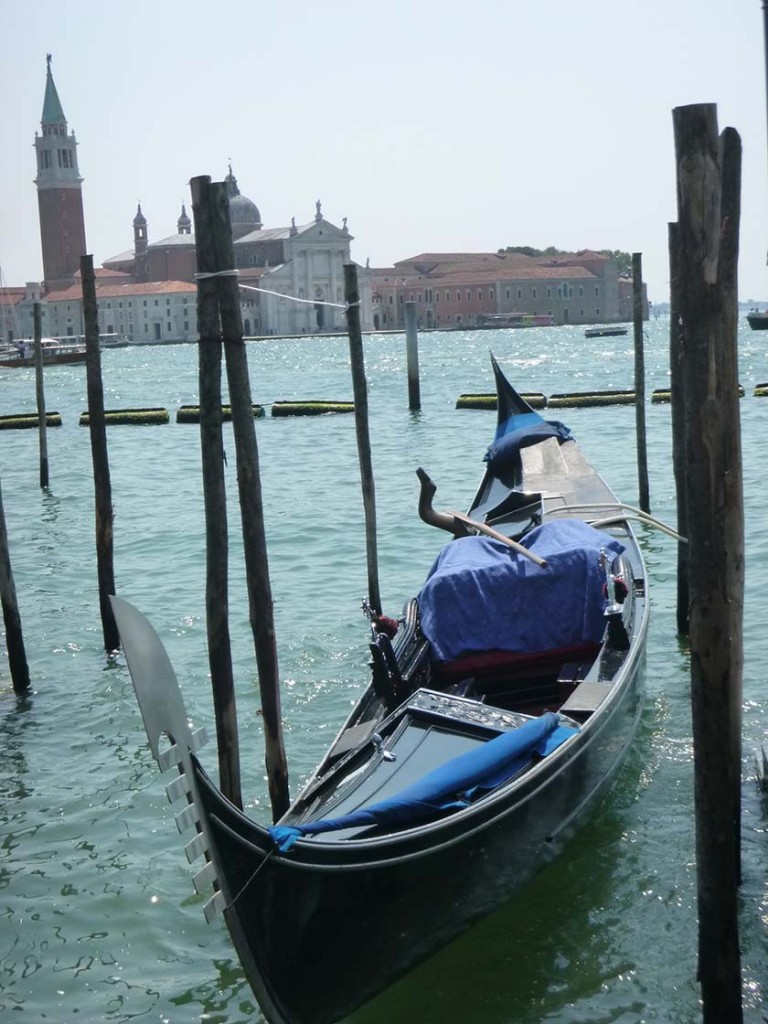 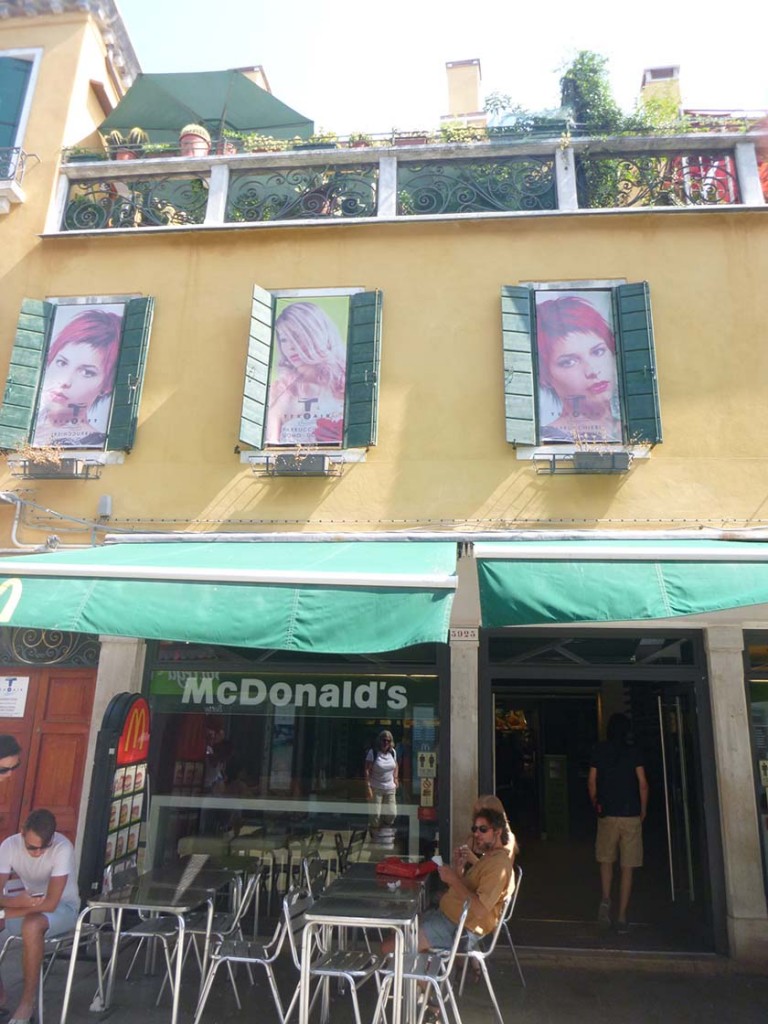 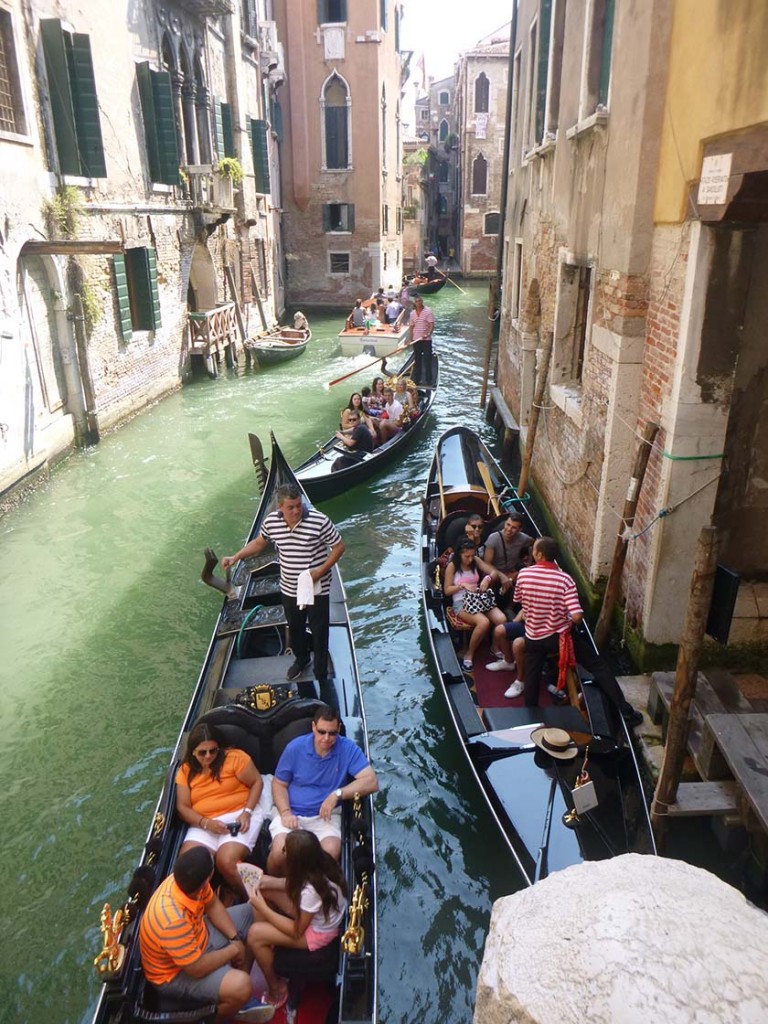 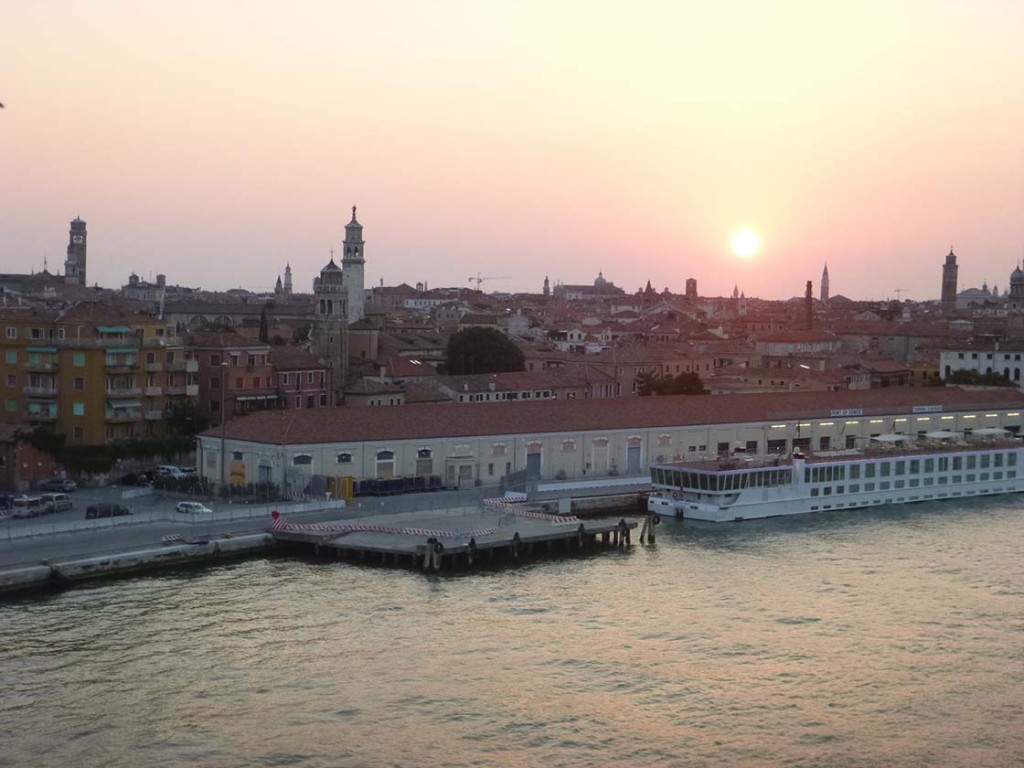