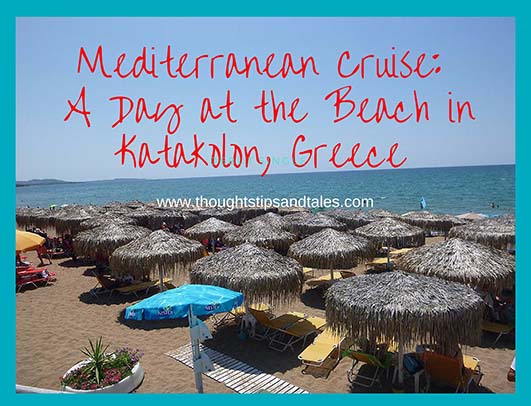 By the last day ashore of our Mediterranean cruise, we were pretty tired from the all-day shore excursions in the preceding days and decided to go to the beach at the port of Katakolon. (The port is also 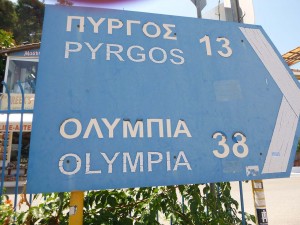 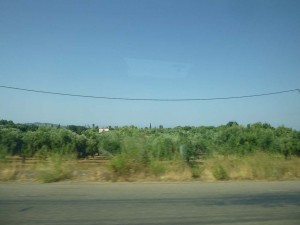 The air-conditioned bus took us for a 20-minute drive to the beach, passing groves of olive trees and cute little houses.

Every few miles, a three-foot-tall stucco statue of a little temple appeared along the main road — sort of like a mailbox, but we knew that wasn’t what they were. They were just beautiful, and every one seemed to be different. 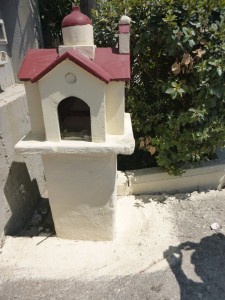 The water at the beach was brilliant blue, and a group of beach umbrellas and lounge chairs were set up for our group in front of a restaurant (that hoped to get our business). We grabbed a spot near the water and settled in.

Our relaxation was interrupted about ten times by vendors trying to sell us various things — massages, watches (who goes to the beach to buy a watch?), jewelry and more. We said no, thanks and finally they went to another part of the beach. (In spite of their recent economic woes, that was the only time in Greece that we felt sort of “pestered” to buy something.) 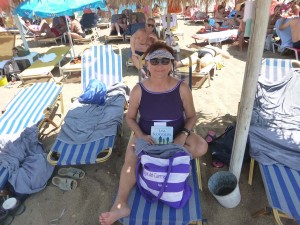 The man on the chair next to us was wearing a Speedo (and really shouldn’t have) and we were entertained by him changing clothes under a towel as the man on the sailboat in Santorini had done. Maybe it’s a European thing; when I was in Nice in high school, the men changed in little tent rooms right on the beach.

When it was time to get back to the bus and leave paradise on the beach, we headed over to a spray hose foot wash to rinse the sand from our feet. It was about 100 degrees and humid, and a chubby little Greek boy whose mother apparently wasn’t nearby grabbed the hose and began to give himself a leisurely top-to-bottom spray bath while about ten adults got in line after him. He didn’t have a care in the world until a man from the end of the line walked up and yanked the garden hose out of his hand — and proceeded to wash my friend’s feet and mine. 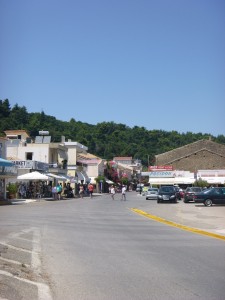 The bus dropped us off in a cute little seaside village full of charming cafes and stores with all kinds of authentic Greek merchandise (yay!) and we had a couple hours to browse around and (of course) get a 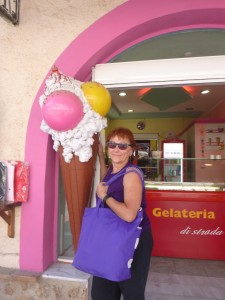 treat at the gelateria to cool off. It was a great day — and we wanted to hug the man handing out the icy towels at our ship to show our gratitude…but we held back. 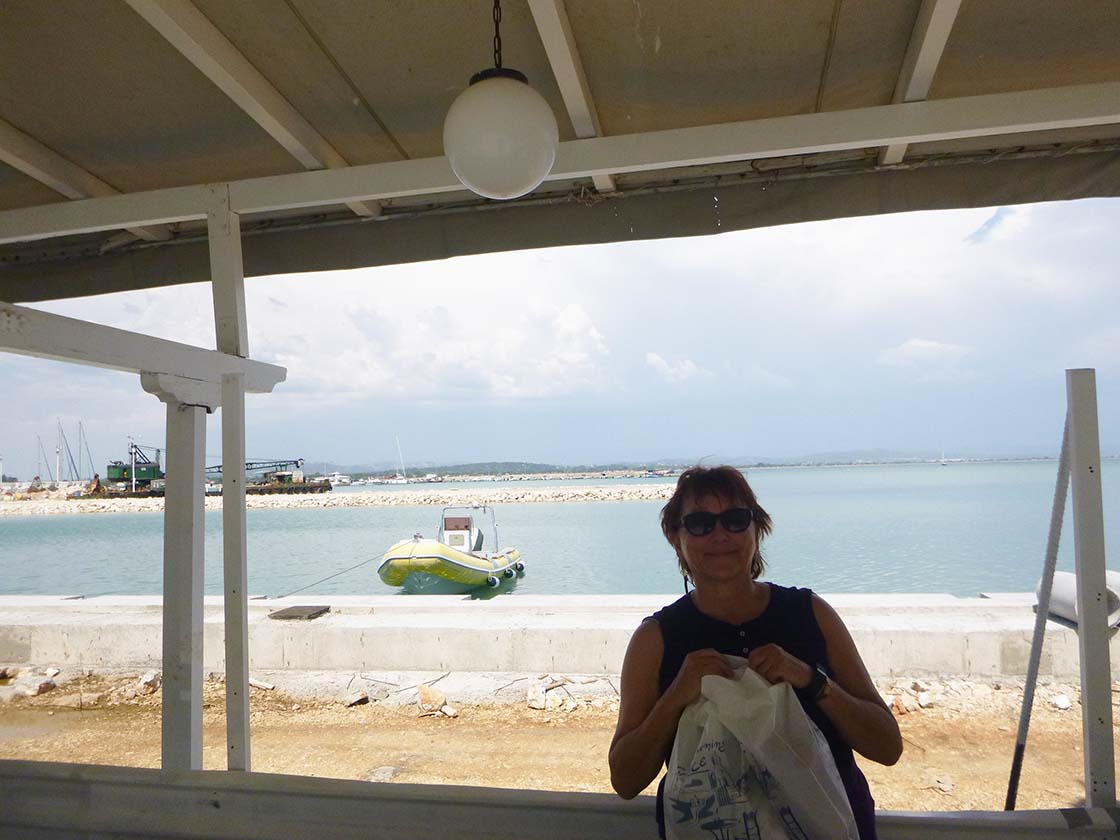 View from the seaside village of Katakolon, Greece 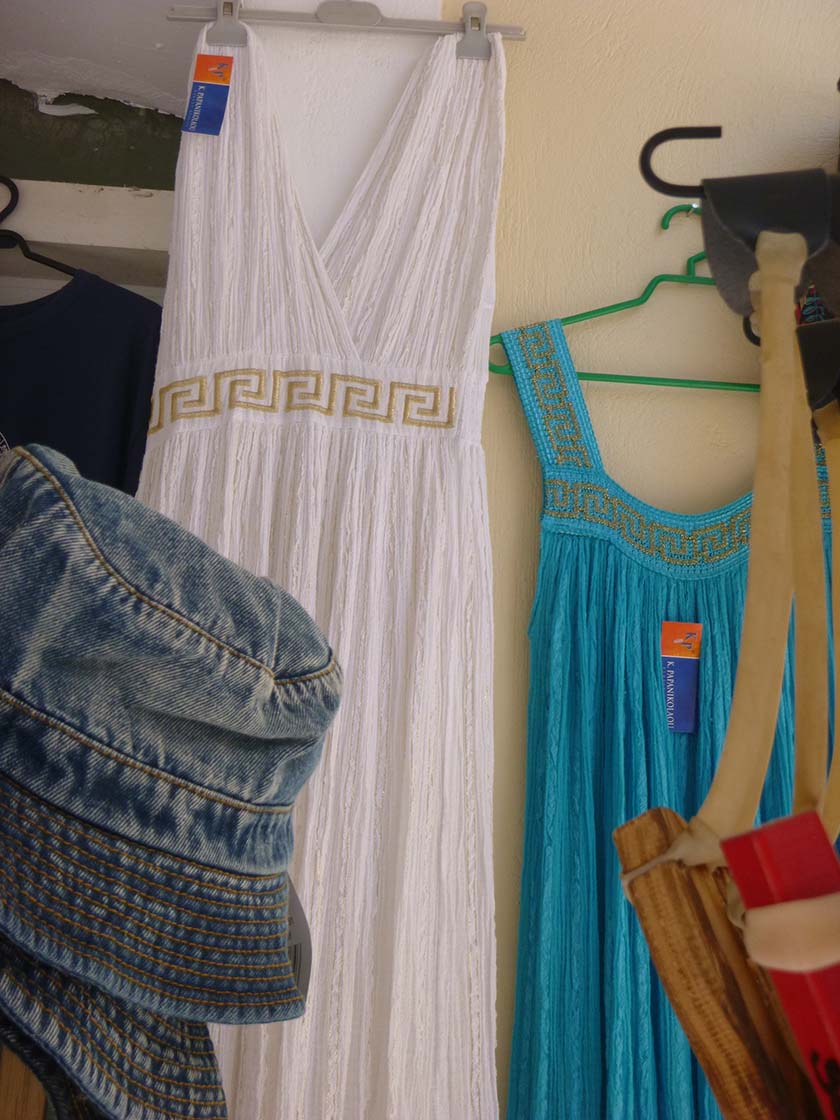 24 Responses to Mediterranean Cruise: A Day at the Beach in Katakolon, Greece