Posted on September 10, 2015 by blogqueendiane 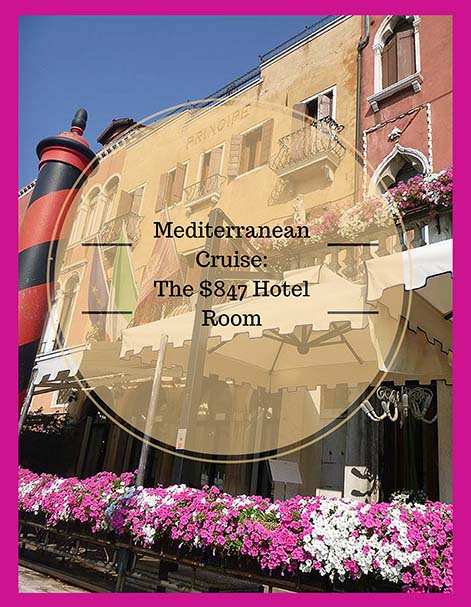 Have you ever stayed at a hotel that costs $847 a night? It sounds like something a rock star would do, doesn’t it?

My vacation fund is zeroed out, but here’s my experience at a European luxury hotel.

At the end of a seven-night Mediterranean cruise, my friend M and I wanted to spend a day sightseeing in Venice (where the ship embarked and debarked), so she made a reservation  through Celebrity cruise line at the hotel their travel agent recommended. The woman told her it’d be 380-some euros, and M OK’d it, thinking that was the total bill.

We were so excited — a four-star hotel right on the Grand Canal!

That is — until we got the cruise invoice and realized that rate was per person…and it was too late to make other arrangements. 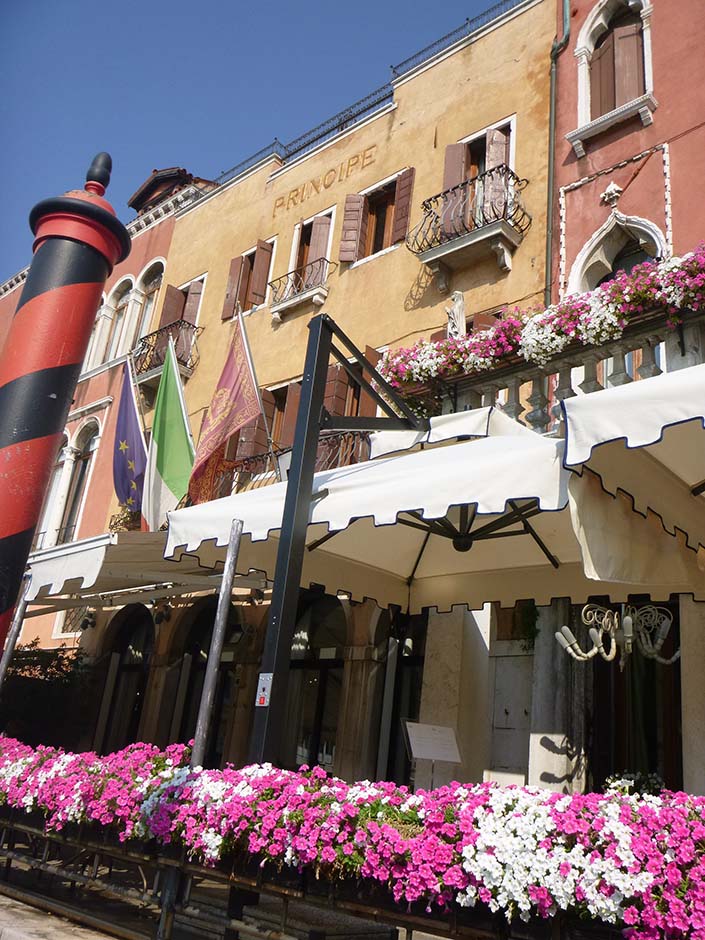 The exterior of the Hotel Principe was lovely (lots of flowers) and in a great location on the Grand Canal, just a water taxi ride away from everything. 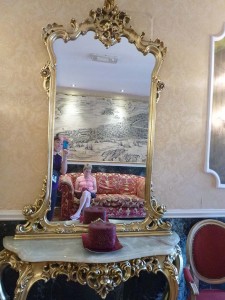 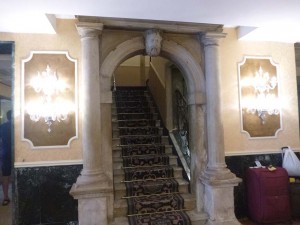 The inside was — well, very, very, very ornate. We kind of felt like we were spending the night in Louis XIV’s palace! 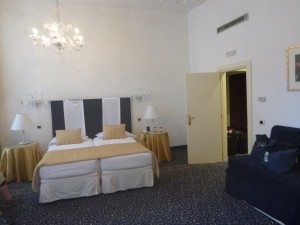 Our room was huge, with high ceilings, and the adjoining bathroom was the biggest one I’ve ever seen. 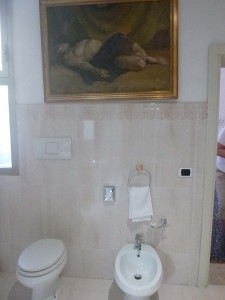 A gold-framed painting hung above the toilet and bidet, and two sinks with ornate silver-and-gold fixtures were located across from that. 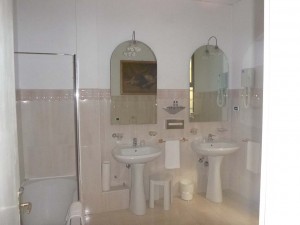 The bedroom windows opened onto a little courtyard, and it had shutters that pulled closed for privacy (which was good, since the people across the way could see right in!) 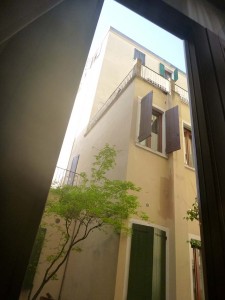 Several large ceiling chandeliers provided light, and  mini-chandeliers were located on each side of the bed.

The two twin beds we requested were right up-close-and-personal next to each other.  My friend and I like each other — but we didn’t particularly want to wake up face to face. However, at that point at the end in the trip, we were too tired to do anything about it — and just hoped for the best. 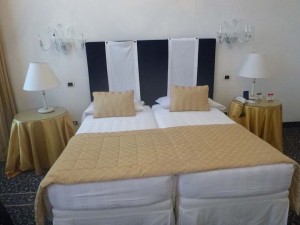 After a day of extreme walking all over Venice (15,000+ steps on our Fitbits!), when we came back to the room we each wanted a refreshing shower.

However, we encountered a little problem. Neither of us could figure out how to turn the shower on! We pulled and pushed on everything we saw, to no avail. (And when you pay $847 for a room, you want to take a shower in it!) 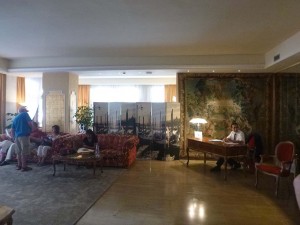 We ended up calling the front desk. A dour-looking Italian man came up, pulled on something and promptly turned the shower on, making us feel like idiots. When we asked him for washcloths (using sign language for teensy, tiny towels), we figured out (and confirmed later) that they don’t use them there. Who knew? 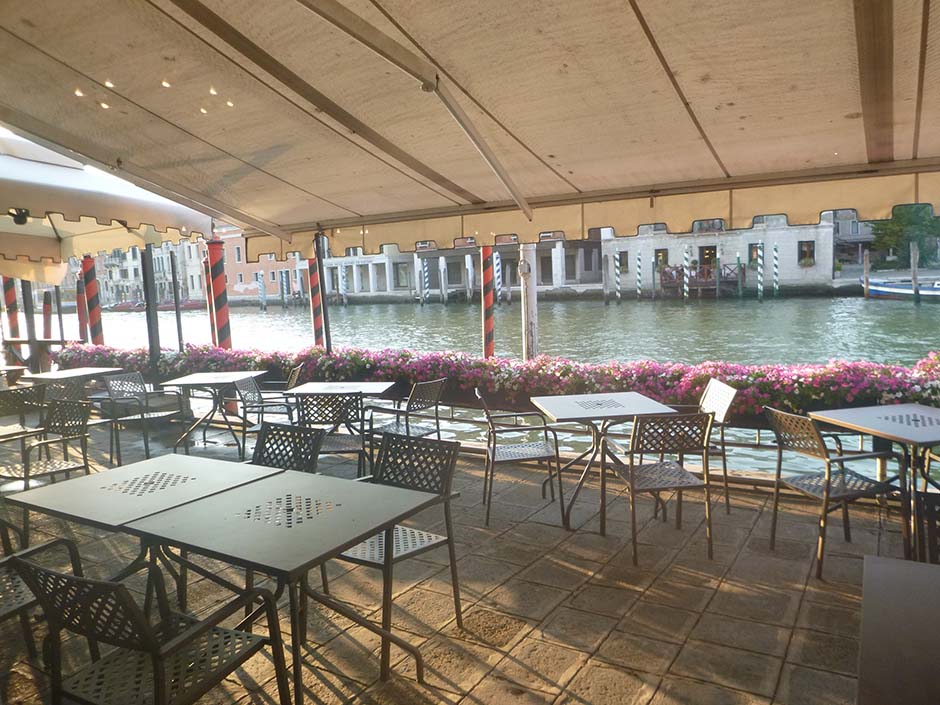 The next morning, we enjoyed a top-of-the-line complimentary breakfast buffet and ate it at tables next to windows that looked out on the patio and the Grand Canal, which was absolutely stunning. (Of course, we had to take a bunch of photos outside afterwards.)

We left for the airport right after that, zooming away from the most expensive hotel room ever by water taxi — a fitting end to our extravagant adventure. 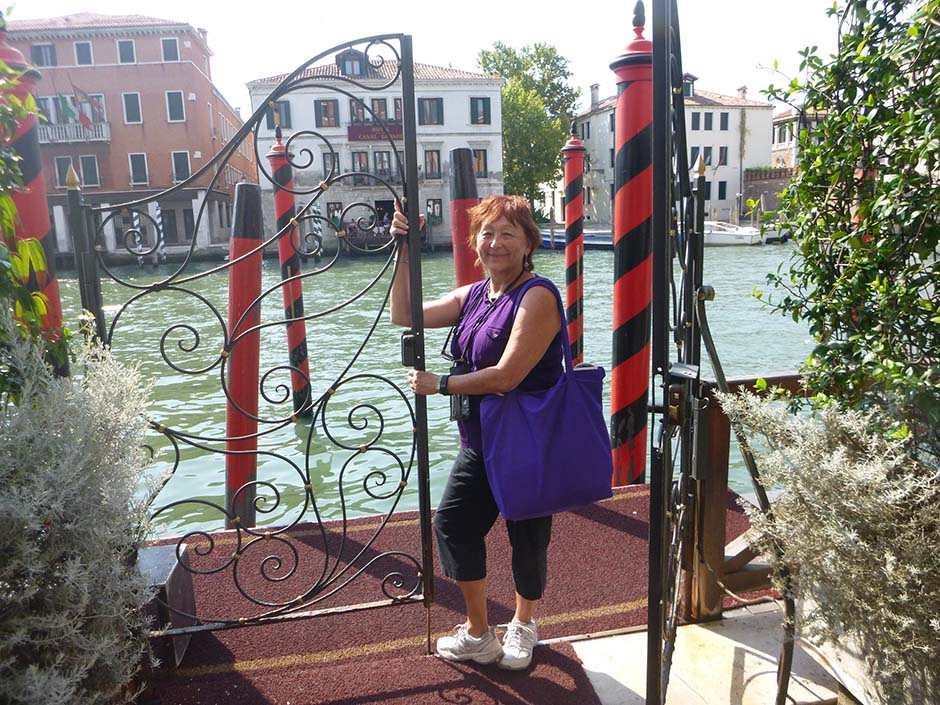