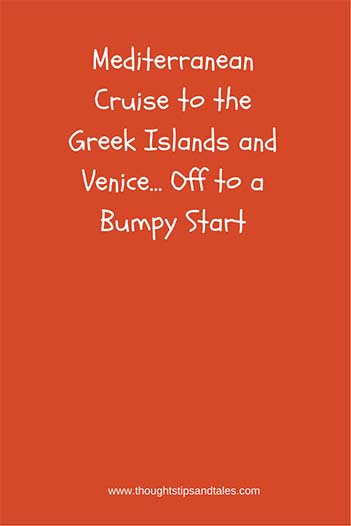 One of my most fun friends, M, and I went on a “cruise-of-a-lifetime” trip to the Mediterranean this month. And we laughed all the way through Italy, Montenegro (who knew that was a country?) and Greece.

I checked my jumbo suitcase with my best cruise clothes through to Venice, boarded a plane in Charleston, S.C., and met her at Dulles Airport in D.C.

We caught up over lunch and flew from there to Newark, and then on to Venice.

The flight attendants gave us dinner at 10 p.m. and breakfast a few hours later at 2 a.m., then we and a bunch of other sleep-deprived travelers shuffled off the plane in Venice at 3 a.m. (9 a.m. their time). 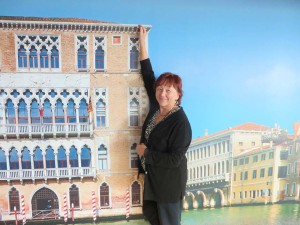 M and I got a second wind inside the airport, posing for photos near the beautifully painted wall scenes and admiring the lovely painted baggage carousel as we waited for our luggage. Her bright purple bag appeared promptly, but we stood … and stood… and stood… until we finally realized my bag wasn’t coming… 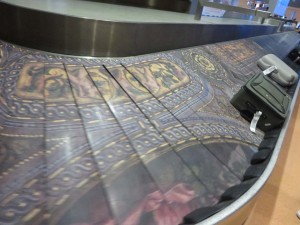 We then spent THREE HOURS AND FORTY-FIVE MINUTES (from 3 a.m. – 6:45 a.m. our time) waiting in line at Venice’s Marco Polo airport “lost and found” windows to file a lost luggage claim.

I thought it odd that the customers were separated from the two clerks by a floor to ceiling glass window — but by 6:45  (when the urge to kill was strongest) I clearly understood why. 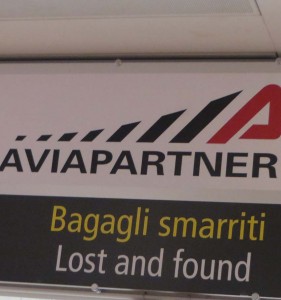 After reaching the front of the line in about 30 minutes (with only one person ahead of me — a man with a broken luggage handle — who, of course, was not compensated — but they did give him a sticker), I was promptly ignored by the clerk. Totally ignored. She got up and came back to her chair several times, sat with her head down, and about 20 minutes later she finally made eye contact.

And she told me I had to go to the next window. (Both windows had signs in English that said “lost and found,” but obviously her window wasn’t the “right” lost and found.)

In the meantime, about eight other travelers with lost luggage had lined up at the window she directed me to. And I had to get behind all of them…

During the next three hours, I was shuffled twice more between different windows, as other customers came after me and were helped at the window I wasn’t at.

At one point, an employee took me across the building to a room full of suitcases, but would only let me look at three of them (which weren’t mine). When I asked if I could look at the others, she said no.

My friend, meantime, saw workers bring a huge cart of luggage to the lost and found area and she went over to see if she could spy a black suitcase with a black and white checked scarf tied on it. She didn’t touch anything and stayed five feet away — but was immediately berated and told to leave the area by an employee there.

As we continued to wait in line, we noticed several more odd things. 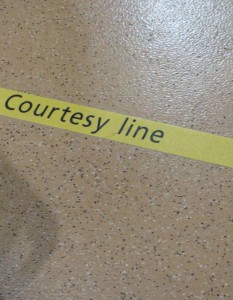 1) A yellow “courtesy line” was located on the floor three feet back from the glass wall. (Since nobody had been courteous yet, I took a photo of it and we keep pointing at it and laughing.)

2) The glass walls between customers and clerks had little semi-circular holes to speak through at mid-thigh level, causing each person at the window to have to bend grotesquely in half to speak to the clerk. (I laughed about it for three hours in line, but darned if I didn’t stoop over and speak into the little hole when my turn at the window finally came!) 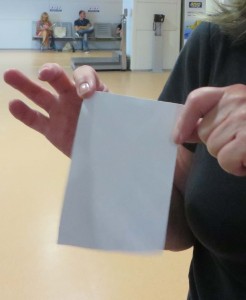 available in a holder outside the lost and found window — was a piece of  hand-cut blank scrap paper. Seriously.

I finally made it to the window (hallelujah!), handed in my “form” with the required data, watched as an employee sloooowwwwwly typed the info into a computer and got a receipt showing my baggage hadn’t arrived.

At long last, we boarded the Celebrity bus from the airport to the ship (thank goodness we got to the airport early!) and made our way through Venice to the cruise terminal…

…where M lost her camera in the security area. (Of course, we didn’t discover that until hours later — and no, she never got it back.)

There’s a six-hour time difference between the U.S. and Italy, so we unpacked (my job was easy – with only a carry-on full of books and a tote bag) and passed the remainder of the 30-hour day exploring the cruise ship and trying to stay awake. (We were afraid to sit by the pool or relax anywhere since we needed to stay awake til at least 8 p.m. Venice time to avoid a messed-up sleep pattern all week.)

It was a rough first day — but, hey, we were in Venice! On a Mediterranean cruise to the Greek islands!

We were there to have fun!

Our plane didn’t crash (we kept reminding each other) and the trip  had to get better.