Posted on October 22, 2015 by blogqueendiane 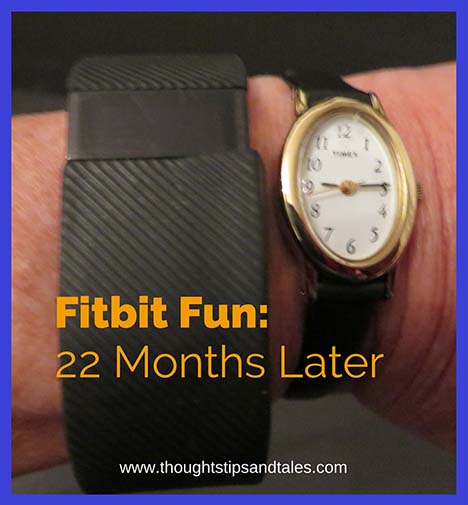 Fitbits are getting more and more popular — and everyone knows at least one person who has one.

I’ve been using a Fitbit for 22 months now — a Fitbit Force for a year and Fitbit Charge for 10 months — and still love it.

The best thing about tracking your steps with a Fitbit is that it makes you aware of how much — or little — activity you do.

And knowing that you’ve been sedentary stimulates you to increase your activity.

Motivates You to Meet a Goal

You set a daily goal — for example, 10,000 steps — on the device and compete with yourself every day to see if you can achieve — or exceed — that goal.

When you reach the goal, the device vibrates — like it’s doing a little victory dance!

You can “friend” other people who have Fitbits on the Fitbit computer dashboard that’s synced with the device — and view and compare daily steps to incorporate a social angle and get involved in a little good-natured competition.

However,  the real benefit — plain and simple — is to inspire you to become a more active, healthier person.

And using a Fitbit accomplishes that.

Fitbits are extremely easy to use. Once you get the hang of fastening the plastic clasp, you’re set.

Syncing the device to your computer is easy; just follow the directions.

And getting info (number of steps walked, distance walked, etc.) is convenient, too — just press the button on the Fitbit anytime you want to see your stats. The Charge even tracks the number of hours you sleep, which appears on the computer dashboard — including the number of times you wake during the night.

Just to be sure the number of steps displayed was correct, I’ve walked and counted my steps, then checked the device. The Fitbit is extremely accurate.

Caveat: Steps don’t accumulate correctly unless your Fitbit hand is loose and hanging at your side. I did a lot of treadmill walking with my hands on the handle bar – and spent many hours shopping while holding packages — before realizing that!

Wearing a Fitbit is habit-forming, too ( in a good way). I wear mine 24/7 because I don’t want to miss a single step if I get up in the middle of the night or lose track of the steps first thing in the morning!

And if I take off my clothes and jewelry to shower, then need to run downstairs to get something — wrapped in a towel, I always hold the Fitbit in my hand to count those additional steps. 🙂

I’m not the only one among my friends who’s paced around her bedroom before bed to reach her 10,000-step goal when she was oh-so-close to it, either.

Fitbits have some shortcomings; it’s not a perfect product (yet).

Clasp Opens and Fitbit Falls Off

The clasp comes unfastened occasionally and the Fitbit falls off, even if you wear a special accessory to hold it on. The accessory really helps — but you have to keep an eye on the device!

I woke up one morning recently and, an hour later, realized my Fitbit was gone. After searching the sheets and retracing my steps, I realized (eureka!) I could go to the Fitbit dashboard on my computer to see what time my activity ended — and know when the Fitbit fell off.

The dashboard indicated activity stopped around the time I got up.

Since I had to go to work, I didn’t have time to search the house more thoroughly.

When I got to work and opened the drawer in my desk to put my purse in it, my Fitbit was lying on the floor below the drawer! Therefore, I had to have lost it sometime before 5 p.m. the previous day — yet the dashboard didn’t show activity stopping then. Hmmmm.

I understand that a phone app is available to track and help find lost Fitbits — need to look into getting that!

I’ve had two Fitbits. The first band fell completely apart in a year, and I returned it and got my money back because the device had been recalled (due to some people getting a rash from the band; it didn’t happen to me). Bands of newer models contain different components and are ribbed.

The band on the second Fitbit is, after 10 months, starting to come apart near the digital display — just like the first one did (see photo above). I assume it, too, will fall completely apart. 🙁

Several friends have contacted Fitbit for various issues — including the fact the device fell off and was lost — and Fitbit provided them with a replacement product.

And I’ve been happy every time I contacted them, too. They have great customer service!

I hope when I have to “call it a day” with the current device and contact the company, they’ll be gracious enough to give me a replacement, too. Because I don’t want to stop using a Fitbit!

Fitbits usually sell at manufacturer’s suggested retail price and rarely go on sale, but check Groupon before you buy one. Fitbits are sometimes available at prices reduced up to 12%.