Decluttering and Organizing the Refrigerator: An Amazing Transformation 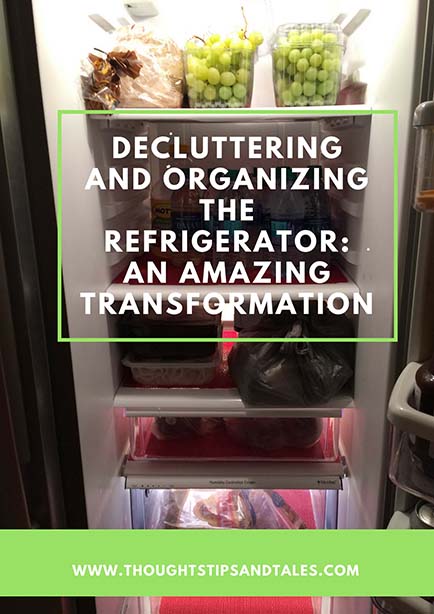 As part of my home decluttering project (OK, it was my 2016 New Year’s resolution, but who says it can’t continue in 2017?) I recently took my frig from chaos to calm. Decluttering and organizing the refrigerator resulted in an amazing transformation.

The freezer looked good because I decluttered that with organizer bins, but the frig interior was a disorganized mess — and when stuff spilled, it looked even worse. (There’s no “before” photo here because it was too embarrassing.)

As we all know,  when frig contents spill, the mess isn’t contained to that space. It spreads all over the glass shelf and down the walls and the doors and ends up on the bottom landing…

It’s a chore to remove contents and scrub everything — and there’s always the chance you might drop the glass sheet and break it when it’s soapy and wet.

An interesting tip I read late last year suggested that covering glass shelves with washable placemats was a great solution for spills, since the liners themselves can be removed and washed without having to remove and scrub the shelves. 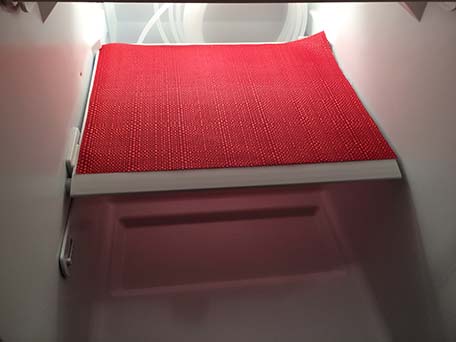 I then saw a picture on Pinterest of a frig with cheerful red vinyl placemats on each shelf — and it looked so neat and festive that making my refrigerator look the same became my goal. The only problem was that obtaining a complete set of enough red placemats to line all the shelves and inside the bins is virtually impossible to do before and after Christmas…

By April, though, I snagged 7 red linen-looking placemats at Steinmart for $2.99 each and was ready to go.

Unfortunately, procrastination — and life — stepped in, and I finally completed the project in June.

Despite the delay, the project was a huge success — and it took only an hour to remove all the shelves and wash the entire interior of the frig, then cut the mats to the correct size and position them. 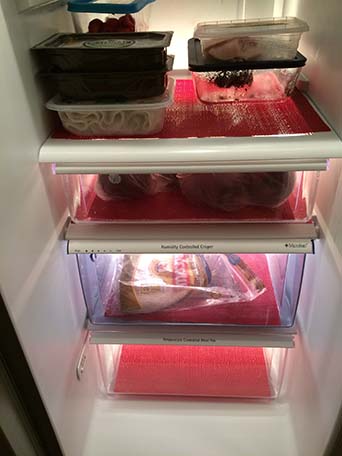 Doesn’t it look fabulous?! The interior is so tidy that it makes me want to place frig items  in neat piles all the time now.

Decluttering the Freezer and Organizing with Storage Bins

Decluttering the Bathroom: Week 8 of 52

Decluttering Kitchen Cabinets: ALL of Them at Once!

1 Response to Decluttering and Organizing the Refrigerator: An Amazing Transformation