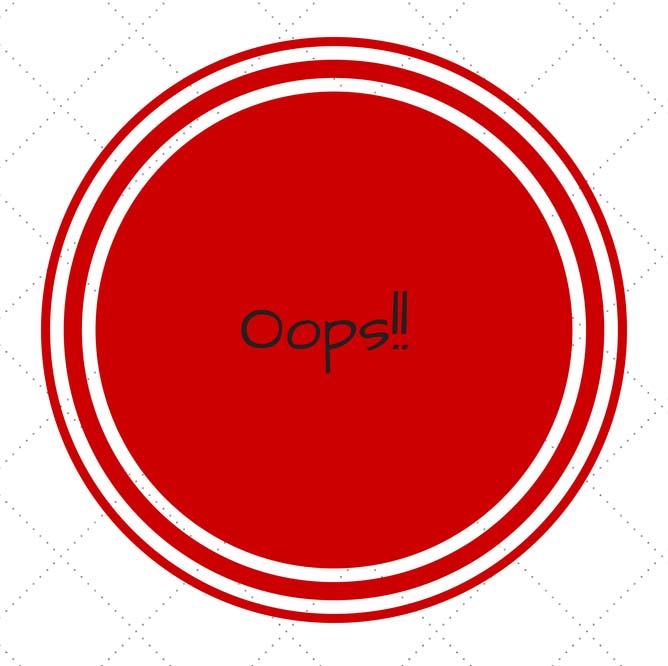 Everybody “makes mistakes” occasionally. (When my son was small and did something wrong, he’d say “Oopsie…” in his cute little boy voice.)

Six of my dumbest moves are listed below. (Some things happened many years ago, but I still shake my head and sort of blush thinking about them…)

1) While walking quickly through a parking lot with eyes ahead, I tripped and flew through the air, narrowly avoiding a fall, right in front of my destination store. When I entered, several clerks were snickering. I asked, “Did you see me?” and they answered, “Yep,” and kept right on laughing.

2) When I worked in a hotel, I had to use the hotel’s lobby restroom all the time. One day, I finished the last of the toilet paper on the roll in one of the stalls, and tried to insert the spare roll sitting on top of the container inside it. The TP dropped into the toilet as it was flushing and got soaked. It was totally unusable. I went into the other stalls to get more, but none of them had any paper. So I had to go into the lobby and whisper to the hotel manager, who I barely knew, that I’d dropped the last roll of TP in the toilet. (This story was always my son’s favorite “dumb things that Mommy did” tale when he was young — boy, how he loved them! — and he gleefully recounted it many, many times.)

3) I fell about a month ago — sideways — after carrying heavy items and bumping onto a short, thick pole on the edge of the sidewalk. I looked up from the ground in horror to see if anyone saw me, and thought the coast was clear until a male voice behind me said, “Need some help?” I asked if he’d seen me fall and he said, “No, but I saw some feet flying in the air.” (He probably also saw my underwear.) Fortunately, he insisted on helping me carry the items to my destination.

4) When I was a 20-year-old newlywed, I went to a glass cutter to buy glass to protect the top of a small end table, having no idea whatsoever how much glass cost. The man cut the glass, rang up the cash register and said, “Sixty-seven.” I blurted out in shock, “Sixty-seven DOLLARS?!” He looked at me like I was an idiot (I was) and smirked, “Sixty-seven CENTS.”

5) I stood on a bucket to fix the garage door, fell off and broke my foot. (That’s a future blog post…)

6) I was in a children’s running race … and, oh, it’s too embarrassing to tell. Just read the blog post, OK?