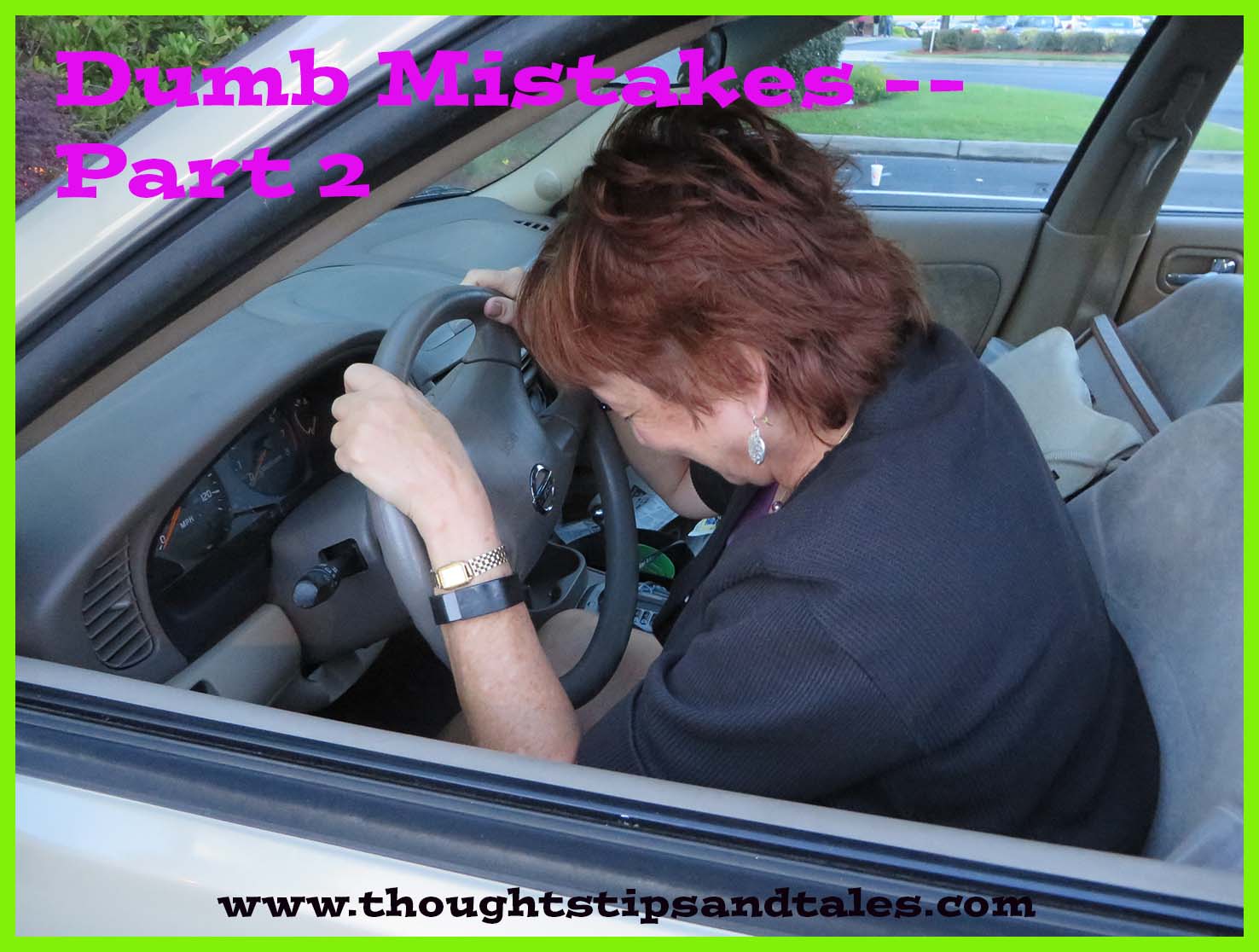 My previous blog post — Unforgettable for All the Wrong Reasons — described some of my most glaring mistakes — away from work. However, upon further reflection, I realize I’ve made some blunders in the proximity of work, too.

1) When I pulled out from the side street to the main road after work one night and got into the middle lane to turn left about 1,000 yards down, there was an extremely long line of cars ahead and traffic was at a standstill. Since the road had a middle turn lane all the way to the traffic light, and that was my ultimate destination, I decided to just breeze right down it and save myself from sitting through five or six traffic lights. (I think I realized at the time it was illegal, but … I gave in to the lure of getting home a little earlier.)

Once I changed lanes, I even saw a person standing in the traffic lane next to a car down the road (what was up with that?), but I kept driving.

Well, it turned out that person was a police officer… and he was giving someone a ticket for doing exactly what I was doing.

When he stopped me, he shook his head and said he couldn’t believe that I hadn’t pulled back into the regular traffic lane before driving by him and forcing him to give me a ticket, too. Ouch — way to make me feel dumb. It was a big ticket, too — $250.

My favorite officer parked his cruiser adjacent to the same road (a gold mine for him, as it turned out) for the rest of the week, presenting many of my coworkers with the same $250 present.

To this day, when I leave work almost everyone who’s ultimately turning left at the end of the road like I am gets in the center turn lane and zooms down the middle of the road. But not me! I learned my lesson the expensive way.

2) I used to go out on my lunch break every day to a fast-food restaurant near work and buy a Diet Coke (my addiction) to go with the lunch I’d packed. It — and my workplace — are both located in a sketchy part of town.

One day, I went to the drive-through and got my drink, then parked in front of the store to eat my lunch. It was a beautiful spring day and my window was rolled down as I enjoyed the lovely weather.

Suddenly, a man in a chef jacket appeared at my open driver’s window. He told me a convoluted story about how he didn’t have any money, was stuck away from home, was hungry, etc. And he asked me for money.

Unfortunately, nobody in the parking lot or restaurant could see me and the panhandler, because the only open parking spot had been at the end of the row next to a giant Dumpster, out of view of the store’s glass window, the other customers and the businesses next door.

I felt like I had to give him something to make him go away  — and not hurt me! Visions of a knife-wielding ax murderer were racing through my head as I opened my wallet. Unfortunately, again, the smallest bill I had was a 20.

With a sinking heart, I gave the “stranded man” the $20 bill, quickly started my engine,  drove off and breathed a shaky sign of relief.

When I told my coworkers the story (“Are you crazy?” and “You gave him $20!” were some of their comments), they made me promise to never park and eat there again  — and I never have.  I buy my drink and motor back to work.

What dumb moves have you made at or near your workplace?