Confessions of an Adult Learning to Swim

Posted on June 9, 2014 by blogqueendiane 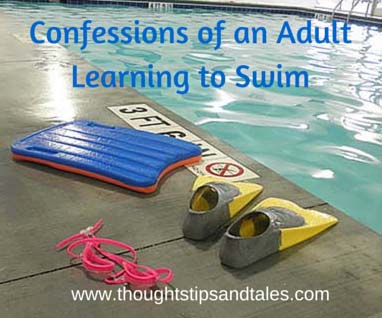 I had a rather depressing milestone birthday this year and around the same time, a friend asked if I’d like to participate in a women’s empowerment mini-triathlon in September with her. It sounded like an intriguing idea – just what I needed this year to prove to myself I’m not yet “over the hill.”

I was a member of a bicycle club (OK – it was 20 years ago) and went on several 50- and 100-mile rides as well as weekend biking trips, and I’m currently a member of a local walking club that covers long distances at a very brisk pace. The most challenging part – aside from having never done any competition such as a mini-triathlon  before – is that I really don’t know how to swim.

My less-than-stellar swimming record didn’t stop me from going to the swimming pool with friends every day of summer during junior high. I could jump off the diving board and make it to the ladder on the side of the pool without drowning , and that’s all that mattered. My primary goal was to hang out with the boys in my class, although their idea of fun was sneaking up on the girls and dunking them.

Back to the present… I recently enrolled in private swimming lessons as a “mature adult” and it’s been a humbling experience.

First, I put my belongings in a cute little “cubbie” (just like a kindergarten student) and wait for the three-year-olds in the “Mommy and Me”  swim class to exit the pool. Maybe they think I’m just a big kid (?), but I feel kind of foolish standing there in my black one-piece bathing suit, towel in hand.

The first night, my young (but patient and kind) teacher asked me to show her how I swim, after I immediately confessed, “I really don’t know anything about swimming. Just treat me like a three-year-old, OK?”

I cringed and complied. After watching me flail around in the water, she crossed her arms and said, “Hmmm.”

She returned with a small foam kick board and showed me how to hold it out in front of me with my arms straight and practice kicking. After a while, she asked me to kick across the pool (which is only about 15 feet wide). I moved forward about six feet and then kicked and kicked as my feet sunk to the bottom of the pool and finally asked, “Why am I not going anywhere?”

She responded again, “Hmmm.” This time, she returned with a pair of fins and had me put them on.

I practiced kicking in them, while holding the board, and, lo and behold, I made it across the pool! Success at last!

That weekend after my weightlifting class at the gym, I got in their pool with my own little float and tried to swim across. No go, without the fins. Finally (although we hadn’t officially gotten to that part in my lessons yet) I used my arms, and — yay! — made it across the pool 10 or 12 times, stopping after each crossing. It wasn’t a total success, as I realized I didn’t have the “putting-your-face-in-the-water-and-lifting-your-head-to-breath-after-three-counts” part mastered after I gulped two huge mouthfuls of highly clorinated water. Ick.

At lesson #2, I broke out my hot pink goggles (because, wow, does the chlorine make your eyes sting when your face is down in the water). It was also a nice look with the yellow fins. (I haven’t been able to make myself buy a (no doubt highly flattering) swim cap yet, but I can see that coming… really don’t want my hair to turn green…)

The second night, the teacher taught me to use my arms. It’s really confusing to think about moving your arms, kicking your legs, keeping your legs straight, counting to three with your head under the water and then coming up for air and breathing without swallowing water, and doing it all again..and again. I did make it across the pool a few times and considered the evening a success.

The teacher videotaped me swimming during the lesson as a learning tool. (Now THAT video will not be appearing on UTube.) It’s definitely a “before” — and I can only hope there’s one later that qualifies as an “after.”

Will I progress from being unable to cross a 15-foot pool to swimming 250 yards by September?

I’m an extremely determined individual, am normally pretty athletic (despite the childhood fiascos of swimming lessons and my first running race) and am highly motivated by a challenge. (I also admit that, as a very frugal person, I’m partially motivated because of the $$$ paid for the series of private swimming lessons.)

In the end, I guess it all boils down to the age-old question of whether you can teach an old(er) dog new tricks…

45 Responses to Confessions of an Adult Learning to Swim