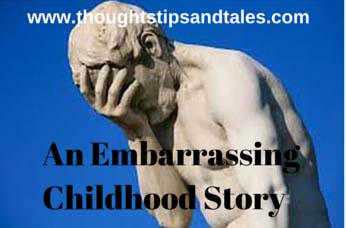 When I was about 8 years old and my sister was about 5, we went to a children’s running (race) event in my small town at the ball fields behind the community center. It was the first time we’d ever done anything like that and there were lots of participants and several hundred parents in the bleachers watching the event. We were pumped up to do something new and exciting.

My little sister was in a separate age category from me, and her group ran first. She ran really well in several events, coming in first or second place.

When it came for my age group to run, I lined up with everyone else, and took off. Well…. I must’ve tripped over my feet or something, because about ten feet into the race, I fell forward and landed flat on the ground. Humiliated, I decided to just stay there, face down. 🙁 (That was a classic example of not really thinking things through… although it seemed like a good idea at the time.)

And I didn’t get up — that is, until my poor dad came down out of the stands and helped me off the field. Talk about being red-faced and shamed! (He was very kind, though, but years later I realized HE was probably also humiliated.)

My sister didn’t mention my mistake or rub it in, but she did smile all the way home, holding a lap full of trophies.

Although I never liked running (for obvious reasons), I actually became pretty athletic after that – was an alternate on the high school tennis team, played lots of sports over the years, completed several 50- and 100-mile bike rides, and have exercised religiously three times a week for more than 25 years. This event, however, was not one of my athletic triumphs…

13 Responses to An Embarrassing Childhood Story