More Embarrassing Stories — #4 in What Seems to be a Series…

Posted on January 23, 2015 by blogqueendiane 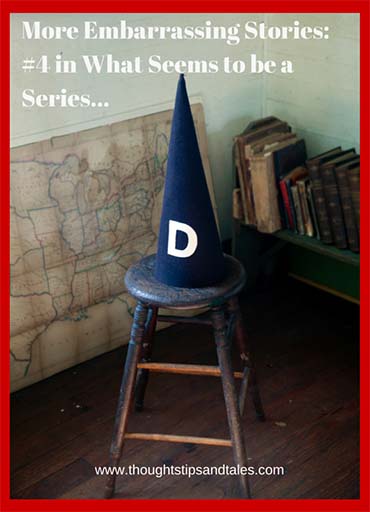 Do I have more embarrassing experiences than the average person? Or does everyone else just know enough to keep quiet about their misadventures?

Here are some more dumb moves, in what seems to be a series of blog posts…

1) One day, I came out of (of course) the thrift store, and found a magnet adhered to the rear of my car that read “Don’t Text and Drive.” I passionately believe in that, so I left it on the car.

Months later, I was stuck in barely-crawling summer traffic and pulled out a magazine to hold on the steering wheel to read while inching ahead.

Seeing the sign on my car, a bunch of kids pulled up beside me and yelled “What a hypocrite — don’t read and drive!” to me (and a few other not-so-nice things!) when they saw me… It was pretty humiliating.

2) In high school gym class, we had a series of lessons on a large trampoline. The main thing the teacher stressed was to fold your knees up to your chest when you landed. I found out (the hard way) the reason for that rule when I failed to do it and jabbed my knee in my eye, resulting in a massive black eye. After being black a few days, the skin around my eye then turned brown, then yellow, then a greenish color… over the next few weeks. Fortunately, back in the day we all wore wild-colored eye shadow, so I could match the color on the uninjured eye to match the bruised eye… (It still looked weird.)

3) I had a 10-year period of very bad luck on jobs when I first got divorced and my son was young. Once went on a job interview directly from a workout at the gym. Forgot to bring a bra to wear under — of all things — a silky blouse. If that wasn’t bad enough, at the interview they insisted on videotaping me (for some reason I forget now). So I had to keep tugging at my blazer jacket to try to hide my chest the whole time I spoke. It was horrible. And I always imagined those people kicking back to watch the video later and laughing at me! (Didn’t get the job, either.)

4) At another job interview during the tough years, I had a long, one-on-one conversation with a male interviewer. I thought it went well until I walked out of the building and past a reflective surface. Realized then that a big, white shoulder pad had come loose and had been dangling conspicuously out of the neckline of my blouse the entire time. (I wonder what he thought it was? Didn’t get that job, either.)