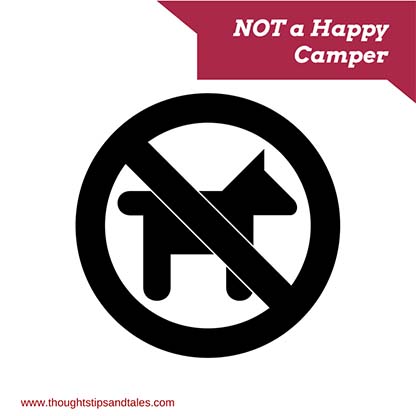 During my freshman year of college at a small, very conservative college in Pennsylvania, I went out a few times with J. I wasn’t physically attracted to him at all and was actually kind of repelled – but I didn’t know many people and he was OK to hang out with.

Unbeknownst to me, after two dates J told all his friends he and I were going camping on the weekend and invited them and their dates to go, too. When he finally told me, although I didn’t want to go, I realized if I didn’t go, nobody else could. So guilt led to my first camping trip…

On Friday night, about six couples — with tents and gear — arrived at a wooded camp site in the middle of nowhere. After putting up the tents, we cooked dinner and sat around the camp fire in the dark, talking. During the evening, a mangy-looking, large stray dog (where did he come from?) kept nosing around me. (Isn’t it weird how dogs instinctively know which people don’t like them, and constantly pester them?)

I tried to ignore him, because I’ve always been afraid of dogs.

Later, everyone got in their tents to sleep, and I slept on the ground next to J.

When the sun woke me up in the morning, I opened my eyes and saw J lying asleep next to me. That wasn’t my favorite sight, so I rolled over.

There, with his head on my pillow, was the icky stray dog — nose to nose with me! He’d apparently slept there all night.

I was so grossed out that I never went camping again!

14 Responses to NOT a Happy Camper