Visiting Russia on a Baltic Cruise

Posted on July 9, 2019 by blogqueendiane 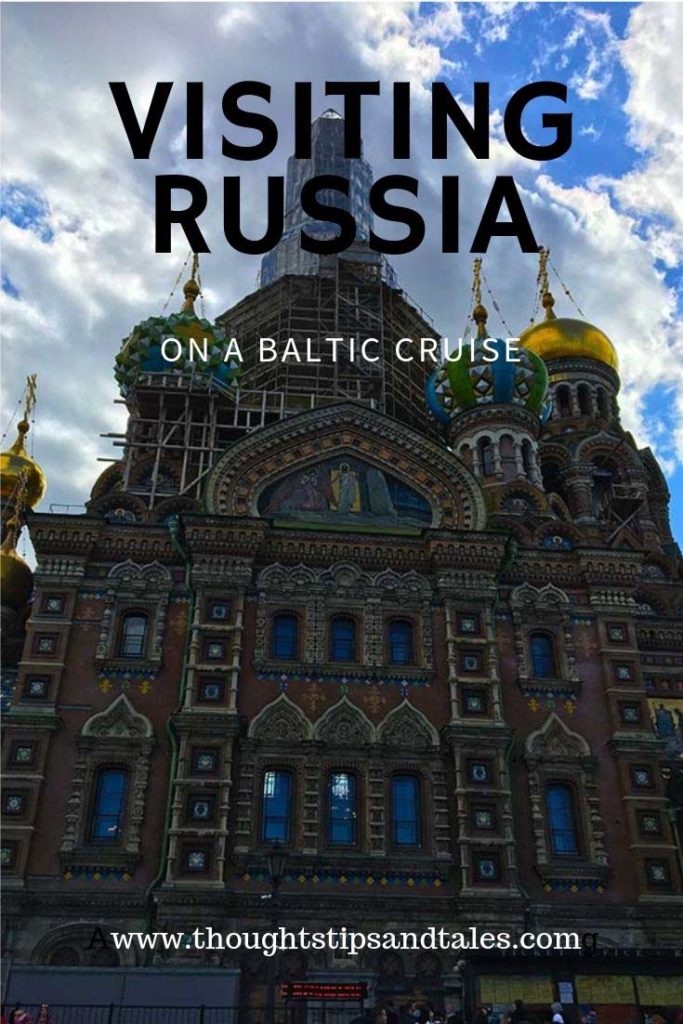 One place I never thought I’d go was Russia — but I spent two days in St. Petersburg on a recent Baltic cruise. And it wasn’t anything like I imagined. For starters, it snowed there in May!  Well into spring  when the Regal Princess docked in St. Petersburg, it snow flurried all day. On top of that, a bitter cold, gusting wind conjured up images of what Siberia must be like! 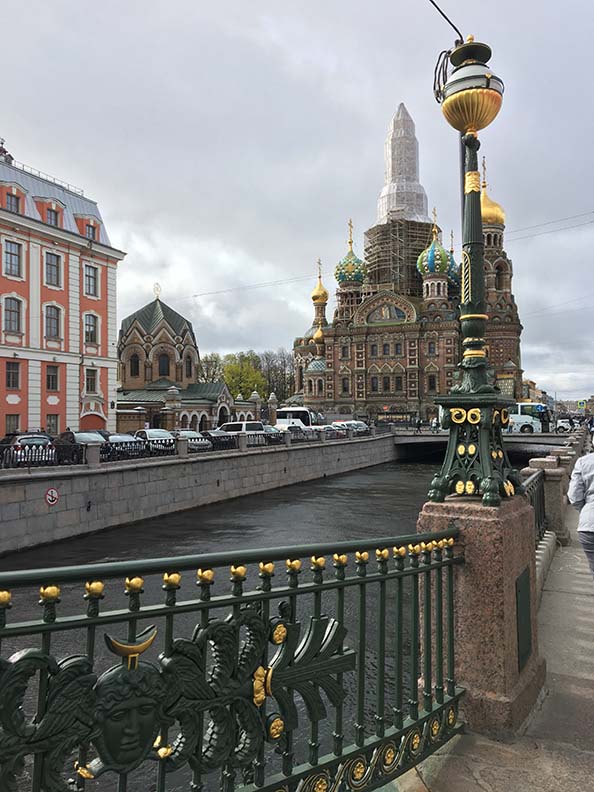 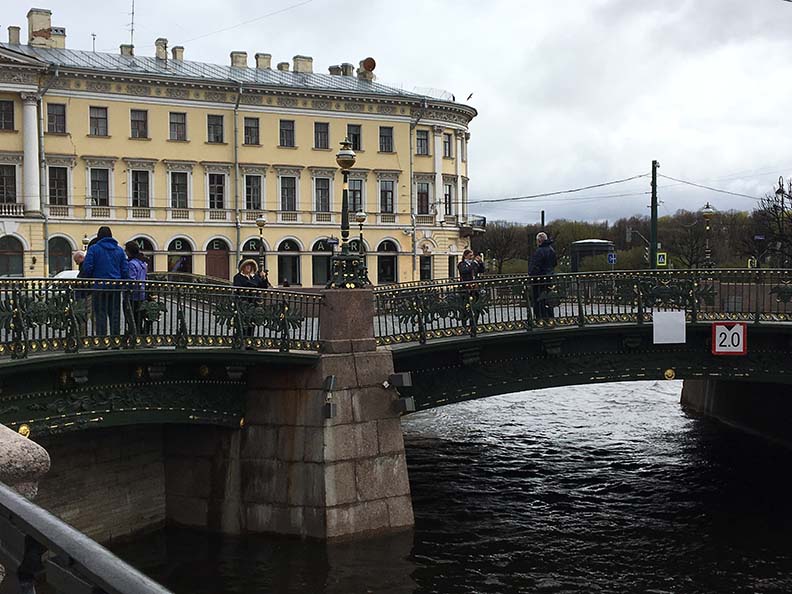 On our bus tour of the city the first day, we were surprised to see fancy gold fixtures on nearly all the bridges, railings and in public areas — and the architecture of many of the public buildings was beautiful.

First, we went to one of two rostral columns near the Stock Exchange — towers build in the Roman style on the Neva River. They were originally built as beacons and are now lit on ceremonial occasions; they’re considered to be a symbol of St. Petersburg. 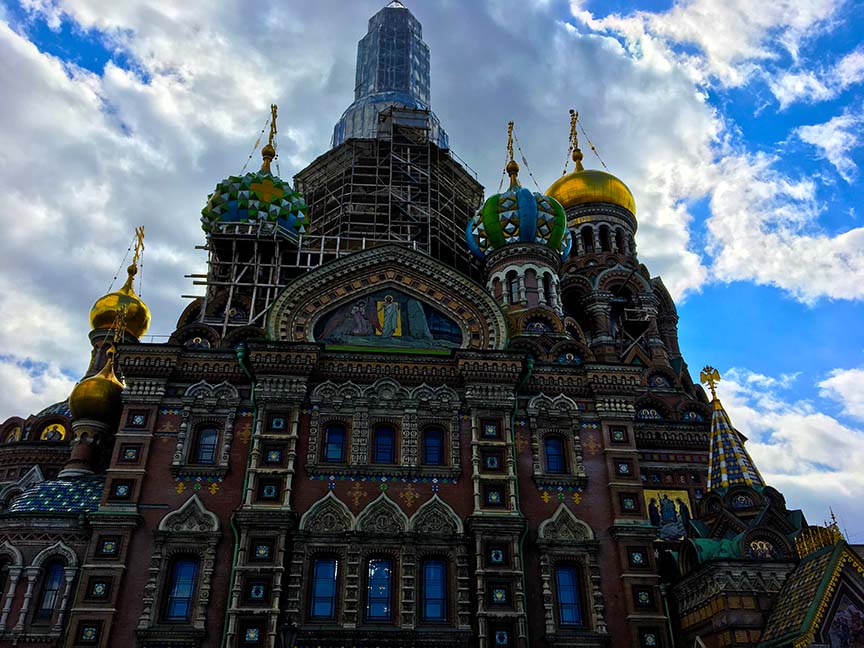 Next, we stopped at the ornate and colorful church everyone sees pictures of — the Church of the Spilled Blood — and got off the bus and up close to take pictures from the outside. Unfortunately, it was an overcast day and the large top spire was covered due to construction, so it wasn’t as colorful as it could have been, but it was still amazing. 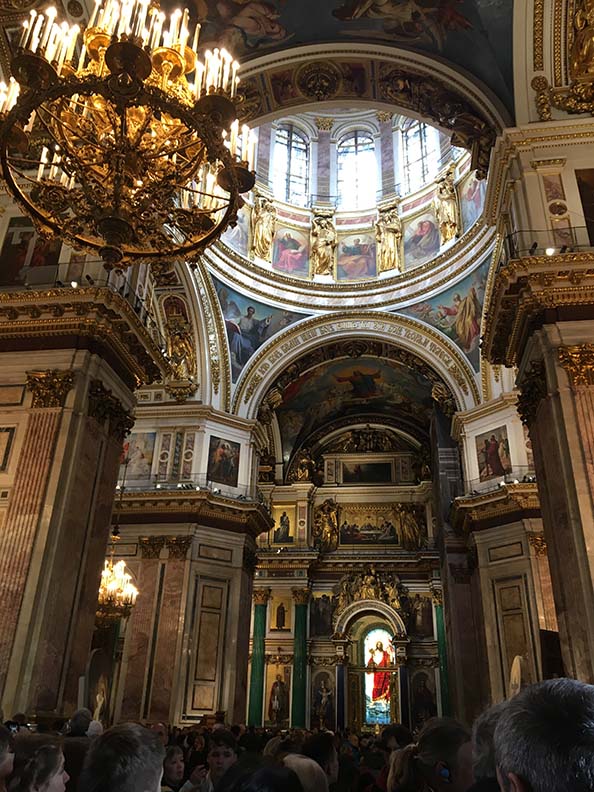 Then we toured inside St. Isaacs Cathedral – formerly a church and now a museum. 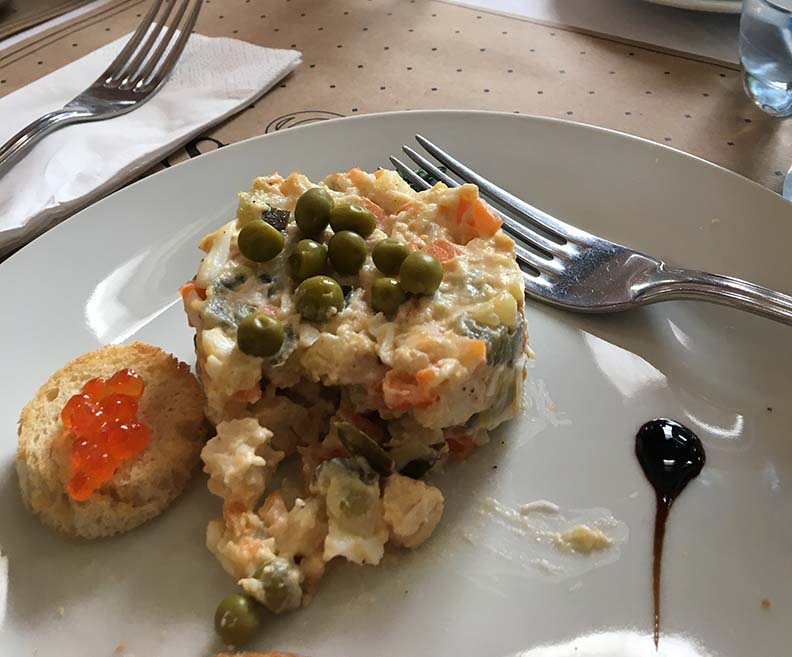 We went to a very elegant restaurant — the Last Palace — for an authentic lunch served at a large table with other members of our tour, and I have no idea what they gave us for the main course!  (It was a clump of something with peas on top that I’d have to rate two thumbs down; someone said later it was potato salad…) But I did have some vodka with it! (You can’t go to Russia and not try Russian vodka…) They also served caviar, champagne, and beef stroganoff, with apple pie for dessert.

The real adventure that day, though, was a tour of The Hermitage — a huge, extremely ornate art and culture museum that’s second in size only to The Louvre. 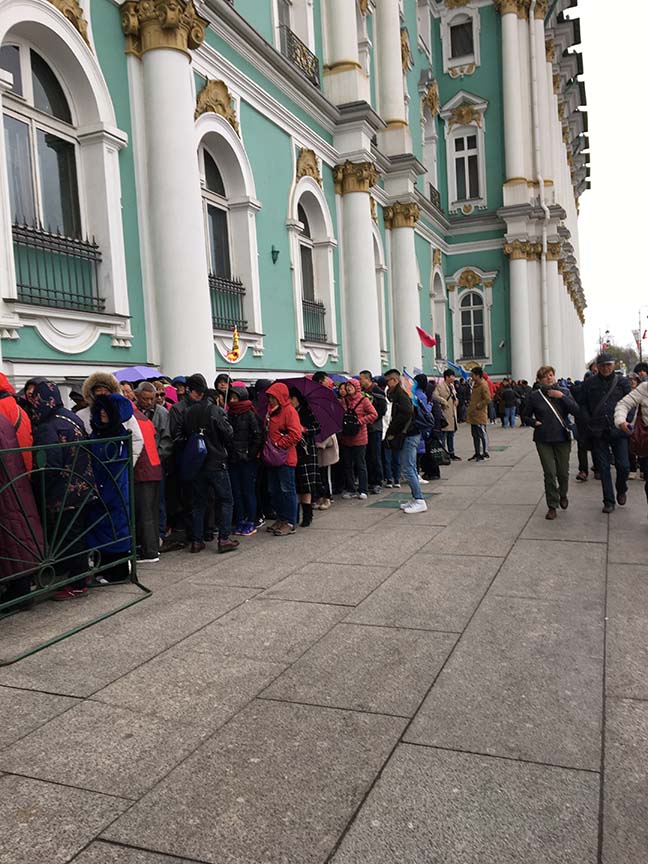 Our tour guide booked us for a 2:00 tour , but it turned out to be a Russian Orthodox holiday and all the Russians were off work (and in line outside the entrance of The Hermitage.) Despite the reservation, we shivered in the freezing cold weather with heavy jackets, hoods on, gloves, scarves and more while the wind whipped around — for about 40 minutes before we made it inside. Really got a chance to experience authentic Russian weather there!

The tour guide told us we’d have to leave our coats in a cloak room but once inside, apparently the cloak room was full (and it held thousands of coats!), so we were told to sling the jackets over our arms. She provided us with a headset and earphones so we could hear her explanation of the pieces of art we were seeing.

Then the fun began.

I have never, ever been in such a huge crowd anywhere in my life — with people shoving in front of us from every angle, and physically pushing us. For the entire two-and-a-half-hour tour, I clutched my purse to my chest (they’d warned us about pick-pockets) and kept an eagle eye on the sign our guide held in the air the entire time, struggling to hear the tour guide and look at the artwork. 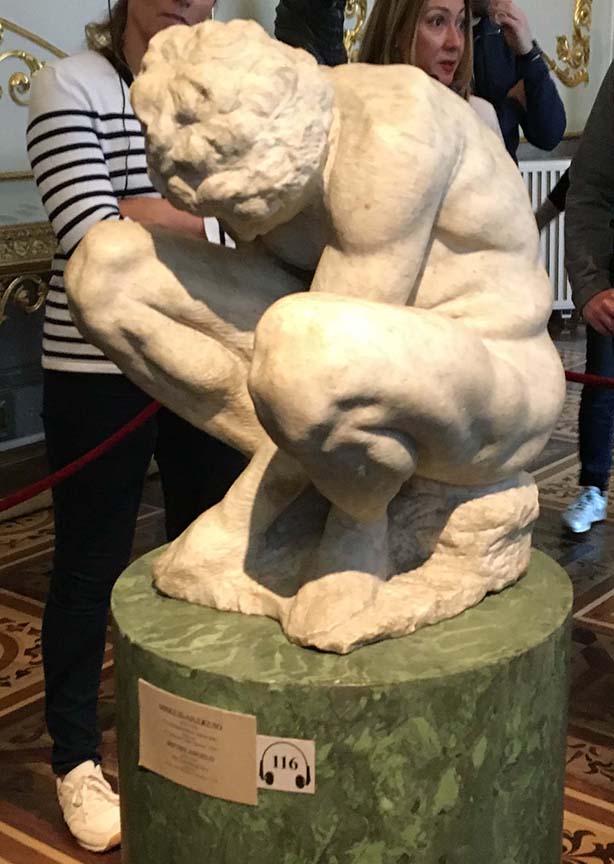 The museum had an unfinished sculpture by Michaelangelo, works by Raphael and Leonardo DaVinci — and much, much more. 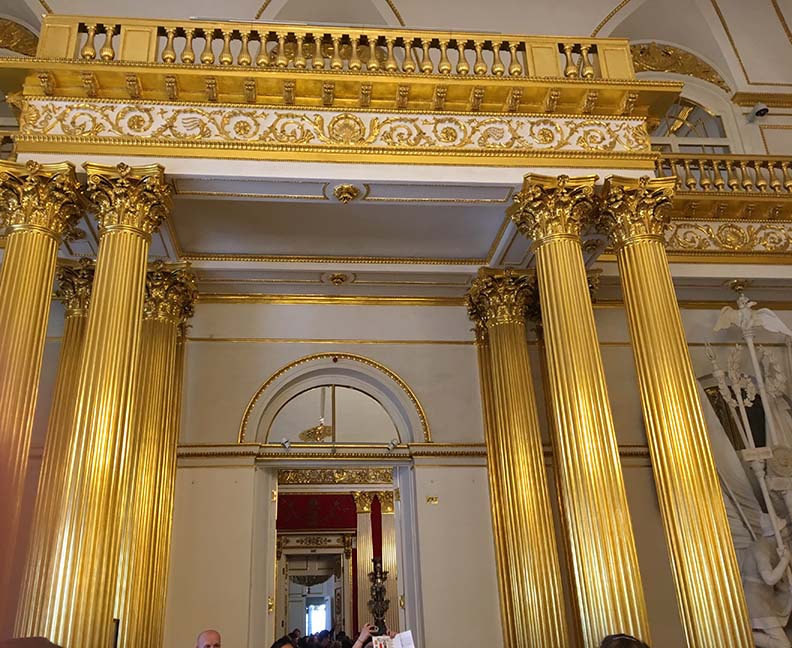 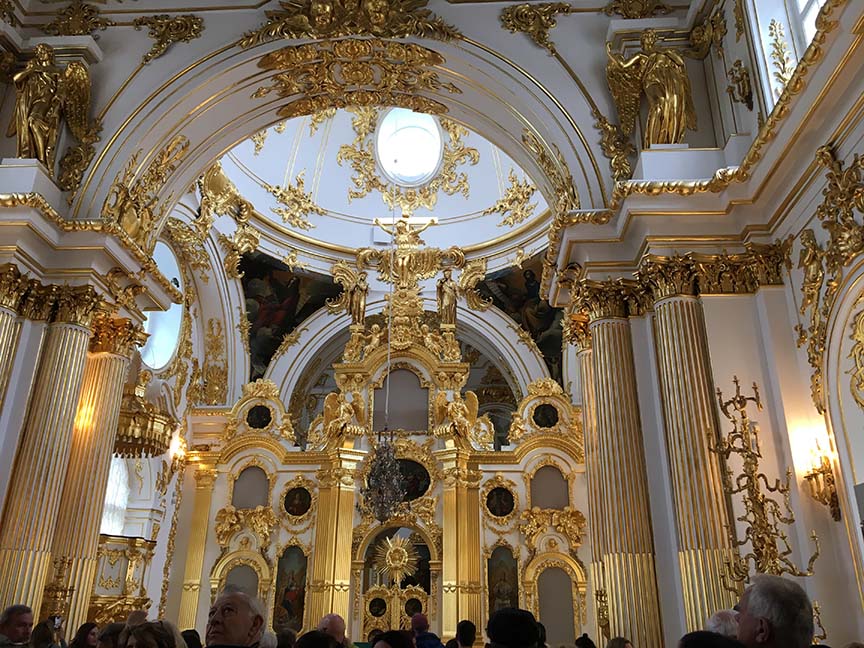 If we’d gotten lost, we would’ve never found our group again! (The massive museum encompasses 5 huge buildings and contains approximately 1,500 high-ceilinged rooms — many of them featuring massive gold leaf doors, columns, ceilings and wall fixtures — and it felt like we toured each of them. We were so terrified of losing our guide that we couldn’t really appreciate all the fabulous art surrounding us!

On the last part of the bus tour, the guide, Tatiana, told us that the average salary of workers in St. Petersburg equals about $500 US a month. It appeared that nobody owned a car, because there was virtually no traffic on the roads.

Tatiana also told us that apartment buildings are known by the name of the Russian leader at the time they were built — Khrushchev apartments, etc., and that 95 percent of Russians live in them. She was surprisingly honest in her tales of everyday life — saying people were sometimes on waiting lists for a “better” apartment for 20 years or more!

The story that horrified me the most was when she showed us a large building, previously belonging to a political figure, and said it had been converted to small, separate flats inside, where 40 people shared a single bathroom and a single kitchen. 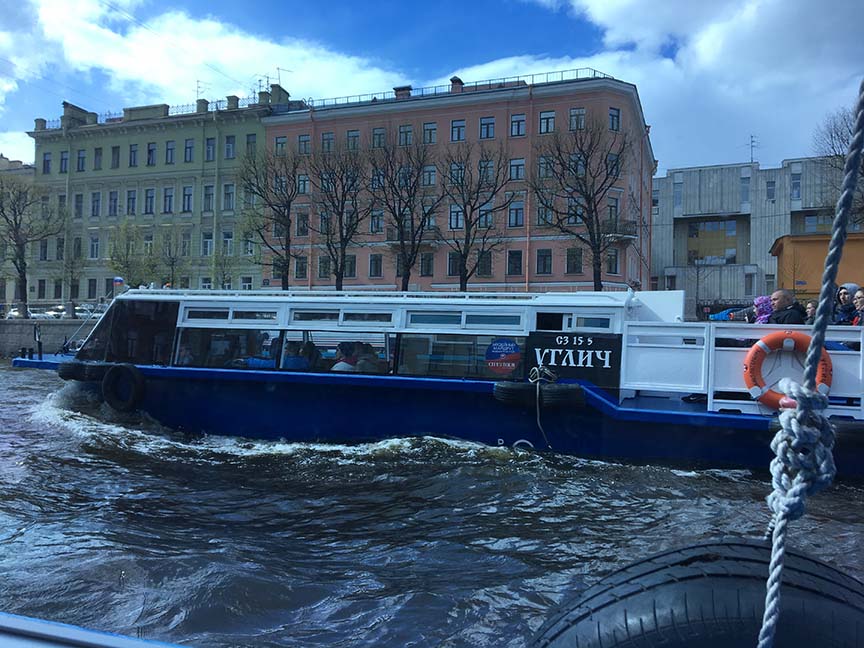 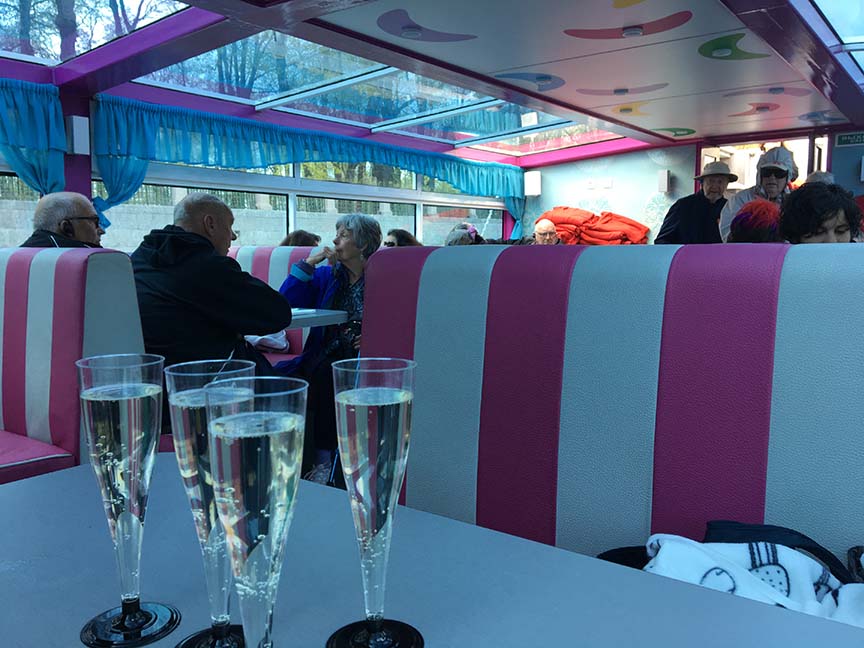 The second day’s excursion was much calmer, and the snow and wind stopped, so the weather was a little better, too. That was good, because we’d pre-selected a river boat cruise; fortunately, the boats were low in the water and enclosed — very comfortable inside due to the sun outside. They even served champagne! We got to see other views of buildings we’d seen the first day on the bus tour.

One of the shore excursions we didn’t pick was a trip via bullet train to Moscow. We would’ve loved to have done that, but it cost $600 each! We did talk to a few people the next day who went on it and they told us they left very early in the morning and got back way past midnight and the train ride was about four hours each way. They said Moscow buildings were very ornate, too, like those in St. Petersburg.

I was initially kind of leery about going to Russia and everything was fine,  but comedian Bob Hope summed out my sentiments about the two-day Russian visit perfectly:

We had a very successful trip to Russia. We made it back.

Amazing Copenhagen on a Baltic Cruise

2 Responses to Visiting Russia on a Baltic Cruise