15 Bucket List / Lifetime Goals Achieved So Far: The Dream vs. the Reality 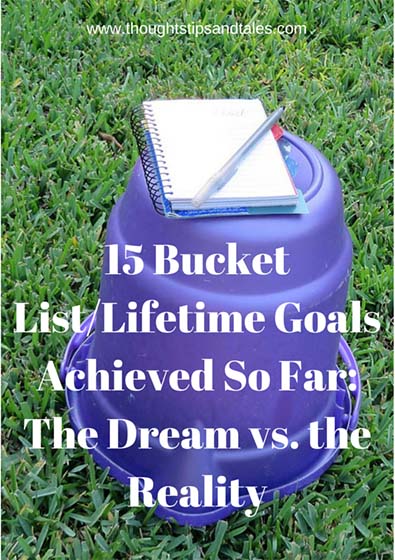 When you’re a child and a 20-something, you dream of doing many things during your life. Although you don’t formally label it a bucket list — or a lifetime goal — that’s what it is.

What childhood and early adult dreams have you accomplished so far? How did they work out?

Some great bucket list resources are available online at http://bucketlistjourney.net/2011/07/45-inspiring-bucket-lists-that-i-stalk/.

Here are a few of the bucket list items I’m accomplished — comparing the dream vs. the reality:

1) Dream: Be a teacher. Taught several college classes while I was working as a bank manager and during the years I was a stay-at-home mom. Was also a corporate trainer for a short time. Reality: Teaching was a lot harder than anticipated. One college class was held at 6 p.m. for working adults and lasted four hours. Even I didn’t want to hear myself talk for that long – but it was entertaining watching the students’ eyes roll back in their heads.

2) Dream: Write a book. Have completed two books – one a co-written self-published paperback (out of print now) and another an ebook currently available. Reality: Fun! A lot of work, though. Neither one made me rich, unfortunately…

3) Dream: Become a newspaper reporter. In my current job, I’ve been the editor of the organization’s employee newsletter for eight years and love it. Also co-wrote a weekly newspaper column in the local newspaper for two years with the friend who co-wrote the paperback book with me. Reality: Fun!

4) Dream: Work with computers. Have taught computer training courses, been a self-taught web developer and now a big blogger (at work and at home). Reality: Fun.

5) Dream: Get married. Reality: It didn’t work out that well.

6) Dream: Have a child. Reality:  It worked out very well! Have a wonderful son.

7) Dream: Travel to Europe. Went for a six-week trip during one high school summer, taking French classes in the mornings and sight-seeing in the afternoons. While there, we saw naked people in the play “Hair.” Reality: Fun!

8) Dream: Get a dog. Reality: It  didn’t work out real well once the puppy grew up and I realized I wasn’t a “big dog” person! (However, my son has an adorable dog that I just love — realize now that I’m a “small dog” person.)

9) Dream: Get a master’s degree. Reality: When I quit college to get married, it was sort of touch-and-go for a while, but I did it!

10) Dream: Travel to other continents. Reality: Took a cruise several years ago that started in Sydney, Australia, and went to Bora Bora and the nearby islands and ended in Hawaii. That was very, very cool — a trip of a lifetime! Also spent six weeks abroad in high school.

11) Dream: See the Western U.S.  Reality: Took a tour several years ago and visited the Grand Canyon and several other famous national parks. It was great.

12) Dream: See California. Reality: Took a trip last year and went to San Francisco (my very favorite town now next to Charleston, S.C.), San Diego and a few other nearby towns. Very fun.

13) Dream: Take a cruise. Reality: Have been lucky enough to take more than 13 cruises so far! It’s my favorite way to vacation.

14) Dream: Have crutches. That’s an odd goal for a kid, I realize, but it seemed glamorous and exciting. Reality: It really bites! Eight years ago, I broke my foot and had a cast, crutches and a wheelchair for four months during the heat of a South Carolina summer. Not fun. At all.

15) Dream: Use one of those poles with a nail on the end to pick up trash along the road. (Another odd childhood goal.) Reality: Volunteered at work last year to do a road clean-up on a Saturday morning and thought the big day had finally come, but they ran out of the sticks before they got to me. Instead, I bent over a whole lot and ended up with a bunch of mosquito bites and a backache the next day… Maybe next time!

How has the reality turned out for bucket list goals you’ve met?

Three Good Things: A New Twist on a Gratitude Journal

7 Responses to 15 Bucket List / Lifetime Goals Achieved So Far: The Dream vs. the Reality