Posted on January 26, 2015 by blogqueendiane 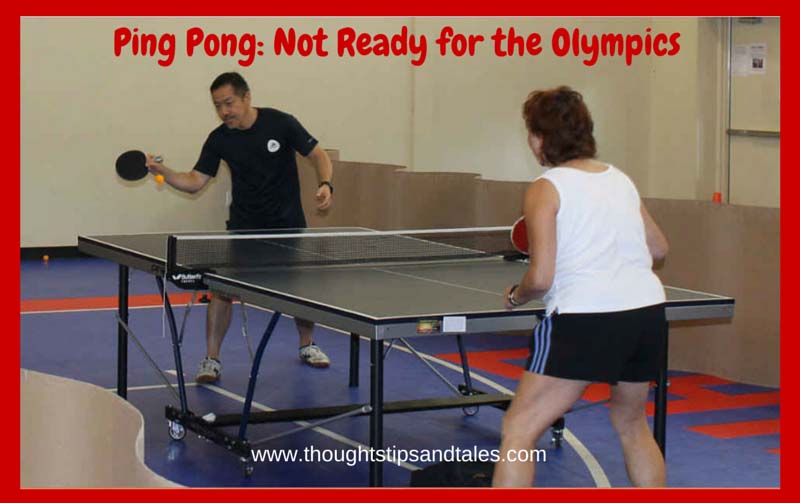 During September 2014, I published a post called Boost Happiness: Bring Back Fun Activities that Fell Along with Wayside. One of the things I always enjoyed and wanted to take up again was ping pong.

Now, most people with that goal who haven’t picked up a paddle in 10 years would find a table in an out-of-the-way spot and a kind-hearted friend, then play a few easy games to get back in the groove.

I read in the newspaper about the South Carolina state table tennis tournament being held in a nearby town in three days, and signed up. Never mind the years that had passed without playing; it’d be like riding a bike, right?

Since there were women’s categories in several age groups, I figured the chances of doing OK were good — because how many women my age play competitive ping pong? Or are foolish enough to enter a state-wide tournament?

It was a flawed plan (for several reasons) because, to my dismay, not a single other woman had registered. While in my dreams I thought they’d declare me the undefeated South Carolina champion, the coordinator threw me in to play with a bunch of seasoned male players from all over the state.

Five “best-of-three-game” matches, to be exact. Seems like it was some kind of a round-robin tournament (whatever that is).

About four sweaty hours later, I was proud to walk away knowing the score was not 11-0 for every single game (as I’m sure all the men thought it would be). Actually got 2 or 3 points on most games (probably because the guys were tired or taking it easy on me). It was definitely better than nothing!

Buoyed by my “over-zero scores” I joined the group’s weekly practice sessions, diligently driving to a local gym after work and playing for an hour or so with random people (mostly men).

It might’ve been fun, except the organizer (who was sort of fanatical about calling the game “table tennis” instead of ping pong — and about the game in general) immediately and relentlessly began to train me to become an Olympic-caliber player in the shortest time possible.

I tried to explain: Hey! Girls just wanna have fun!

But he wouldn’t hear of it.

I brought my girlfriend to practice one night for moral support, and the organizer zoomed over to our table within two minutes and instantly began to admonish her for using incorrect strokes. After she explained she hadn’t picked up a paddle in 20 years and just wanted to warm up — and he didn’t lighten up– she was wise enough not to come back.

After several months, I realized that — while nobody was outright mean to me at the sessions, nobody was friendly or nice to me, either.  And who needs that?  Also, all the fun of playing ping pong had been sucked right out of the game.

I reluctantly quit, too. (So don’t look for me in the next Olympics.)

But… I did dig up a couple tables and sponsor a ping-pong tournament at work and open “pay by the hour” ping-pong play for the annual federal charity drive at work. And I encouraged participants to relax and have all the fun they wanted!

28 Responses to Ping Pong: Not Ready for the Olympics