Posted on December 3, 2014 by blogqueendiane 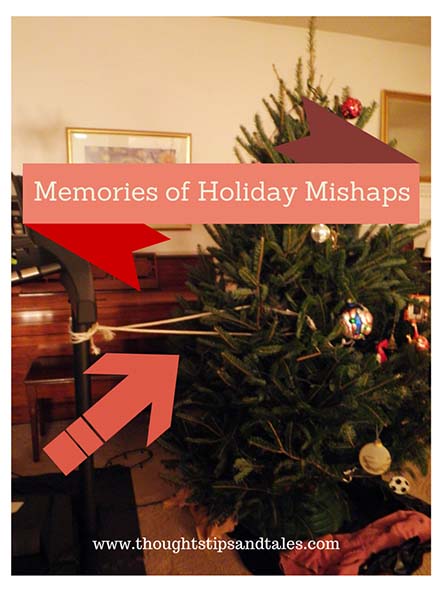 Seems like every Christmas, there’s a little snafu … and usually you can laugh about it later.  Here are a few of my holiday adventures.

1) Years ago, a cylindrical, glass deodorant container rolled off a nearby shelf and was flushed down the toilet in the single bathroom of our small apartment on Dec. 24, where one child and five adults were gathered for Christmas. Thank God we found a plumber willing to come on Christmas Eve (maybe he heard the panic in my voice when I called, as everyone stood by with crossed legs). He had to completely remove the toilet fixture, take it out in the yard to retrieve the container inside and reinstall it. We were all extremely grateful to be able to flush for the rest of the holiday!

2) Hard-wired smoke detectors in my house kept going off for no reason (always in the middle of the night) during December one year, and one day a fire truck full of firemen showed up at my house. (That’s when I learned detectors have about a 10-year life span and dust and debris can set them off randomly after that. Who knew? Even after I vacuumed them, they went off. ) The cost of new built-in smoke detectors and installation wasn’t my favorite Christmas gift that year…

3) Another year, the Christmas tree fell in the middle of the night and almost gave me a heart attack since it’s near the patio door and I thought someone broke in.  After that, it toppled continuously during December. In desperation, I finally tied it to the treadmill (yes, I have one in my living room) AND the piano legs with thick rope — and left it on during the whole month of December until my dad and brother-in-law (both engineers) came for Christmas and rigged up a way to keep it upright. (Doubt if Martha Stewart would’ve done that.)

4) That year (due to the tree constantly falling over) and the following year (due to a leak in the tree holder), all the water leaked out of the stand. Two gallons of water makes a nice little moat around the tree.

5) When my son was small he could recognize his name, so he opened Christmas presents that were FROM him, in addition to the ones that were to him. I still remember the horrified look on his face when he unwrapped a woman’s sweater (to his grandma from him and me) and said, “Hey! This is a ladies sweater!”

6) When we were kids, my mom was the master of hiding gifts. The only thing is… she didn’t remember where some of them were until Easter. Out of the blue, she’d ask, “Did I give you girls diaries for Christmas?” When my sister and I said no, she disappeared into the attic and came back later with two of them in her hands. Good hiding, mom!

I hate to admit it, but when my son was young and presents needed to be especially well hidden, several time I came up with “bonus gifts” after Christmas, too…

7) This incident happened last year, and it may never be funny… I had a house full of guests over Christmas and it was kind of chaotic. My parents were in my car and I was taking them out somewhere. My son and his wife had just come in from some activity and were getting ready to go out again.

When I backed my car out of the driveway, I didn’t look behind me  (because nobody ever parks across the street from it) and backed right into the driver’s side of the expensive new car my son’s dad had just bought him. (He’d parked there since they were just running in to the house.) Talk about your heart sinking… The annual bonus I got at work barely paid for the car repairs — but now I always remember to look behind me when backing out of a driveway 🙂 .

December wouldn’t be the same without holiday mishaps, right?

15 Responses to Memories of Holiday Mishaps